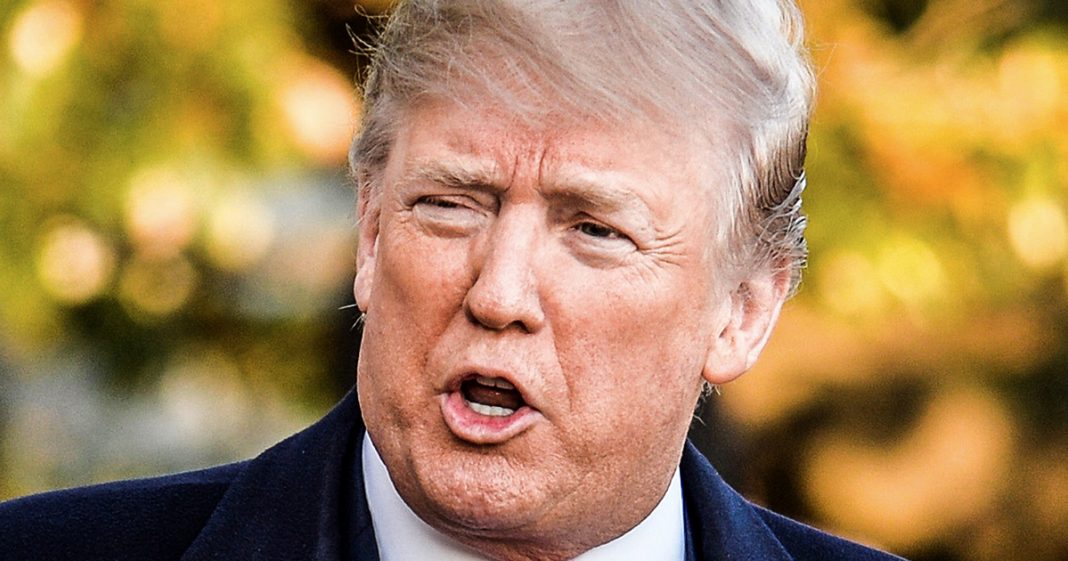 Donald Trump has once again shown us how little he knows about energy this week when he said that wind power is not a viable alternative because the wind only blows “sometimes.” Not only is this incredibly naïve, but it proves that this man is going to say whatever stupid thing he has to in order to hinder our country’s ability to move beyond fossil fuels. Ring of Fire’s Farron Cousins discusses this.

Last night, Donald Trump decided to call in to Sean Hannity’s program as part of his victory lap over William Barr, his attorney general exonerating him, even though the Mueller report specifically says, this is not an exoneration of Donald Trump. But nonetheless, Trump calls into Hannity show when he’s talking about how tough he’s been on Russia and how much he doesn’t like them and they’re controlling the oil. But okay, the alternative to that, to that oil that Russia is trying to control according to Trump, is wind power here in the United States, which Trump tells us it’s just not feasible because sometimes the wind doesn’t blow and then what are you do? I guess then you have no electricity.

Here’s exactly what Donald Trump said. You look at the fact that we would have been powered by wind, which wouldn’t have worked by the way, because it only blows sometimes and lots of problems come about now. Just a week ago, according to the hill, Donald Trump told the crowd that, you know, when power doesn’t work all the time because it’s not always windy and therefore people would have to, you know, turn their TV’s off because the wind’s not blowing. Essentially trying to scare people into thinking that if the wind’s not blowing, you better turn off all of your appliances because there’s going to be no electricity. These statements coupled with his past statements that windmills just kill birds left and right, which even the, the u s department of Energy says, yes, that’s not true at all. Uh, tall buildings actually kill more birds than wind turbines. They wind turbines move very slowly.

Birds just go out of the way, you know, buildings with their clear glass windows. Yes, birds crash into those all the time and die when Mel’s not so much. They tend to be able to see the big white moving thing and they simply get out of the way. But nonetheless, Donald Trump has launched this weird attack on wind power here in the United States, and I’m not quite sure why, other than the fact that he wants us to continue to use fossil fuels, which again, still doesn’t even make that much sense. He doesn’t need fossil fuel money to fund his campaigns. So why? Why the attack on wind power? What does it, what does it matter to him? Okay, let’s get something straight though. The the U s energy grid would not be made to solely rely on wind power.

It would have a combination of solar, you know, geothermal, hydro electric power if needed. We have all sorts of other renewable options that when working together would be able to supply a constant source of power for the United States. But when mills themselves don’t even need that much wind, these things are over 320 feet tall and the higher up you go from the earth’s surface, the more likely it’s going to be that there is a constant steady source of wind. That’s why when you’re up in an airplane, 35,000 feet in the air, 30,000 feet in the air, and you look at the little wind speed outside thing, here’s winds of 80 miles an hour. It’s like being in a hurricane, so 320 some odd feet up in the air, I think 328 feet. Yes, there’s typically a a bit of a breeze and you only need a wind of nine miles an hour to spin the blades on a wind turbine.

See, these are little fact limits that you can learn from seriously just a few moments of research online. It doesn’t take that much, and yet Donald Trump refuses to do that and instead continues telling us that if there’s no wind, there’s no power. If there’s windmills, there’s dead birds. It doesn’t make any sense. But Sean Hannity didn’t bother to correct him. Sean Hannity, he didn’t want to tell him how things work most likely because Sean Hannity has no idea how things work and this is how the disinflation continues to spread. You get one idiot Trump calling into another idiots show watched by a couple million people, Hannity saying something stupid. The host doesn’t refute it, and therefore those few million people watching the show think that that is the way things are. Folks, seriously, every now and then go online. Do a few minutes, just a few minutes, two minutes of research. You’d be amazed at how much you can learn for just trying to go out there and fact check on your own. The information is out there. It’s not hidden by anything. The only thing stopping people from accessing it is their desire to not know the truth.