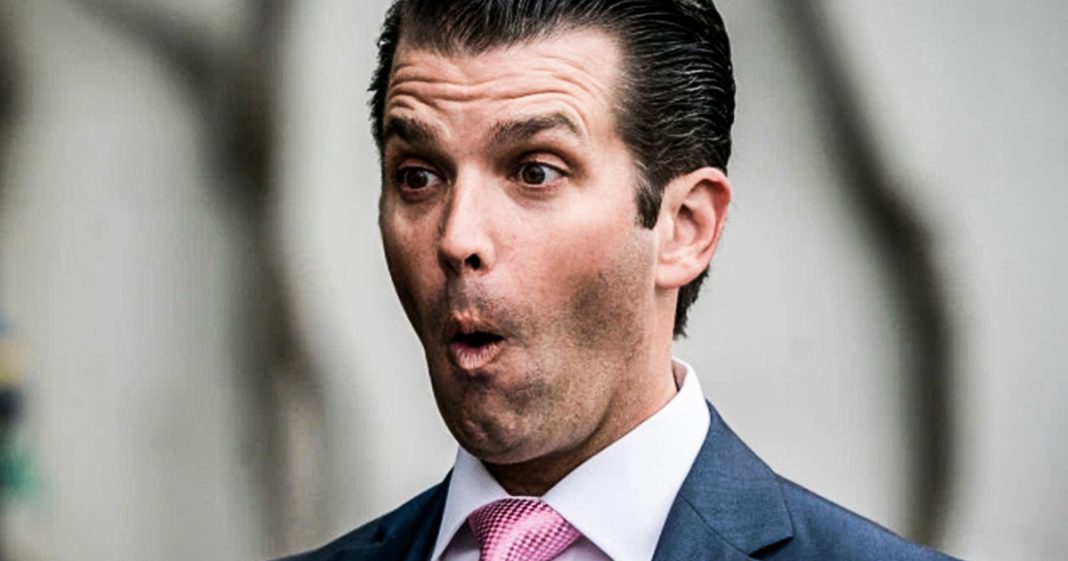 On Wednesday, Donald Trump, Jr. again told the world that he is not ruling out a future run for office, and now that he and his family feel emboldened by the Mueller report (or at least William Barr’s interpretation of it) he feels like the wind is at his back and he can do anything. Another Trump in office certainly would not be good for the American public, but there may not be much that can stop Junior, as Ring of Fire’s Farron Cousins explains.

On Wednesday of this week, Donald Trump junior was a guest on Bloomberg radios show sound on and he wants again, hinted at the fact that he wants to run for office some time in the very near future. Well, technically not even in the very near future, but just in the future. Here’s what junior had to say. I never want to rule it out. I definitely enjoy the fight. I definitely like being out there and I love being able to see the impact and the difference that it makes on these people’s lives that I get to see all over the country. My father decided to get into politics at 68 I’m 41 I’ve got plenty of time and the sad thing is that he does. This guy does have plenty of time. He has plenty of time to be properly groomed by the Republican party to meet with advisors, to meet with speech writers, to meet with all kinds of people to make him a better candidate.

Something his father didn’t bother to do yet somehow still won the electoral college vote and became president. That’s what’s so frightening about this and you want to add another layer of terror to the thought of Donald Trump Jr becoming president some day. Think about this. He also said later in the interview that he’s very relieved that the Mueller investigation is done in that he obviously has been cleared of any wrongdoing even though he did, you know, tweet out those emails where it showed that he was really trying to collude with somebody’s. But nonetheless, I guess he’s been cleared. Maybe we’ll know more if the final report ever gets released, but he feels vindicated. He feels exonerated and that’s all that matters. The facts don’t matter at this point folks, he feels like he has been vindicated and he is going to act as if he has been vindicated and that’s what he’s taking out there with him on the road right now.

We are going to see a hell of a lot more of Donald Trump Jr as this administration continues to move forward. And that’s a scary thought. Here’s another scary thought. If in fact, Trump Jr is being groomed to run for president once his father leaves office, uh, then suppose Trump wins again 2020, which is not a crazy a, a theory. If Trump wins again in 2020 Trump, junior then could hand over control of the company solely to Eric or Ivanka could leave the administration, take over Trump Jr’s role in the Trump organization, and then junior moves into the White House, starts to learn how things work, gets to use that as experience to launch a 2024 presidential bid. Now, these are all just theories, but anything is possible. And given the fact that this guy over the last few weeks alone has repeatedly hinted at wanting to run for office someday, I think these ideas are very plausible. And depending on how the next two years work out for Donald Trump himself, we could unfortunately be looking at Trump Jr for president in 2024. And that is not something that should leave any American citizen feeling good or confident about the future of this country.