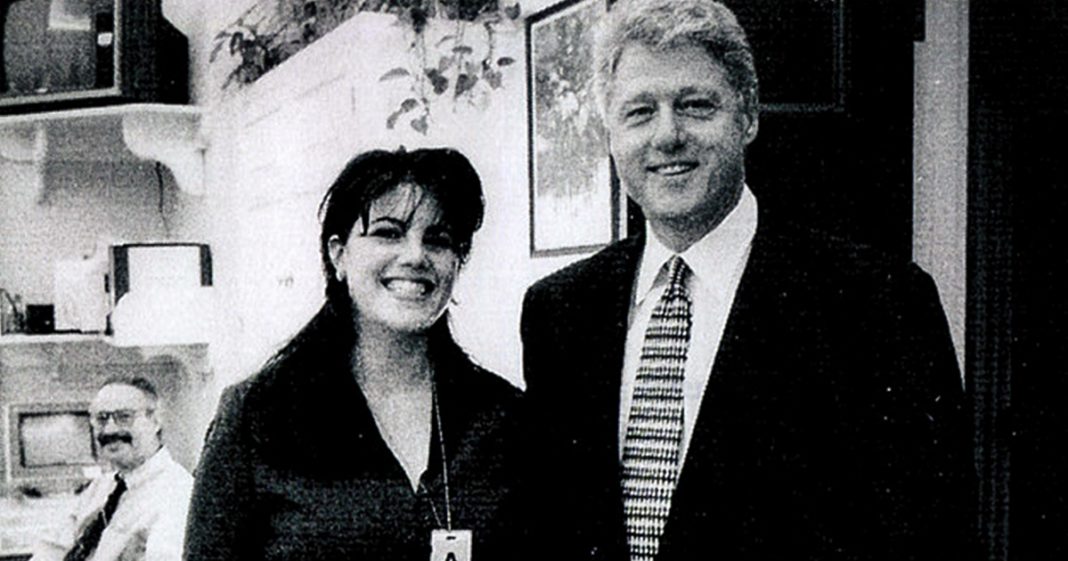 Monica Lewinsky “won the internet” yesterday after her three-word response to a hypothetical scenario in which Ken Starr’s report had received the same treatment as the Mueller report. Monica’s response reminded the world that she was stigmatized for the events, betrayed by her friends, and will bear the mark of that affair forever, even though she was a victim. Ring of Fire’s Farron Cousins explains.

Yesterday man by the name of Orin Kerr who happens to be a law professor at the University of Southern California tweeted out the following. He said, imagine if the star report had been provided only to President Clinton’s Attorney General Janet Reno who then read it privately and published a four page letter based on her private reading stating her conclusion that President Clinton committed no crimes. Now Professor Kerr here is obviously talking about the fact that we still don’t have the Mueller report. The public doesn’t. You’ve got all kinds of people out here making outrageous claims about it that either it completely exonerates the president in all democrats are dummies for thinking that it could have something in it. Then you have others on the other side who say, nope, this is a big ole conspiracy. The report definitely shows Trump committed all these crimes. Give us the full report and then you have those who say, you know what?

How about you just release it? Everybody can read it and then we can all understand and be on the same page and move on in whatever direction we need to move on. That is the rational decision, but regardless, curves, pointing out the hypocrisy of Republicans for the Star report saying, hell yeah, get that out to the public right now. 436 pages or 453 pages, shoes me, get it out to the public Mueller report. Technically we don’t even have a confirmation of how long it is and the Republicans, Mitch McConnell yesterday for the second time, blocked a resolution to call for the release of the report. All we know is that bar is going to work with Mueller, allegedly possibly Rosenstein to, uh, you know, come up with some snippets, the hand out to the public. We may never get the full thing at least until the Democrat finally retakes the White House and says, send it to the presses. We’re getting this out there. Finally, God only knows when that’s going to be. But nonetheless, right? We don’t know what’s in there. But we knew what was in that Clinton report. And so in response to Professor Kerr’s tweet, okay, one woman chimed in with three simple words that absolutely one the internet and exposed Republican hypocrisy, that woman was Monica Lewinsky and her not quite safe for work response was if fucking only and Monica Lewinsky knows exactly what she is talking about and she knows exactly what kind of damage can be done by a single political party attempting to take down a president by any means necessary. The backstory of the Lewinsky scandal that I’m not sure a lot of people paying attention to politics today even know about or remember about Lewinsky can fight it. In Linda Tripp, her friend, fellow employee at the White House told her everything that happened. Trip then began secretly these conversations. Lewinsky didn’t know about it. Lewinski didn’t want people to know about it. Then events, she eventually trip took it the Ken Starr. Then eventually from there the story leaked out and that’s how Monica Lewinsky’s name came out. But then after the investigation, the full report came out, Monica Lewinsky’s name all over the news again, we knew exactly what happened. We knew who was involved and this woman who was just a victim really, she was a victim.

Okay. Her image was shattered. I had whatever future she thought she may have had suddenly came crashing down in front of her. Her life, at least for the time being, was absolutely ruined by these Republicans and we shouldn’t have even known her name. It wasn’t relevant to the story. It wasn’t relevant to the investigation. It’s certainly wasn’t necessary for the American people to to know it. But we do. And it’s very sad that from here to eternity, the name Monica Lewinsky is going to be associated with one thing and that’s not fair to her. So when we have this Mueller report sitting there and the Doj right now that could contain information implicating other people exposing how fragile our election processes. Talking about other organizations who are not Russia, who’ve infiltrated political parties, cause you know, wiki leaks got into both the DNC and the RNC. Those are things the public actually needs to know about. Meanwhile, somebody like Monica Lewinsky, there really is no reason for any of us in this country to even know who she is. And the only reason we do is because of political party, wanted to tarnish a sitting president. That’s not what’s happening here, but it is what happened in the late nineties.