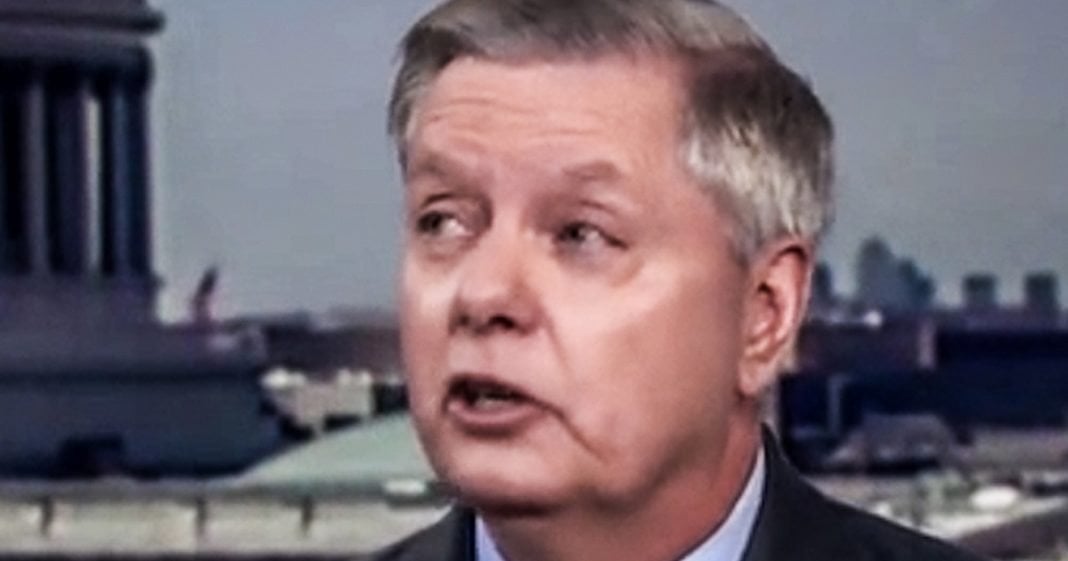 Lindsey Graham has taken a lot of heat over his bizarre flip flop on Donald Trump, and he told CNN this week exactly why he changed his mind. The truth is that Graham is excited about having access and power, showing what this man has really been about his entire career. He wants more than he could ever achieve on his own, so he uses those closest to him to achieve those ends. Ring of Fire’s Farron Cousins discusses this.

Lindsey Graham has taken a lot of heat recently over his body. President Donald Trump, mocking and attacking his old buddy, deceased United States senator John McCain. And so this week, Lindsey Graham finally decided to go on CNN and explain why he was basically in the middle of this fight and why he’s taking Trump’s side on it. Here’s the clip dynamic policy, and we’re going to continue to help him to all those people who bring up this narrative. You just take Trump. You don’t really care about McCain in me. I know this. This is a game you’re not offended about me and McCain. You’re trying to use me to get to Trump. I’m not playing that game. If you think the only way to honor John McCain is to tell this president, I won’t work with you. I will never help you. That’s your agenda, not mine. My agenda is to fold on or my friend for the rest of my life in every way I can and help this president be successful. And I’m not into this idea. The only way you can help, uh, honor John McCain is to trash out Trump. President Trump has been good to me in the sense he’s allowed me in his world. He’s made decisions, I think based on some input I’ve given him, he’s subject to changing his mind. I want him to be successful. I’m the senator from South Carolina and I’m going to do what the people in South Carolina want me to do. Help me this present successful three, two, one.

Okay. So first of all, at the start of that clip, Lindsey Graham really is just rambling and not making any sense whatsoever. You’re, that’s your problem, not my pro. His whole reasoning and rationale kind of got lost in a jumble of incomprehensible words there. So he’s trying to tell us, I guess that he still likes John McCain, but he also likes Donald Trump. And he’s not going to take a side in this fight because as he goes on to explain, Trump has let me into his world. I’m a part of it now. Like the little mermaid being part of their world. I guess that’s Lindsey Graham, the little senator. Um, so now Graham explains even further why he has acted the way he has and why he’s flip flopped on Donald Trump. And he says it very clearly. He says, I think based on some input I’ve given him, he makes decisions.

That’s it folks. That’s what we’ve been looking for. That’s what we’ve been waiting for. There has been speculation for months about why Lindsey Graham suddenly had the change of heart and went from being totally anti Trump too big in Trump’s back pocket, playing golf with him being best buddies with him. And that’s it right there. Lindsey Graham wanted access. Lindsey Graham wanted power and Lindsey Graham understood that he was never going to get the kind of power that he wanted on his own through his own merits or you think about it, Lindsey Graham would never survive it. Presidential race, we’ve, we’ve, we’ve seen it. Lindsey Graham is never going to achieve a higher office than what he currently has. He’s not going to appeal to people in this country outside of South Carolina, but he wanted more power. So he, throughout the course of his career, really has latched himself onto people more powerful than him.

John McCain, John McCain did have broader appeal. Obviously not enough to win a presidential election, but go to any state and you’re going to find people who really like John McCain and Lindsey Graham wanted to be a part of that because he thought if McCain gets more power, I can get more power being his friend. Well, it didn’t work out so well. They’re so now Lindsey Graham is now hitched his wagon onto Donald Trump. You have the power that I will never have, and as long as I have your ear, by extension, I get a little bit more power myself. That’s what Lindsey Graham has been after, and that’s why he’s made this sudden change. It’s not because there’s any kind of compromising information on him is some conspiracy theorists have been saying. It all comes down to the fact that Lindsey Graham has just a crappy human being who just wants to have a little bit more power. And finally with Donald Trump, he’s starting to get it. Apparently.