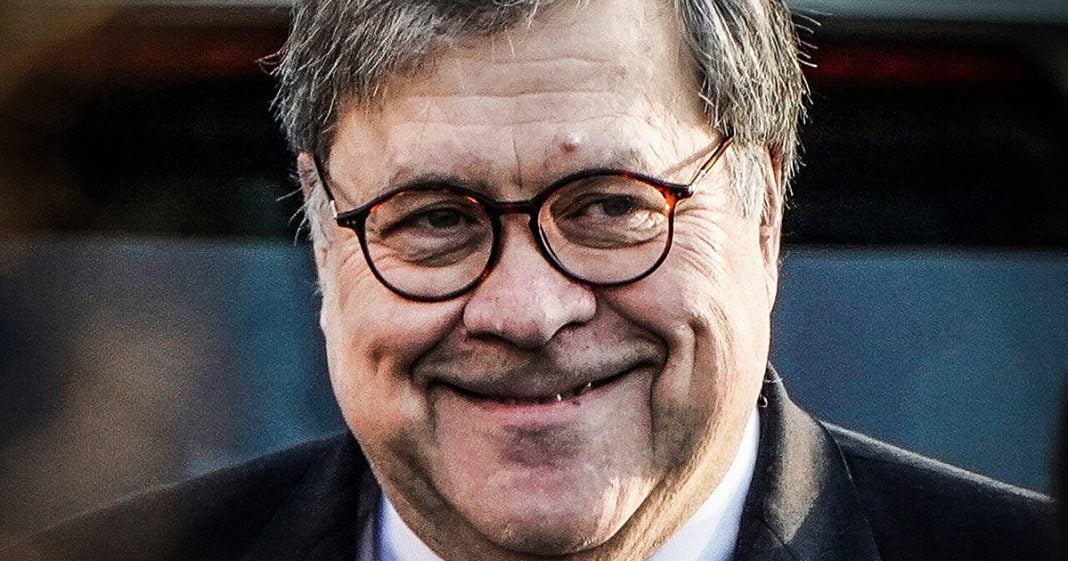 Attorney General William Barr sent a letter to court earlier this week where he attempted to have the entire Affordable Care Act struck down. His reasoning is very flimsy, and it isn’t likely that the courts will agree with him, but this just proves that the administration has no idea how to handle American healthcare issues and that they don’t care if tens of millions of people lose their insurance. Ring of Fire’s Farron Cousins discusses this.

Yesterday. Attorney General William Barr submitted two sentences to a federal court of appeals and those two sentences were to write in support of a case that the appeals court is hearing from a judge down in Texas where the judge down in Texas said that the entire affordable care act, Obamacare has to be scrapped. It’s unconstitutional. You cannot enforce it. The entire law has to go and William Barr, Trump’s handpicked attorney general sent a letter saying, hell yeah, make it happen. Well then the administration conceited that, yeah, we know this court case is a bunch of bunk. We knew at the time that it wasn’t going to survive on appeal, but we had to get this little brief filed, which that was a brief brief because we want to show that Republicans are going to do a better job on healthcare now. They haven’t offered any alternatives. They still don’t have an actual plan.

In spite of talking about it for a decade now. That’s how long it’s been folks, 10 years and these more ons can’t come up with a plan yet. But the administration did in admitting that obviously this isn’t going to go very far, that maybe we just scrapped part of it like the part of the affordable care act that requires private insurers to cell coverage at the same price to healthy and sick people alike, Aka the preexisting condition clause. So the Trump administration is actually arguing right now that if we can’t kill the entire affordable care act, let’s just kill the part that protects people with preexisting conditions, which would essentially, you know, make the entire affordable care act worthless. Yes, we’d still have the Medicaid expansions, but because the Trump administration has already cutting back Medicaid, those expansions are going to become retractions pretty soon and they want to get rid of the preexisting conditions, which means all of the people who’ve been able to finally get health insurance and pay a reasonable price for it, that’s going to go away if the administration has their way.

In spite of the fact that Donald Trump promised us, like he has so many times on so many things that the Republican party was going to be the party of healthcare and they were going to be the ones to protect people with preexisting conditions. Well guess what folks, that’s just a another lie from this man who seems to not be able to stop lying about every single thing. That’s what’s crazy about it. Don’t ever believe a word this man says, but here we are once again in this situation where Republicans are trying to get rid of the affordable care act kick roughly 40 million people, uh, somewhere between 20 and 40. I forget the exact number, but 20 and 40 million people, I guess kick them off their insurance, Jack up the prices for people with preexisting conditions while still claiming that they have a better plan. They just don’t exactly know what it is yet.

You had 10 years, if you’ve been wanting to do something for 10 years and you finally have the ability to do it and then you sit down and realize, oh crap, I didn’t come up with a plan then. Yeah, stick with what we got for now. Republicans don’t ever want a plan though that that’s the point of this. They’ve had 10 years, 10 years to come up with an alternative and they failed you. I mean, you’d think maybe once in those 10 years they could just get together and say, hey everybody, let’s just kind of sit over here for a long weekend and just kind of hash this out so we have something to offer the public. But they couldn’t even be bothered with that. All it was was repeal, repeal, repeal, replace. Whenever we come up with an idea, but we’re Republicans, so we don’t actually have ideas. That’s what we’re dealing with with regards to healthcare here in the United States. Meanwhile, you’ve got Democrats on the other side coming up with plans for Medicare, for all coming up with less say ambitious and less good plans like Medicare. For those who want it, it’s not going to work. Republicans have lost the healthcare debate, so the only trick they have left in the book, as we saw from William Barr’s, letter to the court, is to destroy the few good things that the Democratic Party has actually done on the issue of healthcare.