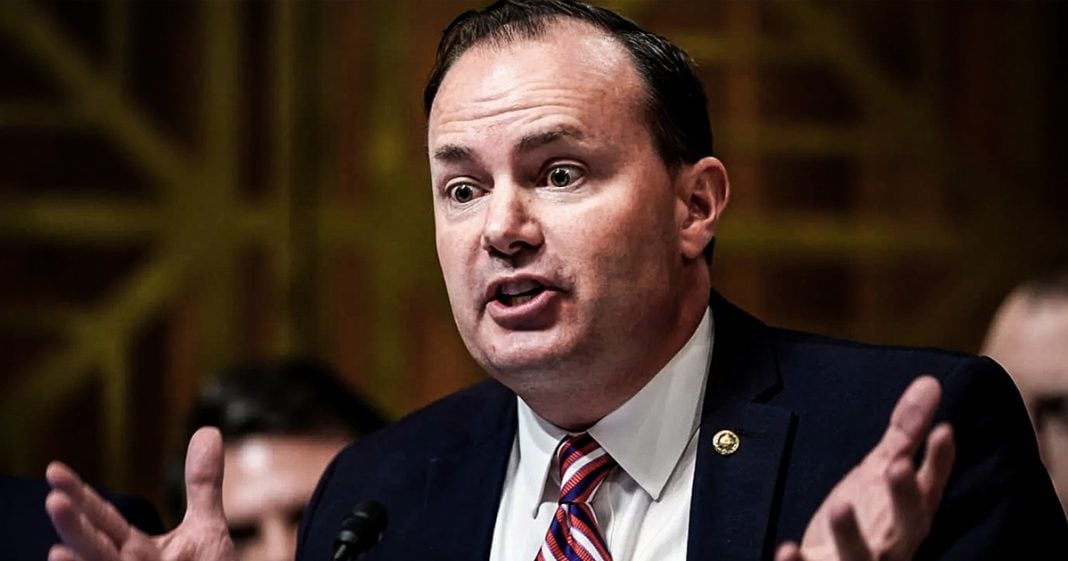 Republican Senator Mike Lee is trying his best to win the title of Dumbest Republican In Office, and his little performance on the floor of the Senate on Tuesday certainly puts him at the top of the list. Lee said that people should fall in love and have a lot of babies in order to combat climate change because maybe one of those babies will grow up and find an answer to the problem. And that’s just the beginning of Lee’s idiotic rambling, as Ring of Fire’s Farron Cousins details.

You know, for years it seems like a Republicans in Washington DC if kind of been fighting among themselves to having this little competition to see who can be the dumbest or say the craziest thing on the floor of either the house or the Senate. Now we’ve had Matt Gaetz vying for the title of dumbest Republican. We’ve had Mitch McConnell. Louie Gohmert wore the crown for a couple years as the dumbest person in DC, but I think now it’s time to pass the torch because the front runner for 2019 for the dumbest Republican in Washington, d c goes to Senator Mike Lee. He is 100% leading the pack of the dumbest of the dumb, and he proved it yesterday and his little speech, well, you can’t even call it a speech. It was more of a performance on the floor of the Senate where he attacked the green new deal and did it quite possibly the dumbest way ever.

See Mike Lee had his staff make all these charts, these beautiful pictures that he brought down to the floor. You had a chart, a picture, I guess, of Aqua Man. You had one with a man I couldn’t make out if it was supposed to be a real person are just fictitious man. Uh, riding a velociraptor while holding a machine gun. Uh, you had a chart of babies and we’re going to get to that one in just a minute. You had a chart of cattle population before and after the green new deal because as Republicans like to tell us the green new deal, we’ll kill all the cows in the United States. It’s not true at all, but they think their base is dumb enough to believe it. Uh, there was a chart with Luke Skywalker riding a Tauntaun and there was of course the one of shark NATO. That is what Mike leads thinks he can use to fight back against the green new deal.

But as I mentioned, we’ve got to get back to the, the picture of the babies, the cute little baby sitting there on his chart because those babies, Mike Lee is telling us or who is really going to fix the issue of climate change. Here’s what Mike Lee had to say. So this is the real solution to climate change babies. By having more children, you’re making your nation more populous, boosting its capacity to solve climate change. So go out and have lots of babies. Hope that we haven’t destroyed education in this country enough to where they can get a decent enough education, go to college. Maybe by then we’ll have this student loan problem figured out, then send them to Grad school and then those babies, if they’re smart enough are going to solve the issue of climate change. All we got to do is rate wait 25 30 years and these babies that I’m encouraging you all to go out and have will solve the problem for us.

Well Mike Lee, that sounds like a horribly stupid plan. Not to mention the fact that we don’t have 30 to 35 years. We don’t have 25 years. We don’t even really have 20 years. Uh, we’ve got 11 we’ve got 11 till the worst effects of climate change really become irreversible. But you know, good talk. Maybe one of those babies is going to be some kind of child prodigy that’s going to graduate college at age eight. Maybe that kid would have a chance to solve the problem for us. Um, he also goes on to the say the solution to so many of our problems at all times in all places is to fall in love, get married and have some kids. Wow. If this was the mid 18 hundreds man, Mike Lee’s message would resonate with people. Unfortunately, this is just an idiot Republican who has no ideas of his own.

So he goes on the Senate floor and attacks the good ideas of other people even when his attacks fly in the face of science. Because as scientists will tell you it now, if everybody goes out there and just starts having more and more and more and more and more kids, that’s gonna eat up a lot of resources that’s going to increase admissions and that’s going to reduce the timeframe from 11 years, possibly down to nine or eight years. That’s actually very bad advice and would make the problem so much worse. And as I previously mentioned, we’re cutting education left and right. You know, we’re not doing anything to help kids be able to get into college, unless of course you’re in the top 1% and you pay to have a phony sat scores made up. But other than that, the rest of us are still struggling to figure out how to pay for it and how to get in. So yeah, I don’t think these kids really have that bright of a future under Republican rule. Mike Lee showed us just how dumb Republicans can be, but I can promise you probably within the next month, there’s going to be another republican elected official that’s going to come along and say something even dumber than what Mike Lee did yesterday.