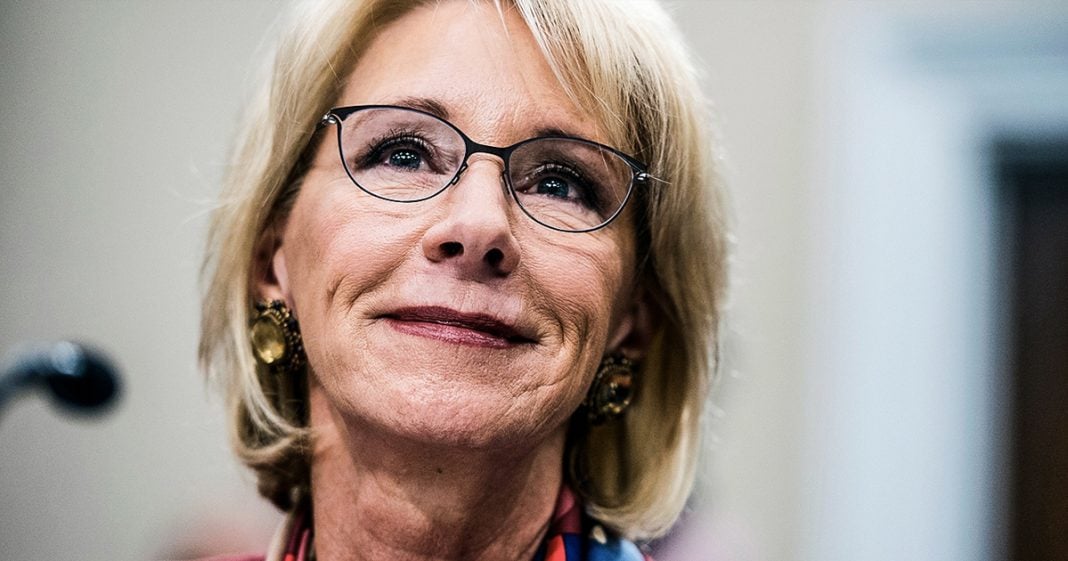 Secretary of Education Betsy DeVos appeared on Capitol Hill to defend cutting the budget for the Special Olympics, and also her department’s decision to grant $60 million to charter schools and groups that give scholarships to charter and private schools. What DeVos left out of her defense is that she is invested in these companies and will make a killing in profits off her decision. This is a new level of evil, even for the Trump administration, as Ring of Fire’s Farron Cousins explains.

I’ve mentioned several times over the last few years that the Trump administration and the Trump family have reached cartoon villain levels of evil. You know, they just seem to do these over the top things that you would really only see in a cartoon because real life people wouldn’t necessarily do that. But every time the Trump administration proves me wrong, and Betsy DeVos, the secretary of education, did just that yesterday when she had to appear before a house sub committee to explain her budget for the Department of Education and the cuts that she wants to make. One of those cuts happens to be $18 million that she wants to take away from the Special Olympics. Betsy DeVos wants to take away the federal funding for the Special Olympics. A move that disability advocates say would be devastating for that organization, but don’t worry, cause DeVos says, listen, there’s lots of, uh, uh, philanthropist all throughout the United States who also give money to the Special Olympics.

So pulling $18 million out of it really isn’t gonna be that bad. Well, it is Betsy. And yes, that move is just downright evil. And before Republicans say, well look, we’ve got to cut money somewhere. Maybe this thing that’s not vital to the United States is what should go. Okay, well to that I offer this. How about the fact that she’s actually increasing to $60 million? The amount of money that the department of Education is going to be giving to private and charter schools, and a part of that 60 million is also going to go to groups and organizations that provide scholarships to charter schools and private schools. So not only is she taking money away from people with, with disabilities and handicaps, she’s also taking money away from our regular public school system and putting it in the pockets of the wealthy people and corporations who own these charter schools.

And that actually includes herself. Betsy DeVos has major financial holdings, not just in charter schools and for profit colleges, but also in some of the organizations that give money to people to send their kids to these private schools. So literally every part of her disgusting little budget here is something that’s going to benefit her, her financial holdings, her investments, Betsy DeVos, the secretary of education is taking money away from disabled children and literally putting it in her own pocket. It doesn’t get much more evil sinister, and to be honest, quite illegal than what Betsy DeVos is doing.