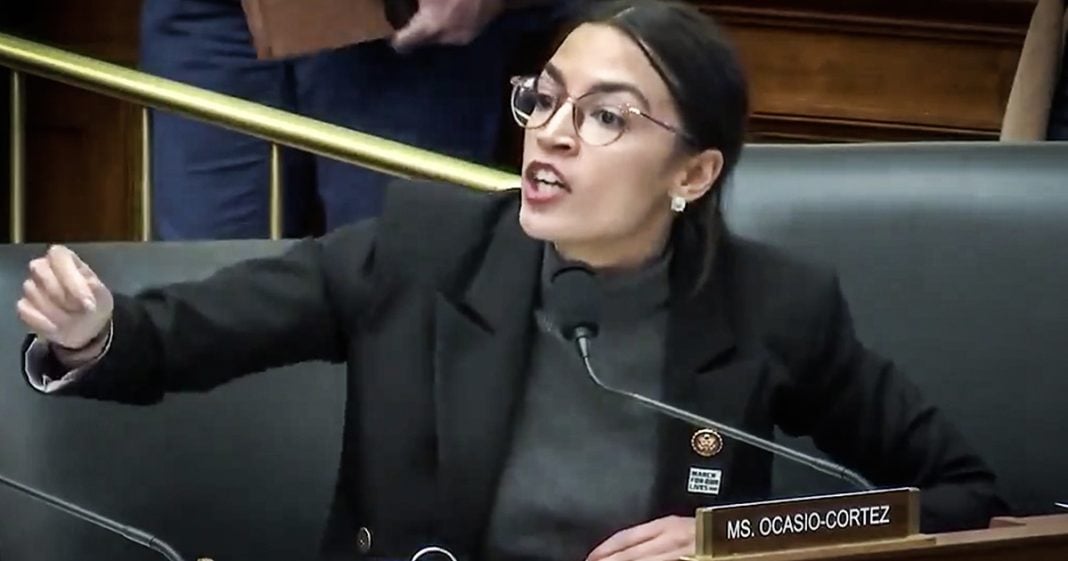 After members of the Republican Party called the Green New Deal “elitist,” Representative Alexandria Ocasio-Cortez tore into them for being callous, shallow, and hypocritical monsters. Her response was beautiful and it was the kind of response that we’ve been waiting for Democrats to deliver in the face of Republican obstruction for quite some time. Ring of Fire’s Farron Cousins discusses what happened.

The difference between Democrats and Republicans could not be more distinct at this point in American history yesterday, while Senator Mike Lee or Republican was on the floor of the Senate saying that we should just have more babies to solve climate change. Newly elected representative Alexandria Ocasio-Cortez was in the House of Representatives delivering one of the most scathing and firing rebuttals to Republicans that honest to God I have ever seen in my entire career. Take a look at this.

Beside from that, when we talk about, uh, the concern of the environment as an elitist concern, one year ago I was waitressing in a Taco shop in downtown Manhattan. I just got health insurance for the first time a month ago. This is not an elitist issue. This is a quality of life issue. You want to tell people that their concern and their desire for clean air and clean water is elitist. Tell that to the kids in the South Bronx, which are suffering from the highest rates of childhood asthma in the country. Tell that to the families and Flint whose kids have, their blood is ascending in lead levels. Their brains are damaged for the rest of their lives, called them elitist. Tell. You’re telling them that those kids are trying to get on a plane to Davos. People are dying, they are dying, and the response across the other side of the aisle is to introduce an amendment five minutes before a hearing and a markup.

This is serious. This should not be a partisan issue. This is about our constituents and all of our lives. Iowa, Nebraska, broad swaths, swats of the Midwest are drowning right now. Underwater farms, towns that will never be recovered and never come back. And we’re here. And people are more concerned about helping oil companies and helping their own families. I don’t think so. I don’t think so. This is about our lives. This is about American lives and it should not be partisan. Science should not be partisan. We are facing a national crisis and if we do not ascend to that crisis, if we do not ascend to the, to the levels in which we were threatened at the Great Depression when we were threatened in World War II, if we do not ascend to those levels, if we tell the American public that we are more willing to invest and bail out big banks than we are willing to invest in our farmers and our urban families, then I don’t know what we’re here doing. I don’t know what we’re here doing.

First and foremost, everything that AOC just said is 100% correct. The green new deal is not elitist. What is elitist is these wealthy well to do millionaire Republican sitting there in Washington DC while struggling people, people who are not economically benefited from their bloodline are being poisoned by corporations. They’re being destroyed by climate change. How has that elitist to want to take care of the least among us? I believe there’s a book that Republican’s love to talk about that actually says we’re supposed to be doing that, but not just the fact that she was right. Okay. It’s the passion. It’s the delivery. It’s the attack. That’s what’s been missing. That is what has been missing, not just from the climate change talk, but from so many talks in Washington DC. We have seen Republicans get up and give these fiery, passionate fact free speeches for a long time, and it gets their base excited even though it’s based in complete fantasy.

AOC gave them a taste of their own medicine, except she was able to do it with facts and Statistics and truth. That’s what’s been missing from the conversation, and that is why she is one of the most popular and one of the most talked about people in the House of Representatives today. That speech should just be the beginning. We need more of those. We need more people willing to come out and do that because until you fight the Republicans with the anger that they bring to you, you’re going to continue to lose. But AOC just showed us how to fight back and win.