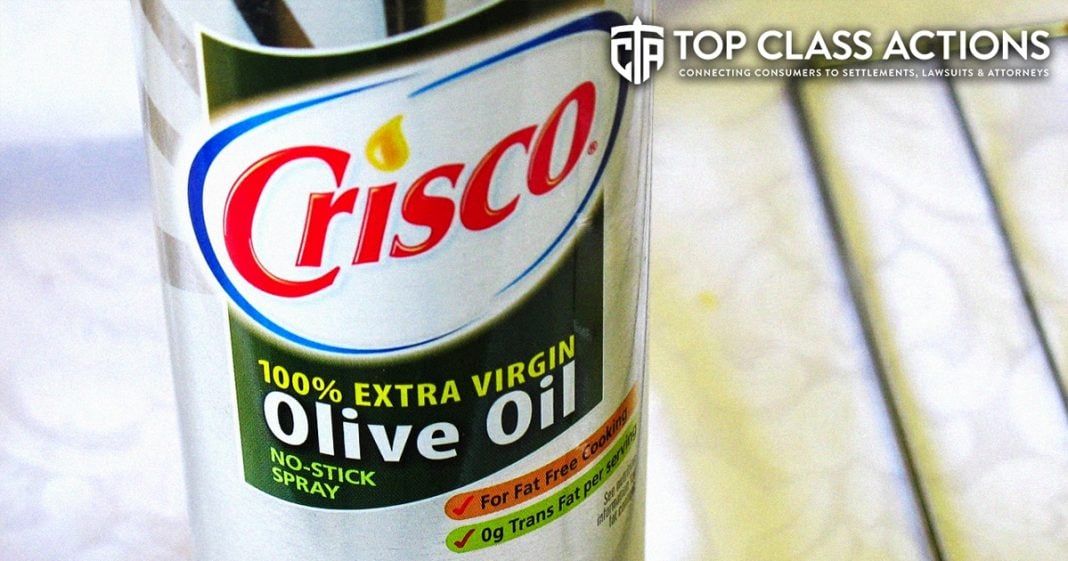 Farron Cousins:                  More and more Americans are trying to be just a little bit more health conscious and paying more attention to what they’re putting in their bodies. We’re buying better foods. We’re buying organic. We’re buying non GMO. Some of the times those labels are accurate. But while we’re so worried about the labels on the actual food, we’re not quite paying attention to the labels of what we’re using to cook with. For example, cooking spray. A lot of us take that for granted. We spray down the pan, we throw the food in and we move on.

Not thinking what’s in that spray that actually makes the food not stick to anything. And as it turns out, it’s not always what the can says it is. Joining me now to talk about this is Scott Hardy from topclassactions.com. So Scott, right now we’ve got this, Smucker’s class action related to their, their cooking sprays because they’re cooking sprays tell us, this is 100% olive oil. This is 100% canola oil, oil, but it’s not, it’s not even close to being 100% here is it?

Scott Hardy:                          It’s not. And you know, it’s funny with this class action, the plaintiffs actually included a survey because when we see these cans it says a 100% canola oil, 100% extra virgin olive oil. So you think, man, I’m great. All it should be is oil and compressed air. That should be it. But as you said in this case it’s not. You have a couple of different ingredients that include soy lecithin which is produced by degumming crude soy oil extracted from soy flakes with hexane. And of course hexane is designated as an air pollutant by the EPA. And dimethyl silicone another ingredient reportedly found in Crisco sprays is used in lubricants and hydraulic fluids.

And I don’t know if I want to be ingesting that, especially when I am being told that it is 100% extra virgin olive oil. And when I see that on the bottle, just like most consumers, I think that’s what is in there. I usually, you know, now with my job and what I do, I will take a look at the label and see the actual ingredients. But according to a survey that the plaintiffs submitted of 400 consumers that, you know, of the surveyed consumers, 64% thought that the sprays only included the oil based on the label. And I, you know, I’d be with that 64% most of the time because you see that when you say that there’s 100% of something in there, that’s what I expect.

Farron Cousins:                  Right. And that’s what gets me about this is, you know, we, we’ve discussed in the past a little bit of, you know, deceptive marketing by some of these, these food makers. But if you were to tell us 100%, why should we think anything else? You know, if you said 99% olive oil, 98%, 90% we would say, okay, there’s obviously other things in there, but if you say 100% that means every single thing in that bottle is what we’re saying on the label.

And that’s what the survey was trying to, to prove. It says most people, if you see the number 100% you’re not going to second guess it and say, well, hold up. Am I being lied to right here in the middle of the grocery store or am I going to say, oh, 100% olive oil that’s, that’s better than this one that doesn’t say 100%? So you just, you just took their choice away. They’re looking at an aisle at a display here, 100% olive oil versus olive oil cooking spray.

You’re going for the 100% you’re gonna pay 20, 30 cents more per can but you think that you’re getting a can that’s not going to contain, as the EPA or the Department of Agriculture calls it, or EPA, excuse me, air pollution, which is what is in some of these bottles because of the chemicals. This is nuts to me. I mean 100% you can’t even be honest about that. That’s how bad these, these companies get with their advertising sometimes.

I don’t know. I’d love to know. Is it simply compressed air? Just put it on the dog on label and tell us what we can expect here and give us what or like you promised, give us 100% cooking oil. Not 99% or 98% or 95% cooking oil along with some industrial lubricants to make, making your sure your food is extra tasty.

Farron Cousins:                  And that’s the point here is that if you’re going to put something else in the food product, let us know so that we can make that informed choice as American consumers. Or if you’re worried about these cooking sprays, I know anything in an aerosol can obviously is not going to be 100% of any single thing. You could go the easy route. What we do at our house, we actually, I have a little mason jar I keep next to the stove. It is filled with vegetable oil. I have a very small paintbrush actually, before the pan gets hot, brush a little on there. Don’t use any cooking spray.

It’s actually little bit better for your pots and pans as well. It doesn’t leave that residue. So there is a helpful hint if you want to avoid some of this, but if you have been affected by this, if you’ve purchased this product, go follow the link in the description of this video. Head on over the topclassactions.com all the information you need is right there, Scott Hardy, Top Class Actions. Thank you very much for telling us this story today.