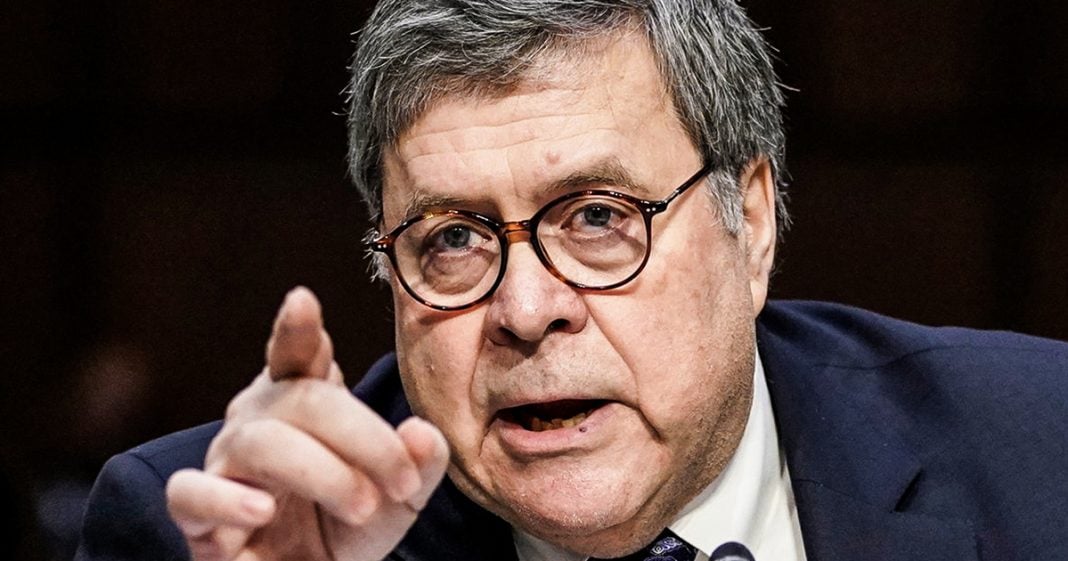 One of the more concerning parts of Attorney General William Barr’s summary of the Mueller Report is that Mueller left it up to the DOJ to decide whether or not to prosecute the President for obstruction of justice, and Trump’s new AG immediately said “no thanks.” The evidence of this crime has been right in front of our faces for a very long time, but the politicized DOJ wouldn’t allow any action on it. Ring of Fire’s Farron Cousins discusses this.

So while everyone in the Trump administration right now is taking their victory lap, patting themselves on the back, telling us that, hey, Democrats wasted 22 months of your time on this phony investigation that resulted had no charges against me or my kids. Uh, here’s the thing though, it actually should have, and I’m not talking about collusion, is I’ve been saying for the longest time that would be damn near impossible to prove there was still a possibility you could have. But it’s so hard to actually prove that, that there was almost no chance whatsoever they ever would have. So the no collusion finding is not surprising to me at all. What is surprising is the fact that there’s no obstruction of justice. That’s what should have happened if we got any charges out of this particular investigation, if they weren’t looking at Trump’s money than obstruction of justice would have been number one on that list.

And in fact, Robert Mueller said, hey, I, when he submitted his report, so I don’t want to draw the lines here. So if you William Barr and Rod Rosenstein feel like there is enough evidence here to go forward with obstruction of justice charges be my guest, you’re good to go. Here’s my report, I’m out. And then William Barrr did exactly what Donald Trump hired William Barr to do. He didn’t go for charges on obstruction of justice. That is exactly why William Barr is our attorney general today because Trump knew that if it came down to a Barr, if Mueller put the ball in Barr’s court, he knew exactly what would happen and that’s exactly what did happen. And that’s exactly what all of us predicted would happen. Barr did nothing. In fact, what Barr did is actually, you know, borderline illegal malpractice because he said in his justification for not bringing charges on obstruction of justice, he said it’s not that it wasn’t there, but since Donald Trump wasn’t charged with a crime, since they couldn’t find collusion, which was the big crime, then how can you obstruct justice if there’s no crime?

Right? I mean on its face, honestly, the kind of seems, if you know nothing about anything in the world, it seems like that’s a good argument. Like, Hey, well, yeah, I mean, if I didn’t do anything, how can I obstruct something? And the answer is very simple. Obstruction of justice does not depend on whether or not a crime has been committed. So William Barr, the attorney general of the United States, his own legal reasoning was flawed and incorrect. Yes, you can have obstruction of justice when you don’t have an initial charge. If you impede a federal investigation in any way, that’s obstruction of justice, even if you’re not being the one who’s being investigated. I could walk in, you know, stumble upon an investigation and intentionally obstructed if I knew what was happening, even if I wasn’t a part of the investigation, I wasn’t a target. I wasn’t even somebody mentioned in it, I would still be capable of obstructing justice in that particular investigation.

Just as Donald Trump was, most of the evidence of obstruction of justice, uh, was presented to the public. You know the, the firing of Comey, the tweets, the witness intimidation, we knew all of that, but apparently in the report there’s a few other instances. So there’s actually a couple of things we didn’t know about and won’t know what they were unless the full and final report is released. But based on the things that we did see, the things we do know, there was plenty of evidence to move forward with obstruction of justice even if you can’t charge him with collusion. And the biggest problem is that at this point there may not be a lot that can be done about it. I don’t think the Democrats in the House of Representatives, nor do I think they should pursue impeachment charges on obstruction of justice based on the attorney general saying we’re not going to do it because first and foremost you’re not going to get Republicans to go along with it so you’re not going to remove him from office and then you’re just going to give him even more fodder for running in 2020 so unfortunately Barrs decision as pretty much put an end to that.

There is not much we can do. Same thing with the uh, Mueller reports, big conclusion that we do know that there was no collusion. That’s done. It’s over. Pick yourself up, dust yourself off and move on. That’s really all we can do. We need to see the final report. I do pray that it gets released for the sake of this country, but even if it doesn’t, there’s nothing we can do. And I’m not saying that to make people feel hopeless. I’m saying that to say, let’s move on. Let’s go talk about things that matter. If you want to talk about investigations that have the possibility of taking Donald Trump down, go look at what’s happening in New York, which we have always said with a much bigger investigations, the much easier investigations and it’s state crime, so he couldn’t even be pardoned if he does get convicted.

So don’t lose hope if your entire identity is, is on whether or not Donald Trump is going to be charged with crimes, you still got what’s happening in New York. But if you would rather focus on issues and talk about policies and talk about how Donald Trump has poisoning American democracy, that might be an even better route. Let the investigations do with these investigations are going to do, do not hang your hopes of removing Trump from office on any of these investigations, no matter how much of a slam dunk they may look instead, do what the Democratic candidates are doing right now and focus on beating him at the ballot box in November of 2020 that is the only sure fire way to really get this man out of office.