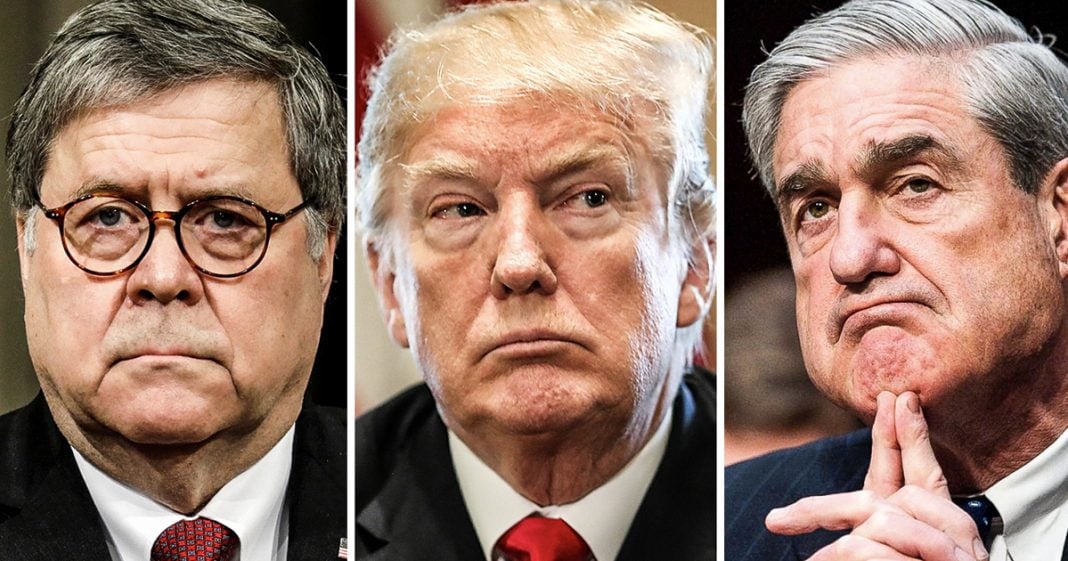 Attorney General William Barr has the final copy of the Mueller Report, but so far no one outside of Trump’s inner circle has been allowed to see it. Other than a short, 4-page snippet from Barr, we don’t know exactly what’s in there, but that hasn’t stopped the victory laps, the cries of conspiracy, and the back-patters to declare that they were right all along. Ring of Fire’s Farron Cousins explains what we know, and more importantly, what we don’t know about the Mueller Report.

So I’m not sure if anybody actually is aware of this, but on Friday evening, Robert Mueller actually submitted his final report to Attorney General William Barr. I’m being sarcastic of course, because everybody knows that this happened and apparently also everybody knows what’s in that report in spite of not having seen it yet. Now we did on Sunday get a four page CliffsNotes version summary from Attorney General William bar where he said, hey, Donald Trump did not collude with Russia. That is what the Mueller investigation found. Also a, they weren’t sure if he obstructed justice. We’re going to go ahead and pump that and a do nothing about it. But nonetheless, we know for a fact William Barr, the attorney general has seen the report. There’s probably a few other people in the Department of Justice who have seen the report. We know Robert Mueller has seen the report as well as obviously members of his team.

But beyond that, that’s probably it. And yet in spite of that all over Twitter, conservatives, liberals, everybody was telling us something different about a report they haven’t even seen. So let’s start with what we do know from bars letter. First and foremost, he quoted Robert Mueller where he specifically said this, a report does not implicate Donald Trump and a crime, but it also does not exonerate him. Now, in spite of containing that phrase does not exonerate him. The word exonerate is exactly what Donald Trump used to describe the report. It exonerates me. Fox News is saying it exonerates him. Trump’s followers are saying it exonerates him when it literally says the opposite. It says it does not exonerate him. That’s one thing we do know. We do know that Robert Mueller says we couldn’t put the pieces together for collusion. There’s not enough evidence to say that yes, the Trump campaign worked with the Russian government to influence the outcome of the 2016 presidential election, at least according to bars summary, so we can go ahead and put that in though we know it column, we know Robert Mueller is not going to be issuing any further indictments.

We knew that Friday night there are no more sealed indictments. Indictment time is done, so we put that in the, we know it column. Now let’s move over here to the, we don’t know at column cause there’s a lot over here and in spite of the, the number of things that we have over here and though we do not know this yet, I have seen far too many as I’m sure anybody who’s been on social media far too many people say that, nope, I told you I was right all along. I knew this wasn’t going to happen. Then you have other people saying, no, this is a big conspiracy, raw William Mars covering it all up. We don’t know the truth. He obviously didn’t collude. Everything’s awful. There’s some kind of thing happening and we’re going to subpoena, we’re going to get the documents, we’re going to have big hearings about it and we’re going to continue to draw out this drama for another two years if we have to.

Here’s the thing, I can’t really put anything in the, we don’t know column at the moment because we don’t know it. Look, poll show a majority of people left, right and center. Everybody. I think over 80% at this point, last number was 86% once this report released, they want to know what’s in it and at this point, if indeed it does say that Trump didn’t collude, there’s nothing in there. They couldn’t find it. The obstruction of justice was weak. Let us see it. Let us know what else happened. Now, William Barr has said he’s going to work with Robert Mueller. They’re going to go through, they’re going to find bits and pieces that they can release, but that’s garbage. We need the whole thing. Everybody in this country should be able to go download or go to a website that has it posted or even buy a physical copy of the Mueller report and read it for themselves because until that happens, we’re going to be left with just a bunch of speculation from people who do not know what’s in the report and after just a mere 48 hours of this, it’s already exhausting.

It’s tiring. Yes. Plenty of folks out there said, you’re not going to be able to prove collusion. We said that, but we’re not going to go around gloating about it online for the next two years. We’re moving on the obstruction of justice thing. Yeah, that seemed like a no brainer. Shocked that that didn’t happen. Nonetheless. Not much we can do about that at this point, so we have to move on. We can demand the full copy be released, but at this point we have to understand it’s not going to be the be all cure all to get rid of Donald Trump. In fact, it’s probably not even going to come anywhere close to being able to be used to remove Donald Trump. The Mueller report is done. It didn’t turn out the way a lot of us thought it would. It didn’t certainly didn’t turn out the way MSNBC, it told us it would, did not have the desired outcome.

A lot of people along the way, and I’ll be honest, I’m in that group. We got sucked into the hype every now and then thought, oh, this is it. He’s not coming back from this. And then you know, few weeks later we come back and say, listen, we were wrong about this. It’s not looking so, so bad for him anymore. Oh now today it’s looking worse. There were ups and downs. It was a roller coaster, but those of us who were willing to admit that we were riding the roller coaster that we didn’t think it was going to amount to very much. Great. A lot of outlets got it completely wrong from the start and I don’t want to pile on MSNBC cause everybody on is already doing that, but they basically built this into their brand for the last two years and now they’ve got nothing and yes I’m sure for the next few days are going to be talking about this as a coverup.

William bars trying to keep stuff from us and yes, I believe William bars trying to keep stuff from us and that is why all we can do is demand that the full report be released. Maybe it’ll happen this week, maybe it’ll happen next week, maybe two, three months from now when everybody’s forgotten about it. Maybe it won’t happen till the next president takes office in, finally decides I’m going to release this to the public so they know what happened back then. We don’t know. So I guess that’s the one thing we can put in the, we don’t know column and that is when or if the full report will ever be released. But until then, if somebody tells you that this report does do x, Y, or Z, take it with a grain of salt. Because unless they work at the DOJ, they haven’t actually read it yet.