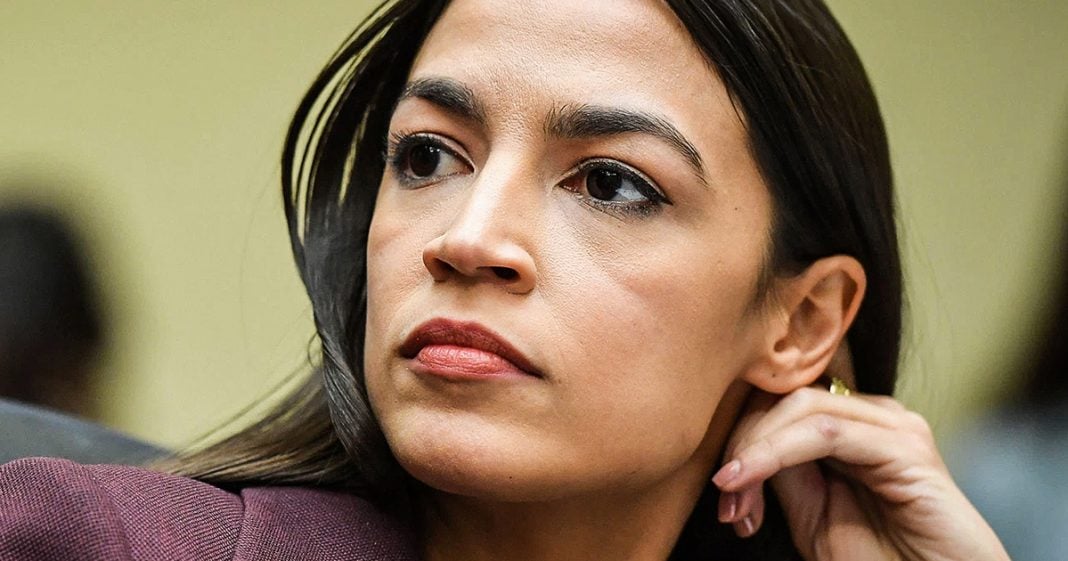 Alexandria Ocasio-Cortez once again nailed the problem with the Republican Party, and it isn’t Donald Trump. Trump is merely a symptom of a larger disease, and that disease has spread through every part of the Republican Party. As AOC put it, whether he stays or he gets impeached, that doesn’t do anything to tackle the real problems that we’re facing. Ring of Fire’s Farron Cousins discusses this.

Okay. And that’s what she was trying to warn us about. Here’s what happened. Um, on Sunday, a actor George Takei tweeted out the following, he said, let’s say Trump goes down in disgrace from Mueller or the SD and why, or congressional investigations. We’re left with a big question. How did a guy like that get elected? Why do many still support him? We can’t just say Fox News or Russians. We have serious issues to shore a, to sort out. And that was a George Takei tweeted that out to which AOC responded with this very long Twitter thread explaining why y two K is right by telling us that yes, Trump is just the symptom, the disease itself, that that presented this symptom that lives within the Republican Party’s infrastructure.

Okay? Using that word, it’s something we hadn’t done yet and I’m very mad that we haven’t because that’s where it is. That’s where the disease is. The disease is in the infrastructure. She, she tells us, she says he can stay, he can go. He can be impeached or voted out in 2020 but removing Trump will not remove the infrastructure of an entire party that embraced him. The dark money that funded him, the online radicalization that drum does, army or the racism he amplified and reanimated. In order for us to heal as a nation, we all must pursue the hard work of addressing these root causes. It’s not as easy as voting. It means having uncomfortable moments and combos with loved ones, with media, with those we disagree and yes, within our own party too. It’s on all of us. Those are powerful words and even more powerful considering the fact that this is a woman who Fox News and right wing media repeatedly attack, repeatedly attacked to the point that now her staff has to go through specialized training because she gets so many threats. But this woman is a hell of a lot smarter, okay.

Than anyone on the right is giving her credit for. In fact, that a lot of those on the left are giving her credit for because Trump is simply a symptom. The disease, the disease itself, a cancer that has grown within the Republican party has reached into Fox News. It’s reached into the alternative media on the right. It’s reached into the dark money groups. It’s reached into the court system. It’s reached into Congress and the Senate and the White House. It’s all of it. And the biggest problem, at least in my opinion, is the money factor. When you take a look at some of these folks out there today, you got your Ben Shapiro’s, you’re Charlie Kirk’s here, Candace, so and your fly by night or superstar conservatives that make a big splash and then a couple of years later you forget they ever existed. These people are funded by Republican groups. They like to say they’re grass roots, but all it takes is about five seconds online to find out that, oh no, you solicited money and got money from coke foundations.

You got money from the Mercers, you got money from all these other right wing foundations and think tanks who also get a bunch of money from each other. There’s a lot of money going back and forth. It, it feels like a very convoluted money laundering scheme, but at the end of the day it always ends up in these little, no nothing. Idiots like your, your Kirk’s and your Shapiro’s in your a Owens. They get paid big bucks and they go out there and they spread the lies. It’s this little army of liars that right wingers have created. So when you have your average voter who would look at Donald Trump and say something not right with this guy. I don’t like that access Hollywood tape that that’s very creepy and very rapey. That’s when you send that to your, your little troll army. And they go out there and they say, yeah, but man liberals, they want to kill babies after they were born.

It’s not true. But they’re saying those things, liberals, they want to, you know, uh, let all the illegals come in and kill you and take your jobs after they kill you. Maybe take your job then kill you. We don’t know the order, but that is 100% what they want to do. That’s what these little troll armies go out there and tell people. That’s how you take a normal person who would typically look at Trump and say there’s something wrong with him and radicalize them. And they say, well, I, I certainly don’t want to be murdered by an illegal immigrant. So I, I guess I’ll vote for the guy who wants to grab me by my genitals. I guess that’s a better choice. It’s things like that. That’s the kind of thing that AOC and so many others have been talking about for a long time. You’ve got to address the entire infrastructure of the Republican Party. If you want to understand why a guy like Trump is sitting in the White House today.