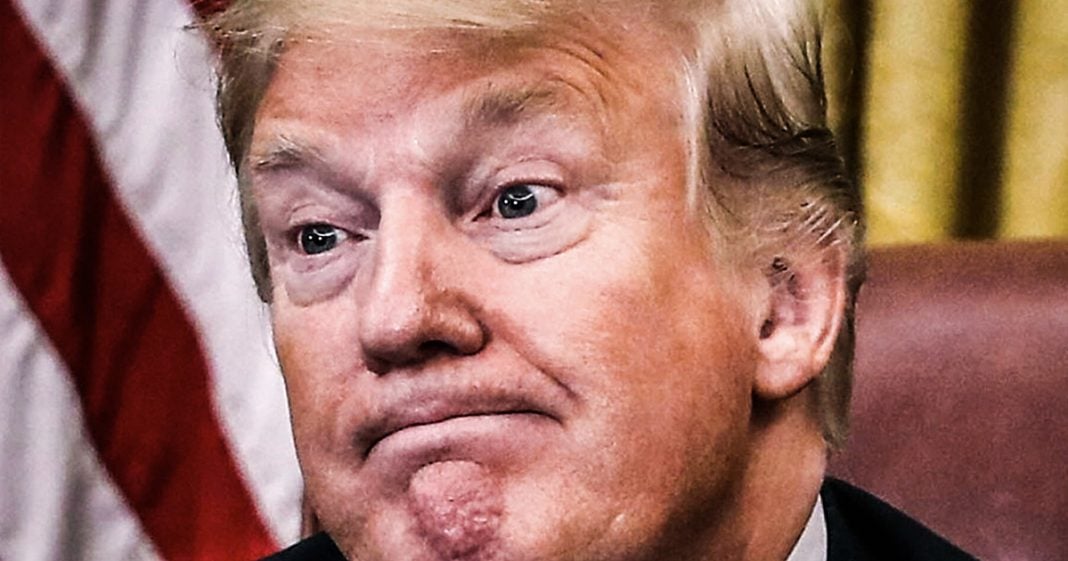 Donald Trump’s own cabinet – the cabinet that he picked out himself – admitted this week that the tax cut package that Trump and the Republican Party pushed on this country have not delivered the economic growth that they had promised. In short, the tax cuts were a complete failure and everyone who looked at this objectively predicted this would happen. Ring of Fire’s Farron Cousins discusses this.

You know, something interesting happened earlier this week that I feel did not get the attention that it deserved, and that is that you had Donald Trump’s own economic advisors. In fact, his White House Council of economic advisers come out publicly and admit that the Republican tax cut package, that one and a half trillion dollar tax cut was actually an absolute and complete failure and didn’t do a single thing that they told us it was going to do. That includes Trump’s handpicked Federal Reserve chairman and the White House economic advisors. Here’s what they had said. Um, according to raw store here, you know, they, they told us back in 2017 they released a report saying that if we reduce corporate taxes by 15%, the GDP is going to grow to three to 5% huge growth in GDP. Everything’s going to be boom in the, in the economy, everybody’s getting more money. All we gotta do is make these tax cuts of reality and Bam, that’s going to happen.

Now, at the time, obviously all of us who aren’t partisan hack Republicans said, that’s not true. History shows. That’s not true. The guy who invented trick trickle down economics already told us years ago, this isn’t even possible. Through my plan, I was wrong and I was stupid. So we, we reminded everybody of that and we said they’re lying to us. Just wait and see. Well now they’ve admitted you. Wow. We were way off. So they revise their numbers down. We’re not going to get between three and 5% GDP growth. Last year they were telling us probably in about 3% it’s still good. It’s still chugging along, just not quite as fast. Everybody gets a little bit more money, not a ton as much as we had thought. And then this week they came out with another report and said, wow, we were way off. We’re not going to hit three.

Uh, we might might hit 2% GDP growth. Uh, right now it’s, it’s in the one in the ones, 1.9% close to too, but not quite to certainly not up to three and damn sure. Nowhere near 5% GDP growth. And here’s the thing, actually economists have now come out and said you’re 2% projection now is actually way too optimistic. We’re going to be lucky to stay in the ones because of your tax cut and you’re horrendous policies. But Hey, at least this council of economic advisers is willing to come out and say we were wrong. There’s still overly optimistic and using faulty math and bad numbers, but at least they admitted they didn’t get it right. If only more of them had listened to quite literally everyone else who told them back in 2017 that your not telling the truth and I’m not just talking about those are the media.

I’m talking about the actual economists, the people who look at this and do this for a living who went to school for this who have degrees in this, all of them, all of them were, were were warning the Republicans that this doesn’t work. Trickle Down Economics is a myth. If you cut taxes for the wealthy but not for the middle class, everybody is going to end up getting screwed and you’re going to slow growth in this country. And guess what happened? They pass the tax cuts. Middleclass got screwed and growth in this country is slowing down at a rapid pace. And the same economists who actually predicted this would be the case, are now telling us it’s going to slow down even more. Trump’s council of economic advisers still a little optimistic and probably wrongly so considering the fact that they have literally been wrong about every single thing they’ve told us since Donald Trump put them in power.