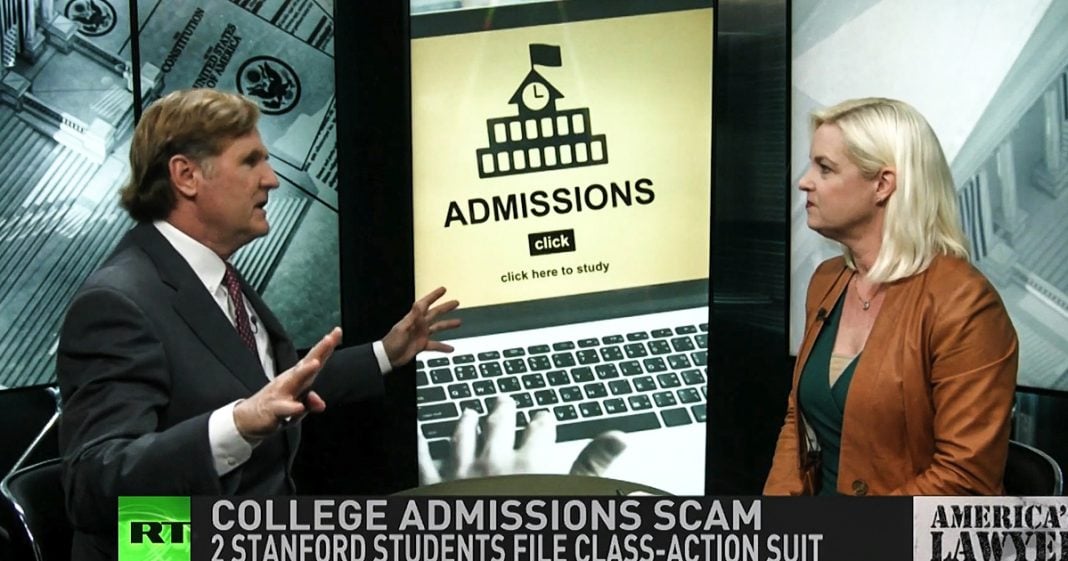 Mike Papantonio:             Two Stanford University students are suing the university, Southern California, Yale, and other institutions in a class action lawsuit over the massive cheating admissions case. Mollye Barrows, legal journalist for the trial lawyer magazine is here to talk about this. Mollye, you may see this differently, but we got calls early on about is this a class action? And I said, it’s, it’s very weak. This, this case is DOA.

Mollye Barrows:                Right. And that’s going to be interesting to see these two students are trying to pull something that maybe is potentially an opportunity, but I think other legal instructors are feeling like you do that basically this case isn’t probably going to get very far.

Mike Papantonio:             Yeah, I know the lawyers that brought it, they’re, they’re capable lawyers, but they’re maybe seeing something that’s, here’s what you have to articulate. You have to say that yes, there was some wrong conduct that took place. No question about that. But then you have to tie it up. It’s called causation. You’d have to, you have to tie up the bad conduct to an event that affected a class of people.

And here you’re saying that this bad conduct actually resulted in people not getting into law school. Well, the answers are obvious, aren’t they? I mean, the university says no, it wasn’t because of that. It was because you made the top, the bottom, you know, 30% on the ACT or whatever it may have been.

Mike Papantonio:             Or you had no, you had there, there was no, no civil, you know, one thing they look for now what are you doing for the community? No community kind of hours. There’s all of these variables that are there that for to be able to class that is such a long shot, but give me your best.

Mollye Barrows:                It is interesting. Well, I don’t want to be the one making their case. I’ll tell you what they say about their case. So these two students, Eric Olson, Kayla Woods, Woods filing said she had applied to the University of southern California, was denied despite great scores, standardized test scores, as well as being a talented athlete. Same with Eric Olson. She had also applied to Yale and they had turned her down and she said, I paid this $85 application fee.

I would never, both of them said we wouldn’t have paid these fees are gone through the process had we known that the whole system was rigged and that bribes were involved and so there are some, and then they’re also saying that, hey, we are both Stanford University graduates now. Our degrees or less valued because this is one of the schools that’s been tied up in this federal complaint. And perhaps now I’m potential employer could look at us as having got in the school based, perhaps being bribed. They bribed their way in as opposed to getting it on their own merits. So this is their argument.

Mike Papantonio:             That probably is the best argument. But you’re going to have to bring in expert after expert to say that this is, that in the market place, that this had such an impact. That is a tangible impact. We can see the numbers. There’s something you can touch and feel.

Mike Papantonio:             And yes, it’s real. And, and since you’re a Stanford graduate, the, the, the business community looks at you like you, you simply don’t have the kind of qualifications where you ought to be working in their business. It’s, it’s a tough tough shot.

Mollye Barrows:                It’s going to be tough to prove. Maybe the application fees and maybe, but you know, they were saying that there are a lot of people that also don’t get in necessarily on their own merit. That’s assuming that every student gets in on a merit based system. And this one particular instructor was saying, a lot of these students get into these schools based on maybe their parents made a donation or there’s a legacy of some sort with a family. So that exceptions are, are, are already made that are acceptable.

Mike Papantonio:             Legacies are as common as they can be. You know, third generation goes to a particular school. The, the parents say, look, give my, give my child a shot.

Mike Papantonio:             And I’ll take, I’ll help you with a program. You know, it may be whatever the program might be a, that happens all the time. That’s not illegal. That’s a university that says, well, we want to protect our legacy. This person may be a potential donor to the university. That’s how we stay alive. There’s no, you know, that’s different. This, this was so specific that, you know, this was like taking test scores and phonying them up basically.

Mollye Barrows:                It is a long shot. I agree. And they’re, of course, they’re looking for anyone that applied to these schools between 2012-2018 see if anybody else had similar experiences. And one instructor said, you know, it’s one thing if you’re an athlete with great scores and you didn’t get in. And the person who got in was somebody who was not as good of an athlete on an athletic scholarship, but they had great scores. So then there might be some wiggle room, but that’s not necessarily what they’re saying. And that, it was a small number of people that were like only 750 over this 10 year span.

Mike Papantonio:             That’s part of the problem and then even, even that analysis is subjective. You can’t take that and make it into an objective analysis that you can present by way. I guess you could, you could find an expert to present some kind of scale that he’s looked at this from, from its impact. And here are tangible numbers that they can give you, but it’s, it’s very forced.

Mollye Barrows:                Yes. You’re right. And I think the one thing that they were hoping for that might be interesting that comes out of this is learning about the admissions process with a lot of these universities.

Mike Papantonio:             Yeah, well they certainly can learn a lot about that. Thank you for joining me.