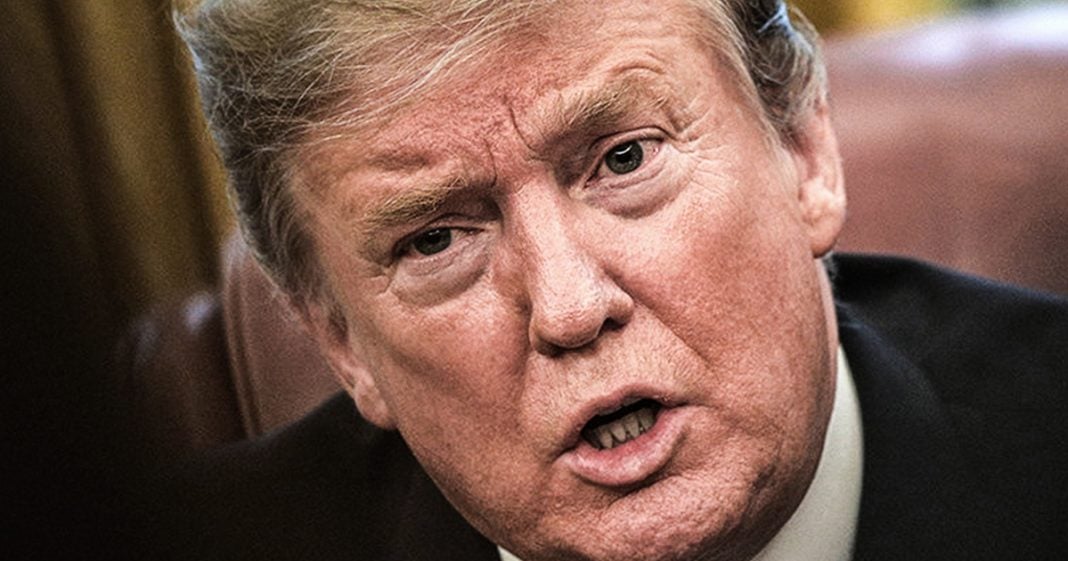 States across the country are trying to pass legislation that would prevent Donald Trump from appearing on the 2020 election ballots if he doesn’t release his taxes. All he has to do is release those documents and he’s home free, otherwise he could lose out on vital electoral votes. These laws, if passed, could likely be struck down by the courts, but it does send a clear message to Trump that those tax returns will eventually become public, one way or another. Ring of Fire’s Farron Cousins discusses this.

Polls have consistently showed that a majority of American voters say that Donald Trump should release his tax returns now when he was running for president, and pretty much ever since then, he said that I can’t release any of my tax information isn’t being audited right now. And it’s apparently an audit that I guess has been going on for three, four, five years at this point. And actually even being under audit wouldn’t even prevent you from releasing your taxes. So not only is he lying about it, but he’s technically lying twice about it because he could absolutely release those taxes at any point in time. And the American public says, we think you should, but at this point he may not really be given a choice. We know for a fact that Democrats in the House of Representatives are working to get their hands on Donald Trump’s tax returns, and that is a good thing.

But we also have 18 different states right now who have proposed legislation that would keep Donald Trump or any presidential or vice presidential candidate off the ballot in 2020 if they don’t release their taxes, what they’re trying to do, what they’re hoping to do. One, obviously get Trump to release his taxes, but by doing that, they want to restore transparency. Get us back to the time were presidential candidates did release their financial information so we could make sure there wasn’t any dirty dealing any questionable finances or anything that might raise some red flags with American voters. And again, it’s not just about Trump. This wouldn’t only apply to him, it would apply to anybody. Bernie Sanders got dinged hard for not releasing, you know, all of his taxes and all of his financial information. He needs to, I believe firmly that he should. I also believe firmly, you’re not gonna find anything juicy in there, but in an era of needed transparency, yes, Bernie’s got to do that.

And if he doesn’t, it’s only going to raise a lot more questions just as it has for Donald Trump. But Trump, unlike Bernie, has a different reason for withholding his taxes. As we know, there have been multiple different investigative bodies that have subpoenaed the IRS for Donald Trump tax information. They’re looking for financial fraud. How we found out earlier this week that Donald Trump lied to Deutsche bank in order to get billions of dollars in loans inflated his net worth. That is bank fraud, that that’s pretty much been confirmed at this point. We know that that happened and that’s probably one of the reasons why he doesn’t want to release his tax returns because that could mean any bank he did business with might be able to come forward and say, hey, we got more bank fraud over here from the Trump family. Trump is hiding something because there’s something to hide and these 18 states that are trying to pass legislation that would keep him off the ballot, obviously that likely would be enough to prevent him from being able to reach the number of electoral votes needed to win.

That’s a good start. Now these laws, if any of them even get past, uh, they’re not going to hold up in court. Unfortunately, it’s just not going to happen, but the Democrats in the house, on the other hand, they absolutely have the power to get their hands on those documents and then could easily released them to the public, or if they don’t want to go that route, if they want to have a little bit of privacy for the president, they can just give them to the body’s investigating Donald Trump and let them take it from there. I’m honestly fine either way, as long as we make sure and verify that there’s no criminal activity hiding and Donald Trump’s tax returns, but given the guy’s history, pretty obvious, there’s probably some criminal activity hiding in there.