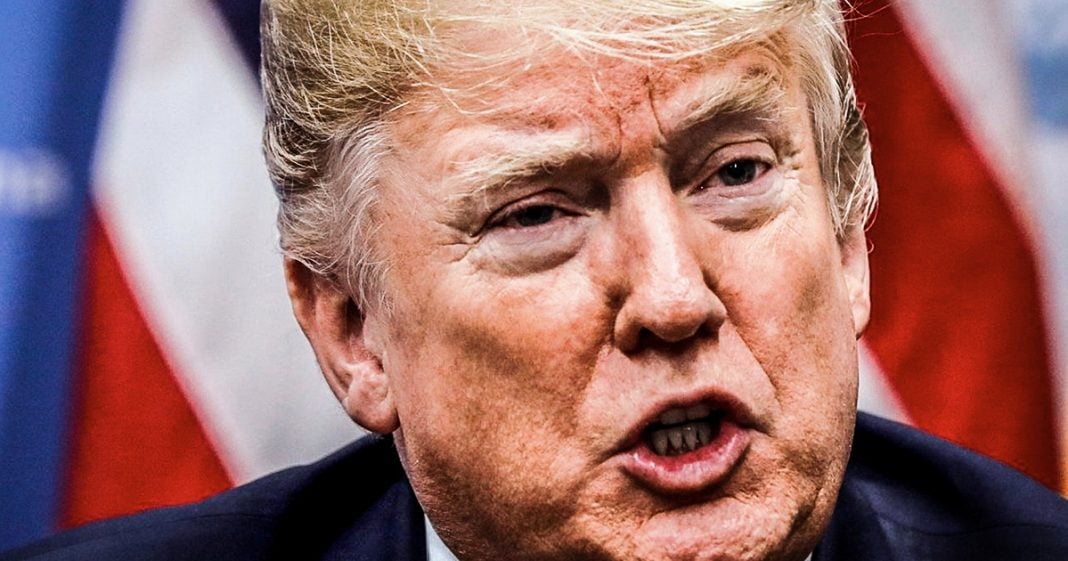 According to new reports, swing voters in pivotal states like Wisconsin are beginning to turn on Donald Trump after finally coming to the realization that the man is a con artist and that he lies about everything. This doesn’t automatically mean that Democrats are going to win in the Midwest, but it does offer a window for Democrats to make some serious progress. Ring of Fire’s Farron Cousins explains how Democrats can get these swing voters over to their side, but it won’t be easy.

According to a recent report by Axios who actually conducted a focus group of swing voters out there in the state of Wisconsin. More and more former Trump voters are starting to sour on the president. And the reason they’re souring on Donald Trump is because they now understand that yeah, the man is a con man. The man is a liar, and he only cares about himself. Here’s a few choice quotes from some of the people who were present in those focus groups. Here’s what I think. He’s a dirty crook that lies, cheats and steals when he can. There’s just a plethora of things that are still coming out. Uh, this woman, uh, this came from a man who voted for Donald Trump in 2016 who had previously voted for Obama in 2012. It was one of those about Obama to Trump voters. Uh, here’s one from Adam Kay, a 47 year old, also Obama to Trump voter in Wisconsin.

He’s been caught in a lot of lies. You know, just admit that you made a mistake and say, I’m sorry, I shouldn’t have said that. Uh, another woman, Amanda S, another Obama to Trump supporter, said he’s getting stuff done. Buddy lies. I don’t think he’s a very good person, buddies getting stuff done. So it’s hard. We’re going to come back to that because that’s an important statement there. Another one from Lisa White, uh, she was a Romney than Hillary voter had this to say, oh, he’s done a lot for jobs in the economy, but I’m all about the way people treat people and if you’re going to be a jerk then you kind of don’t need to be the face of America. Interesting enough, wasn’t a Trump voter to begin with. So I doubt a Lisa White here is going to go back and vote for Trump again because she never did.

But I want to go back to the previous statement. I don’t think he’s a very good person, but he’s getting stuff done so it’s hard. So it’s hard. It’s hard to say. I want you out of office. Is, is essentially what this woman in the focus group is telling us. It’s hard. And that right there, that is the problem that Democrats are going to run into in 2020 because look, we all know the truth Trumps not doing anything right. He’s not doing anything that’s actually helping the economy. When we see these positive numbers, it’s because with wage growth, you also have to factor in the people who make $1 billion a year, so it skews the number upward. If it was just average Americans, it would be in the negative percentages, but it’s not. So they throw out these high positive numbers. People Think, oh well things are good.

They’re not. Donald Trump has tanked that stock market on multiple occasions with a single tweet. Folks that’s not doing well for the economy. He sending farmers into bankruptcy at record numbers because of his trade wars. That’s not good economic policy. He’s not getting stuff done, and that is the message that the Democrats have to convey to the swing voters in Wisconsin at all over the Midwest, all over the areas. Basically that Hillary Clinton ignored. Let’s be honest, that’s what happened. She ignored them. Trump didn’t. He wins because of the Electoral College. He won those states by smaller margins. True, but one visit from her. Hell two visits. We’d be looking at a different country today. I would be doing a different video right now. I wouldn’t be talking about this. We would all laugh at the time that Donald Trump ran for president and failed miserably, but we’re not. Democrats need to take this story from axios and use it as the roadmap. First and foremost. You don’t go out there and you say, Trump’s a pretty crappy guy, right? Look at all of this horrible things he says, not going to cut it. Don’t even bother going there. Instead, when people say, but he’s gotten stuff done, engage them in a conversation, a friendly conversation and say, well, give me an example

cause I guarantee you that’s the end of it. Give me an example and then if they are able to give you an example counter with the points I’ve already brought up, especially if it’s about the economy. There are so many negative things about our economy to talk about right now that are directly the result of his policies that it’s not easy, not difficult. Excuse me to convince people that, yeah, he isn’t that great, especially if it is one of those actual swing voters and then you hit him with a number three and that is policy. What are you going to do? How are you going to make their lives better?

That’s it. It’s a simple formula, but it’s one that really astoundingly is actually absent from several of the people running for president under the democratic banner right now. They don’t have plans. They don’t have policies. They’re out there standing on countertops like Beto or work telling us everybody get along, dammit, we’re going to be nice to each other. We’re going to be nice with these people who are out there, you know, killing other people because of the way they dress or their sexual orientation or their race or their religion or their immigration status as be nice to them. This is brilliant plan, by the way. Everybody wants to be nice, but that’s not the message we need right now. It’s great that you can jump up and stand on a countertop, but could you tell me what you stand for? What are your policies? Because those people in Middle America, and it’s not just Beto, there’s plenty of them, but those people in Middle America, they want to know what you’re going to do. They don’t want a flashy, snazzy speech telling them that we’re going to heal this gap. Or the Donald Trump is a mean guy, said, don’t vote for him. They want to know what you personally in specifically are going to do to make their lives better. And if you don’t have an answer to that question, get the hell out of the race right now. Okay.