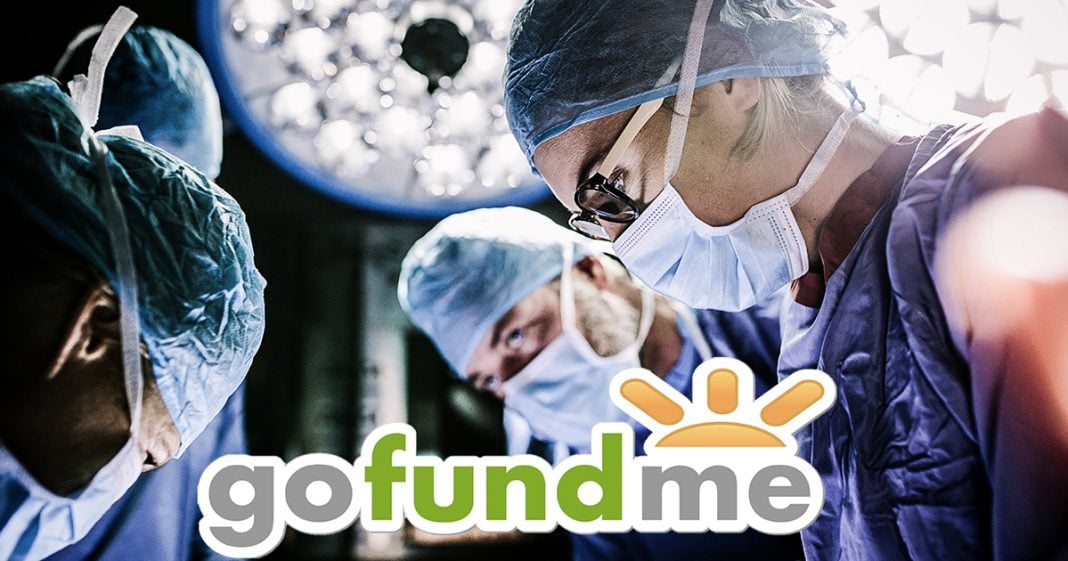 More and more people are turning to crowd-funding sites like GoFundMe to help raise money to pay off their medical bills, and the CEO of GoFundMe says that the number of people they see turning to their company for help just shows how messed up our healthcare system really is. This is an accurate assessment and we should be embarrassed as a country that we have such horrible healthcare that we have to beg people for money to pay off our bills. Ring of Fire’s Farron Cousins discusses this.

Recently, Rob Solomon, the CEO of GoFund Me sat down with Kaiser Health News for an interview. They wanted to talk about his company, but more specifically they wanted to talk about why more and more American citizens are having to turn to crowd funding sites like go fund me to pay for their healthcare. Solomon said that when he started the site, you know, it was just a place for people to come and get money for their ideas, get money. Maybe for a honeymoon or a wedding. There were was a healthcare category, but it was small. You know, nobody really paid attention to that. But in the nine years since this company started funding, healthcare operations has become the number one draw to that website. One third of their crowdfunding campaigns right now are for people to pay their medical bills, either current or expected. Our healthcare system in the United States is so broken that we’re having to turn to crowdfunding to pay off our bills.

That’s a broken system and that’s what Solomon is trying to tell us. You know, the CEO of GoFund Me says he’s been able to, he now sees the gaps in our healthcare system. He now sees how bad it is and we need to do the same thing I had. Seriously. I encourage people, first of all, give, if you can, I understand that’s not possible for most of us. A lot of us are in the same boat. I don’t want to get into specifics here, but, but I’ve got thousands of dollars in back medical bills sitting there waiting, pay them off as I can send a little bit of money here and there, but I’m not immune and I know what it’s like. I know it’s like the freak out and have those bills piling up and you get more and more and you get the, the collection notices, you know the disguised as attorney letters say like, oh, we’re going to, we’re going to turn the Emory have to do something about this.

We’re going to do something. Why make payments when I can? It’s not always. Sometimes it’s more than others, but it hurts and it’s stressful and this system is broken and I have not yet turned a crowd funding. I, I’m choosing not to do that. But too many people don’t have that option. They can’t even make the small payments every now and then. And that’s why things like this have exploded. The crowdfunding I, we’re one step away basically from having people have to sit on street corners with cardboard signs and a hat saying, please give what you can. I had cancer and now my life is ruined because of medical bills. That’s the next step down from GoFund Me. And I’m not saying that to be insulting. I’m saying that’s how fucked up our system is. We have to get something better. There is no reason in the richest country in the world that’s been $750 billion a year on the Pentagon, why anybody in this country should go into debt because of medical care? Because they got sick cause that’s what it is at the end of the day because you got sick or hurt. It could ruin financially the rest of your life, and that’s by design. That is what capitalism gave us because at least with regards to the healthcare industry, capitalism has failed. The only option, the only option is for a government run program that covers every single American citizen and is able to negotiate drug prices, hospital prices, Dr prices and surgery prices. Short of those fixes, things are going to get much, much worse in this country.