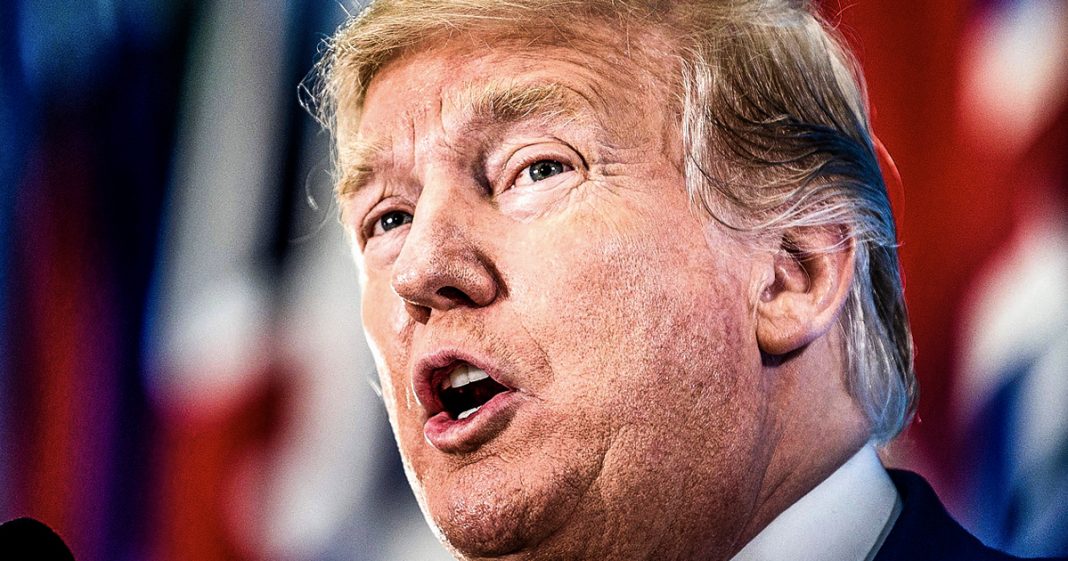 According to a new report by The New York Times, Donald Trump lied about his net worth in order to secure a loan from Deutsche Bank. The bank ended up loaning him more than $2 billion over the course of many years, but if Trump lied on the application forms then he absolutely committed bank fraud. The report says that Trump inflated his net worth from $788 million to $3 billion in order to get the loans. Ring of Fire’s Farron Cousins explains what happened.

According to a new report by The New York Times, Donald Trump almost definitely committed bank fraud between the late 1990s and the year 2016 at issue, which is what the New York Times has discovered, is the fact that Donald Trump allegedly inflated his net worth in order to get loans from Deutsche Bank. And in that period of time, between the late 1990s to the year 2016 Deutsche Bank ended up loaning him $2 billion to keep his business afloat. And as Deutsche Bank allegedly found out in 2005 Donald Trump had inflated his net worth on his application forms. He lied about it at the time he was worth roughly $788 million. But he told the bank that he was trying to get a loan from that he was worth about $3 billion. The bank uncovered this and said, wait, hold up your own financial forms and statements here. Show that you’re worth 788 million, but you told us you’re worth 3 billion.

Ah, screw it. What the hell? We’re going to give you the loans any way. Deutsche Bank, knowing that he lied to them, decided to give him the loans anyway. Huh? Now, if I were to go into a bank later today and tell them, hey, I want to buy a new house, I’m worth $1 million, give me money. They would probably say, well, uh, hold up dude. We’re going to need some, some documentation to show all of this net worth. Make sure you’re actually worth $1 million. I’m not, by the way, not even, not even close actually. Um, why didn’t Deutsche Bank do this with Donald Trump? You know, I think this story goes a lot deeper than just bank fraud. I think there’s something else at play here, and I think that’s why Deutsche Bank has had their records seized by federal authorities because you don’t just give a man $2 billion after he lied to you about his net worth and say, ah, we’ll give you a do over on this one.

Don’t worry about it. No, no, no. Something deeper is happening here. This is not how banks work. Banks don’t give you billions of dollars, especially not after you’ve lied to them. And especially after you’ve tanked a lot of different businesses and they know that you’ve got a shady past. This is a much deeper story than what the New York Times was able to report. And I think the reason for that is because we do not yet have all the details, but I will say this, investigators are working on it in the state of New York. Deutsche Bank has been handy over records. The New York attorney general and the southern district of New York prosecutors have been going through Donald Trump’s financial records. And if he did lie to the bank, they’re going to know about that. And yes, that would be prosecutable as bank fraud, wire fraud, whatever it is, they can prosecute him on it. But I think that’s just the tip of the iceberg. There has to be a reason why Deutsche Bank decided to give him a couple billion dollars even after he lied to them. There is much more to this story and I cannot wait for the rest of it to finally be revealed.