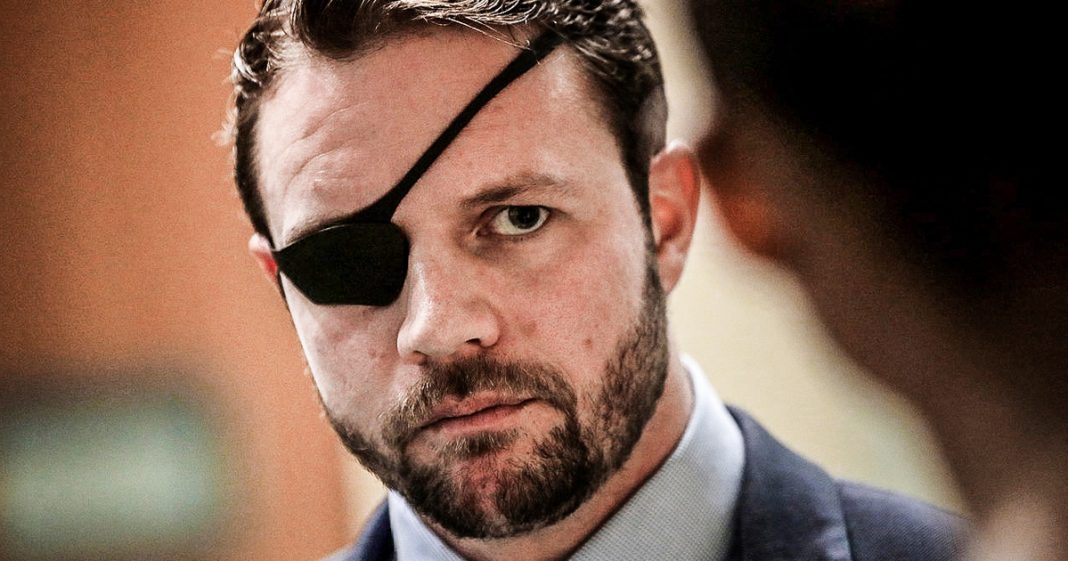 Republican Freshman Representative Dan Crenshaw politely tweeted out that Donald Trump should stop talking about John McCain. That mild request, in which Crenshaw didn’t even tag the President so he could see it, sparked massive outrage from crazed Trump supporters who believe that Trump can do no wrong and that McCain is some kind of traitor because he didn’t blindly follow the President. Ring of Fire’s Farron Cousins discusses this.

Republican congressman Dan Crenshaw, uh, the Texas freshmen who, uh, kind of made headlines and became a household name after Saturday night live, mocked him, uh, for having an eyepatch cause he lost an eye during his service in the military. They had them on, made peace with him. So everybody kind of knows who Dan Crenshaw is. He is a rising star in the Republican Party. I do not agree with his policies whatsoever. And he said some pretty horrific things, uh, on social media over the last few months. But nonetheless, Dan Crenshaw Thursday tweets out a very simple and polite request. And it was Mr President seriously stopped talking about Senator McCain. He didn’t tag the president and the tweet, you know, did it didn’t have the courage to go that far. And so Donald Trump could see it recedes. Mr President, please stop talking about John McCain. Seriously stop talking about John McCain. And I think a lot of us agree with that.

Speaker 1: (01:00)
Even those of us who despise John McCain, shut up, man. Honestly, it’s not even relevant or important and nobody cares. And you’re making yourself look like, and even worse human being than we already thought you were Mr. Trump. So just shut the hell up. Well, that’s not how some of these Hardcore MAGA folks are. And they got super pissed at Dan Crenshaw and here are some of the responses and I have to warn you, there’s some language here. So the, you know, be careful with the volume, but here it is, uh, go. Righto on us Dan, and you’ll be a one term wonder. McCain may have had honor in the war, but he died a trade or working for dims to stage crimes. That never happened. That man was a piece of shit. Wartime service doesn’t give you a lifetime immunity against consequences of shit behavior. Here’s another one.

Seriously open your eyes. Brother McCain was a trader for his entire life. His collusion with foreign countries against an elected POTUS is beyond the pale. Dan, you had a good start politically, but you just screwed up big time. The president, we’ll talk about what he wants to talk about as the Russia hoax continues to be revealed. He’ll be talking about a lot of people that have betrayed the citizens of the u s and none of them sacred to us. Mind your damn business. It’s you who needs to stop. Have you apologize to representative king for your Horse Shit resolution, calling him a racist fuck off punk.

Speaker 1: (02:32)
Unlike the rest of you in Washington DC, the president has a pair pair of what bone spurs. It’s time that some of you are the right. Learn that trait. I respect your military service as most people on my team have served. Not really, but you don’t have the right to be an asshole and a trader afterwards. And another one here is the last one. Seriously, McCain is a trader. Colluder turned on us. He can rott in hell. Rot was spelled with two t’s by the way there. Anyway, every one of these people is nuts and I have no problem saying that these folks are nuts. You’re nuts. You need help. And I hope that you get help because this is not normal. This is not rational. This is not okay. And I have attack John McCain on this program, on ring of fire radio on every form of ring of fire we’ve literally ever had since 2007 okay.

I do not agree with John McCain. I did not like him, but to to say that things like Trump has a pair and the rest of you don’t. You’re literally talking to a dude, Dan Crenshaw, who lost an eye serving as a navy seal. Okay? I may not like damn Crenshaw or his policies, but I’m not going to dispute the fact that he has a pair. And you’re saying that Crenshaw is the week one. The guy again lost an eye serving in the military, but the guy who has a pair is the one who faked having bone spurs so that he wouldn’t have to go to Vietnam. That’s why I say these people are nuts. They’re denying reality. They’re pretending what is real is not. John McCain was a lot of things, but a traitor to the United States or the US citizenry. He absolutely was not.