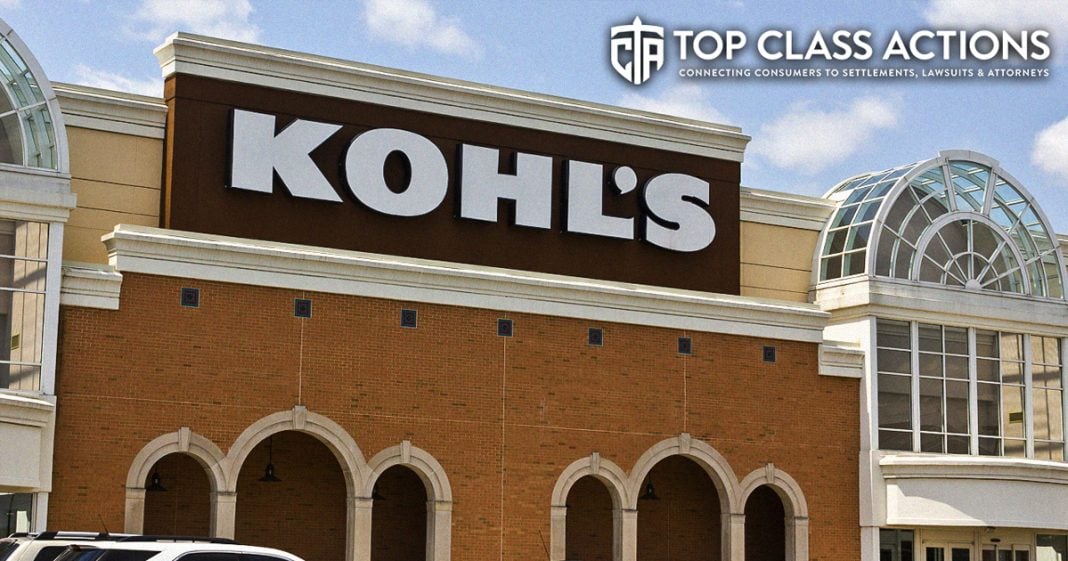 A $1.8 million settlement has been proposed to resolve claims that Kohl’s and Capital One deceptively charged consumers for credit monitoring. The settlement would benefit a Class of consumers who opened a Kohl’s Private Label Credit Card before Apr. 11, 2011 and who, between Feb. 13, 2012 and Oct. 31, 2013, paid $14.99 a month for PrivacyGuard but did not complete the second enrollment step. Ring of Fire’s Farron Cousins discusses this issue with Scott Hardy from Top Class Actions.

Farron Cousins:                  For quite some time now, some of these big box retailers here in the United States have been offering their own credit card that only works for their store. Now it’s a great way if you know you need to make a big purchase one time at one of these stores, you can use these cards. Many stores offer discounts on everything you purchase if you put it on your store bought credit card.

But we have to understand that these businesses, the, the Walmarts, the Best Buys the Lowes, they’re not banks. And these banks are actually the ones kind of working behind the scenes, pulling the strings, financing these credit cards. And as we’ve seen over the years, banks aren’t exactly the most honest people here in the United States and it’s their dishonesty that has led to a new class action. Joining me to talk about this is Scott Hardy from topclassactions.com.

So Scott, we have Kohl’s, major department store growing all throughout here in the United States. They were using Capital One for their store credit cards and Kohl’s and capital one kind of came up with an idea of, hey, how about you when you sign up for this card, why don’t you also get this protection plan that we have? You know, we’re going to monitor your credit, we’re going to monitor everything, make sure there is no fraud taking place. But it wasn’t as good natured and, as the companies wanted it to be, was it?

Scott Hardy:                          No, it really wasn’t and this was obviously just a cash drag, a cash grab by Kohl’s to try to, you know, raise some more money. And this class action, it shows it by the discovery and that’s one of the, one of the things about class actions is that, excuse me, when you file these class actions, the, the plaintiffs will go forward and they’ll do a lot of digging through the records. So they filed that class action because they think that what this company did was illegal.

Once that class action is filed, they go through the discovery process and they start subpoenaing documents. And so they start hitting that company up and saying, all right, I want everything that you’ve got related to a Kohl’s private label credit card and PrivacyGuard. And so Kohl’s starts putting forward these documents and the attorneys dig through them and this is part of, of where the attorneys are, are you know, really making their money or that they’re going to be charging later on.

But this is a ton of work because they’ve got hundreds if not thousands of pages of documents that they are combing through to find things out. And one of the interesting things that you find out when you start looking at this class action is that Kohl’s set up this program and we’re, you know for $14.99 a month that when you set up your, your, your credit card, you sign up for PrivacyGuard and it’s a product with little or no value.

But according to the records from this, that came through from, from discovery as little as 12% of the consumers enrolled in PrivacyGuard actually completed both steps of the enrollment process. Because the first step is you’re signed up. The second step is you have to actually put, fill in your information and it looks at maybe 12% and that’s it actually finished the second step, which is abysmal, but Kohl’s charged tens of thousands of people that $14.99 a month for years.

Farron Cousins:                  And they hadn’t completed the process. So they were paying for a product and they weren’t even getting the protection that this product was allegedly supposed to be giving them ostensibly because they didn’t know. You know, they knew, okay, yes, so PrivacyGuard, that sounds great, but they didn’t realize they had to go in and do all of these steps, fill out the form, submit the application.

But otherwise, if even if you don’t do that, Kohl’s still said, you know what, we’re still going to charge you even though you can’t even be protected by this program yet because you didn’t finish the application process. But we’re also, I guess just not going to tell you that you haven’t completed the process and that you’re not protected. And when you take a look at this size here, you’ve got 16,587 consumers who are currently a part of this settlement. 16,587 people who were being charged $15 every single month.

Scott Hardy:                          Exactly and actually looking at the records, we’ve got more than 30,000 people that were enrolled, but somewhere in the neighborhood of 16,000 qualify, potentially qualify for this class action. So we want to make sure that our viewers out there are, that had their Kohl’s credit card. If you did submit your information. And other interesting point about this settlement is that Kohl’s raked in $1.9 million from these fees and $1.8 million is going back to the consumers. So that’s pretty awesome that the majority of money that Kohl’s made is actually going to get right back in the pockets of those that were potentially impacted.

Farron Cousins:                  Absolutely. And a lot of people, you know, I know my wife is a great example of this. She has a Kohl’s card and she uses it because if you use your Kohl’s card, you get a really big discount. You know, you can get 10% to 20% off your entire purchase. Same thing happens with, you know, Best Buy cards or, or Lowe’s cards, things like that. It’s not that you need it because you can’t afford the clothes.

My wife, she’ll, she’ll buy the stuff on the Kohl’s card and then about two days later, once it’s posted to the account, she just pays it off. She wanted the, you know, big discount you get. So there’s probably a lot of people who have these kinds of cards, you know, who may not understand this because they don’t pay a ton of attention to their credit card because they know they just immediately pay it off.

They only had it for the discount. So everybody needs to be aware of this. Everybody needs to pay a little bit more attention. If you have a Kohl’s card, go check your account, log into it, see what’s happening there. Follow the link in the description of this video for all of the details about this particular story. And at the same time too check your other store credit card accounts.

Make sure you’re not getting any kind of monthly fee for something that you didn’t either sign up for or didn’t finish signing up for. Because my gut tells me just based on what we’ve seen over the years, Scott, both you and I have done this for a long time. There’s probably some other cards out there too that are charging consumers for things that they’re not actually getting.

Scott Hardy:                          Yeah and we would love to know about that. So if it’s not a Kohl’s card but you see a similar type charge that you didn’t sign up for on your credit card, go to Top Class Actions. Hit the start a class action button and let the lawyers that we work with know about it so they can investigate it and see if we can nail those guys as well and get some cash back in your pockets.

Farron Cousins:                  Absolutely. And while you’re there at topclassactions.com make sure you sign up for their newsletter. It is the best way to stay informed about the issues that matter most to American consumers. Scott Hardy, Top Class Actions. Thank you very much for talking with us today.