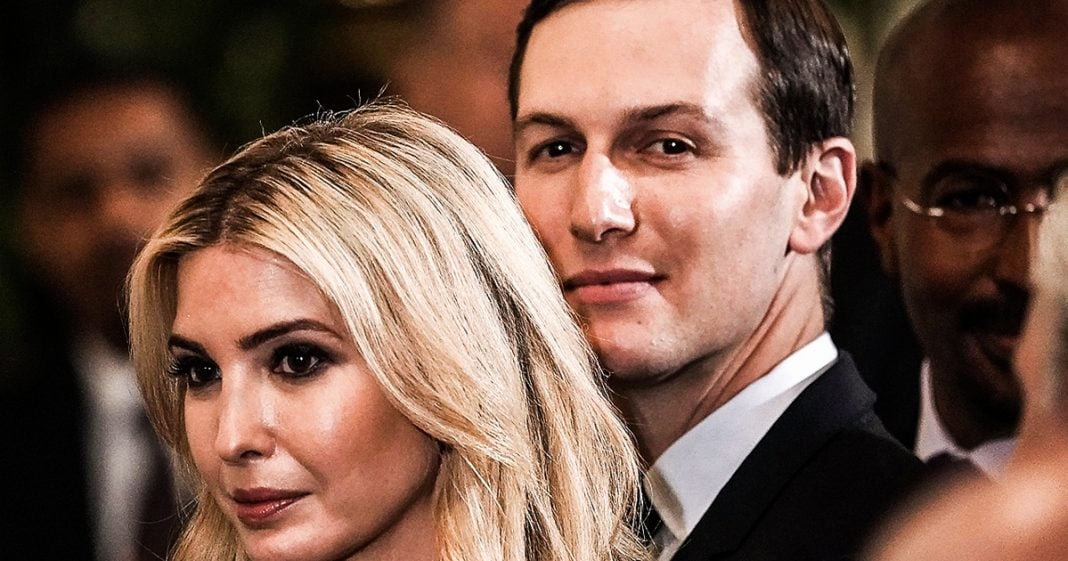 Jared Kushner’s own lawyer may have inadvertently gotten his client in a lot of trouble during a Congressional testimony a few months ago when he admitted that Jared is using private email accounts and the message-deleting app WhatsApp to do official business in his capacity at the White House. This is similar to the same “criminal activity” that Trump supporters alleged that Hillary Clinton engaged in, except on a much larger scale. Ring of Fire’s Farron Cousins discusses this.

So it looks like Jared Kushner, Ivanka Trump, and at least six other officials from the Trump administration might be guilty of the exact same crime that they have accused Hillary Clinton of being guilty of for the last few years. And that is using a private personal email accounts for official and classified government business. Now, Jared Kushner appears to be one of the worst offenders and that’s actually according to his own lawyer and congressional testimony that he gave back in December. His attorney told the House of Representatives that at chaired Kushner uses a private email account for official business and to send classified information to foreign leaders. We know that he does that. What’s the big deal? Oh, he also uses what’s APP, the APP sending or text message app that automatically deletes the data so that there’s no record that it ever happened. So what’s the big deal? Kushner’s lawyer told the House of Representatives? Well, the big deal for anyone who’s been paying attention to politics for the last few years is that you can’t use a private email or messaging service to send classified information.

I may correct me if I’m wrong, but I believe we have had hearings in the House of Representatives. We had a massive FBI investigation over Hillary Clinton’s use of private email to send classified information. James Comey came out even after the investigation ended and said, hey, as she acted carelessly, this wasn’t a smart idea, but there was no criminal activity that took place and there is no evidence that any of our emails were hacked or intercepted. So no harm, just stupidity. And now we have these same people who would get crowds to chant, lock her up, doing the exact same thing, except it’s not the exact same thing because it’s to a much larger degree and they’re using apps that don’t create a paper trail. Now, Mr Kushner, his lawyer has now come out and actually said that, no, I never said he uses What’s APP. That’s not true. Okay, well I’m going to go ahead and trust Alijah Cummings who says that you said this thing over you because now you realize, oops, I screwed up. And if Jared Kushner is sending classified information without a paper trail, that is a violation of federal law. We have to have records. Same thing with Ivanka Trump. Apparently she has not been keeping records and copies of her emails cause she’s using a private email account and that is also against the law. They are members of the cabinet. They have to do that.

Kushner’s lawyer also said that he doesn’t know if classified Info was sent through that private messaging APP. Of course that was prior to saying no. I never said he used the messaging app so the lawyer stories already changing. Jared and Ivanka are once again implicated in criminal activity and it just so happens to be the same criminal activity that has gotten Donald Trump’s rabid base so fired up still to this day demanding more investigations complete with a prison sentence at the end of it for Hillary Clinton for doing what Kushner and Ivanka are doing just to a much smaller degree.

If you’re going to call for an investigation of Hillary, you have to call for an investigation of Jared and Ivanka. That’s just how it works. They were doing the same thing and their own lawyer admitted it to the House of Representatives, and even though his story has changed now, that either means that he’s lying because he realized he screwed up or he straight up lied to the House of Representatives a few months ago, which then is going to put him in a lot of legal jeopardy. This doesn’t end well for any of the parties involved in. If I were Jared Kushner, I’d probably go ahead and hire a better lawyer at this point.