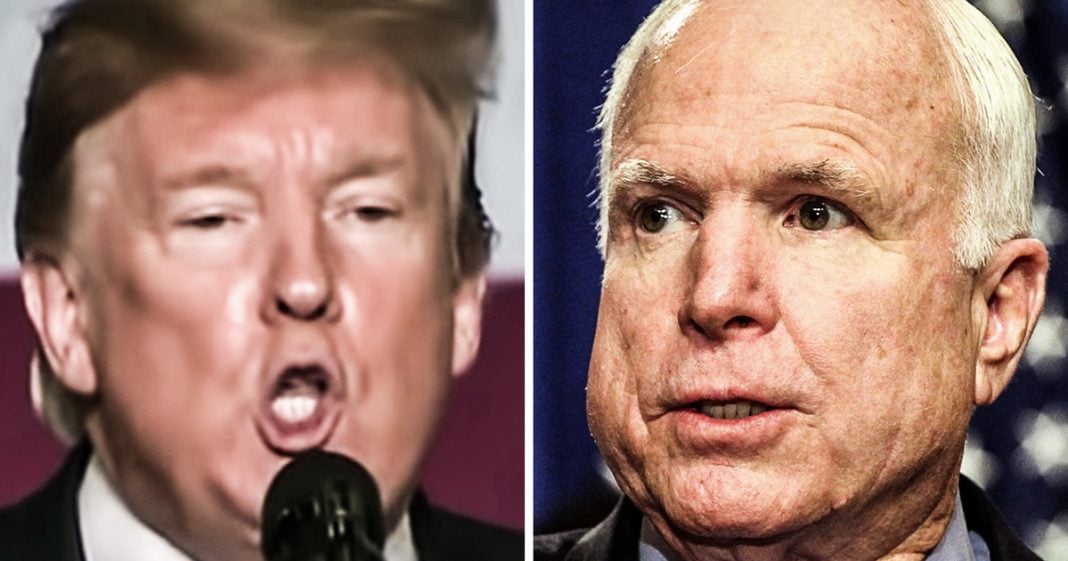 During a speech on Wednesday in Ohio, Donald Trump defended his attacks on Senator John McCain by saying that McCain was responsible for delivering the Steele Dossier to the public, and also that McCain didn’t thank him for the funeral that he “approved” for him (because he wasn’t alive.) Trump is really going off the deep end, and his attacks on McCain are starting to backfire among his supporters. Ring of Fire’s Farron Cousins discusses this.

Yesterday, Donald Trump headed to a tank factory in Ohio where he spoke to workers about how much he just hates John McCain. Here’s a clip.

John McCain received the, uh, uh, fake and phony dossier. Do you hear about the Duchesne? It was paid for by Crooked Hillary Clinton, right? And John McCain got it. He got it. And what did he do? Didn’t call me. He turned it over to the FBI hoping to put me in jeopardy. And that’s not the nicest thing to do. You know, when those people say, because I’m a very loyal person, John McCain, campaign for years to repeal and replace Obamacare for years in Arizona. Great State. I love the people of Arizona. But he campaigned for years for repeal and replace. So did rob. So did a lot of centers. When he finally had the chance to do it, he voted against repeal and replace. He voted against the two o’clock in the morning. Remember? Thumbs down. We said, what the hell happened? I endorsed him at his request and I gave him the kind of funeral that he wanted, which as president, I had to approve. I don’t care about this. I didn’t get, thank you. That’s okay.

Okay, so the president of the United States is apparently mad that a dead man didn’t thank him for his funeral role. Ha. Who? Who was supposed to thank you. Was it John McCain himself? Because I don’t think dead people can speak and I don’t think he’s going to come back from the grave as Zombie John McCain just to say thank you or maybe he’s going to haunt you for the rest of your days walking around behind you with ghost form saying thanks for the funeral. Here’s the thing. First and foremost, Donald Trump is lying about approving the funeral. He didn’t have anything to do with it. He allowed the body to be transported on Air Force two and that is it. That was the extent of Donald Trump’s involvement. In John McCain’s funeral, the Senate passed a resolution that allowed for the massive funeral, the body lying in state that allowed all of that to happen. That was the senate. Trump had nothing to do with it. He was actually asked by the family to not even show up to the funeral, but Trump wants credit for it. He wants the dead man to rise from the grave and thank him for it. He wants the grieving family to walk up and say, Oh, thank you so much. I, I know you’ve been horrible to my husband or my father ever since you entered politics, but thank you for letting him fly on your plane for an hour or two. That’s really thoughtful. You Jack Ass.

I am no fan of John McCain. John McCain does not necessarily deserve all of the admiration and praise that he is currently getting. I do understand that he is a war survivor. He is a torture survivor and he is also during his time in the Senate was a strong advocate and critic for not torturing people. He was strongly against the Bush administration use of torture, but he damn sure supported their illegal wars. This is the same guy who on the 2008 campaign trail, not only gave us Sarah Pailin, but sang a little ditty about bombing Iran. Okay. John McCain is not a saint, not even close to it, but that doesn’t mean that what Donald Trump is doing right now is not completely disgusting because it is. He is picking on a dead man who he’s mad didn’t thank him. He’s making up lies still about the Steele dossier. Hell, at this point, one of the only things that hasn’t been confirmed from the Steele dossier is the pee tape.

Most of the other stuff has actually been confirmed. We know that it did happen, so even if McCain did take it, as Trump says and go running out there and distribute it to everybody, okay, where’s the harm in that? Most of it’s been confirmed at this point, but the truth is McCain had something that Trump never will. McCain did have people who loved him. McCain had people who liked him. John McCain had some friends, even some Democrat friends, people who are out there now defending him. Trump will never have that. He will never have anyone else in his life that cares about him because he doesn’t care about anyone else. He has alienated everyone. The only thing he cares about is money. The only thing he taught us kids to care about is money. John McCain, even though he had money by marrying a wealthy woman, he did have things that he enjoyed. He did stand for a few good things amongst some of the bad, but I think at this point all of the bad parts of John McCain’s passed his voting history, things like that. All the bad stuff that’s needed to be said has been said. There’s no need to go back into that. What we need to focus on right now is the fact that we have a sitting president who is trying to kick a dead guy because he’s mad about something that didn’t even actually happen that way.

If there is any good news out of any of this, it’s that it’s backfiring spectacularly for Donald Trump. Even the people on Fox News are starting to say, I don’t agree with this assessment. This is kind of weird. It’s a cringeworthy. Some Republicans are describing it as, even Lindsey Graham, who was one of John McCain’s closest friends, then became Trump’s biggest suck up, has said, I do not agree with this. I do not like this. Anthony Scaramucci, who was with the White House for an astounding 10 days a few years ago said this, this isn’t right. This isn’t normal. This isn’t okay. So the more he attacks John McCain, the more he’s alienating the very few people who are still standing by his side. This doesn’t end well for Donald Trump, no matter which way he tries to slice it.