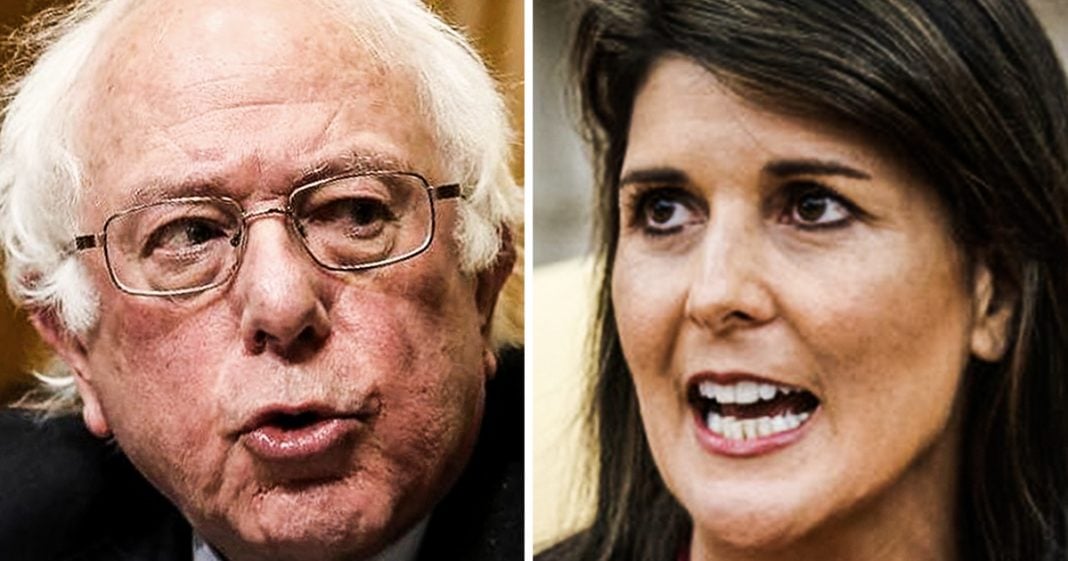 Former governor and UN Ambassador Nikki Haley tried to take a shot at Senator Bernie Sanders on Wednesday after he pointed out how gross the US healthcare system is compared to Finland. Haley threatened to show Bernie just how “bad” the Finnish system is, but she quickly learned that Finland, literally, has the best healthcare system in the world and a higher survival rate. Haley needs to realize that Bernie comes armed with facts, and if you want to battle him, you’d better do your homework. Ring of Fire’s Farron Cousins discusses this.

On Wednesday, former UN ambassador Nikki Haley thought she had Bernie Sanders cornered on Twitter. Man, she saw a tweet that he sent out and she was absolutely ready to pounce and put him in his place. The only problem is Nikki Haley is not a smart person, and her response to Bernie Sanders tweet proved that. Here’s what Bernie Sanders tweeted out, and Nakia Lewis enough, uh, in the United States, it costs on average $12,000 to have a baby in Finland. It costs $60. We’ve got to end the disgrace of our four, our of our profit driven healthcare system and passed Medicare for All. Apparently that tweets set Nikki Haley off and made her quit using her brain because she then responds with this. All right, Bernie Sanders, you’re not the woman having the baby. So I wouldn’t be out there talking about skimping on a woman when it comes to childbirth. Trust me. Nice try though.

Now the second part of the tweet is where she said, it shows how stupid she is, but, but correct me if I’m wrong. Did. Did she just say that a man can’t dictate a woman’s pregnancy? Really? Because if that’s the case, then hell yeah. We’re on the same side here, Nikki Haley, because I don’t think we need to be having men legislate what women can do when they’re pregnant. But you had to continue and make yourself look like an idiot. Here’s the second part. Healthcare costs are too high. That is true. But comparing us to Finland is ridiculous. Ask them how their healthcare is. You won’t like the answer. What Nikki Haley needs to understand, and she would understand this if she knew what a search engine was. Uh, Finland literally was voted this year as having the best healthcare on the planet by US News and World Report, best healthcare on the planet in Finland.

And you’re saying, why don’t you ask them, you’re not going to like the answer. No. They literally have the model in place and the care given to their citizens that everybody else in the world envies. And you’re sitting here trying to give a clot back to the man when you’re the one who didn’t do your homework, it gets even worse for Kelly. It cause not only are they rated the best healthcare on the planet, um, life expectancy a, the u s actually ranks lower than Finland. So Finland, so good with healthcare. There are people live longer than we do here in the United States. A Bloomberg index found that the US had one of the least efficient healthcare systems in the world while fenland ranked at number nine. So they’re in the top 10 of most efficient healthcare systems in the world. While the U S is down there at the bottom, the rate of infant mortality in the u s is three times higher than that in Finland, which actually had the lowest measured rate among European countries.

So your child is three times more likely to die after being birthed here in the United States than it is in Finland because they have better care. Um, we have the worst maternal mortality rate in the entire developed world. So you would have to go to a third world country. You know the places that don’t always have electricity or running water to find a country where women are more likely to die during childbirth than they are here in the United States. Nikki Haley, you failed in every single aspect of your response to Bernie Sanders and the people on Twitter were obviously very quick to let you know that, but you came across as unprepared, as completely unintelligent and absolutely willing to spit out right wing Republican talking points without ever bothering to spend five seconds online doing research to determine if they were true. A lot of people have said over the last few years then Nikki Haley may be gearing up for a 2024 presidential run, hell, maybe even 2020 if something happens to Donald Trump, but he’s removed from office by the end of this year. But I don’t think she can hack it. And I think this tweet proves that because if you’re not willing to do basic research before you get into an online argument in front of millions of people, then you stand no chance against any Democrat on a debate stage. Good luck with that.