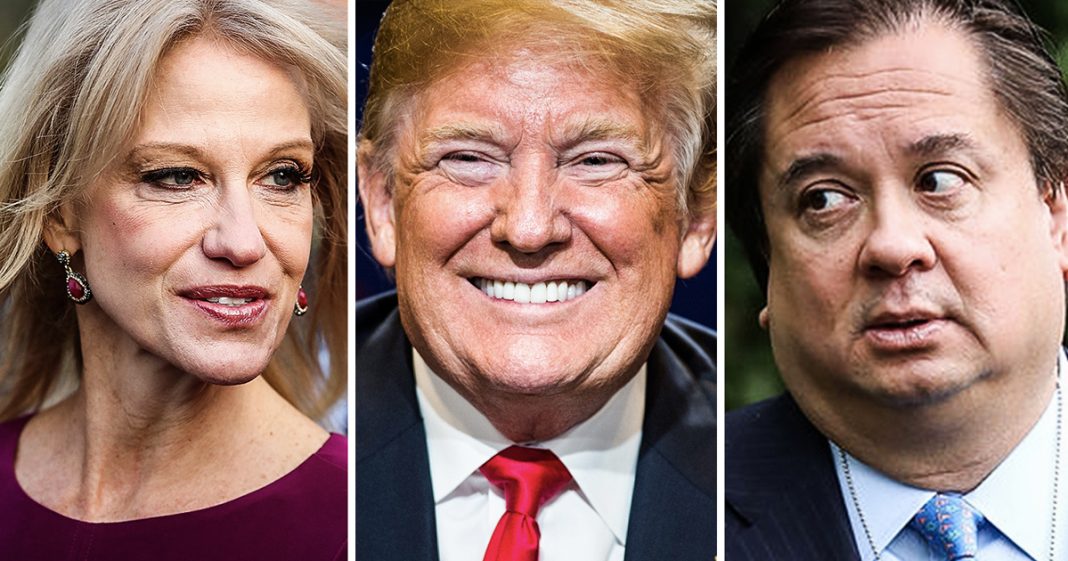 As the feud between Donald Trump and George Conway came to a head this week, Kellyanne Conway finally decided to take a side. And he chose Trump. She said that Trump wasn’t just going to sit back and take the “attacks” from her husband and that he was right to fire back. Does this woman have any shame? Is she even capable of feeling that emotion? Ring of Fire’s Farron Cousins explains what’s happening.

Well, the feud between Donald Trump and George Conway is still taking place. However, George’s wife, Kellyanne Conway finally decided to take a side in this feud. Unfortunately, she actually chose the side of the president over her own husband. I mean, she just works for Donald Trump. She actually took vows and signed a legal document to be married to George, and yet she can’t even bother to take his side over Donald Trump. Here’s what she told politico, said, Trump left it alone for months. Out of respect for me, and this is obviously referring to George’s constant attacks on Donald Trump, she goes on, but you think he shouldn’t respond when somebody, a nonmedical professional accuses him of having a mental disorder. You think he should just take that sitting down? Damn Kellyanne. You even when after your own husband, they’re like, this guy doesn’t know anything about medicine. No, but he’s actually using the same DSM that mental health professionals use.

He, he had the same tool. This, this one isn’t very hard to figure out, Kellyanne, but it’s nice to know where your loyalties lie, right? I mean, what happens if one of your kids walks up and says, mommy, Donald Trump’s a duty head. I don’t like him. Are you going to tell the president and say, you’re going to take this from her? You got to just get to take this sitting down. It went seriously. Kelly had, where does it end? At what point do you stop being Ted Cruz and just lie down and let the man attack your family and you finally stand up and say, you know what? I’ve built a life with these people and I’ve got a really crappy job with you that’s destroying any chance of future employment. Maybe I’m going to go side with the people that I love and cherish and have started a family and a life with, but she won’t do that and that’s what’s so disgusting to me.

That is the most disgusting thing about this entire feud. Now, Donald Trump, one of his most recent tweets about George Conway have to read this because this tweet happened before, before Kellyanne Conway came out and took Trump’s side over her husband. Here it is. George Conway, often referred to as Mr Kellyanne Conway, by those who know him is very jealous of his wife success and angry that I, with her help, didn’t give him the job he so desperately wanted. I barely know him, but just take a look, a stone cold loser and husband from hell, a stone cold loser and husband from Hell.

And after seeing that, Kellyanne Conway says, well, what is he supposed to do? Just sit there and take it. No, my husband doesn’t know anything about medicine. He shouldn’t be saying these things. And Trump is right basically to call him a stone cold loser and husband from Hell. Now I also find it worth pointing out two things here. First and foremost, George Conway did not seek a job with the Trump administration. That is documented. Trump is lying about that. And the second thing, if Barack Obama had ever called any human being ever while he was president, a stone cold loser and or husband from hell, um, he would have already been impeached and removed from office by the Republicans. I just have to throw that out because this is absolute and utter insanity. We’re supposed to be okay with our president acting like a child and then we’re supposed to be okay with his closest advisor slash best friend Kelly and Conway taking his side over the man that she married.

Now I’m not saying you always got to stand by your spouse when they screw up or do something bad, but George didn’t do that. George is right here. George is the only one in the Conway household, apparently standing up for the norms of the United States. And let’s not make a saint out of a center here though, cause George Conway is still a pretty crappy guy and I think that’s been missed in a lot of the coverage here. He is a conservative lawyer who has connections to some of these conservative legal think tanks, the ones who keep giving us these disgusting corporate as judges who are serving lifetime appointments and destroying our judiciary. George is not a good guy, but in this particular instance, he is on the correct side of history.