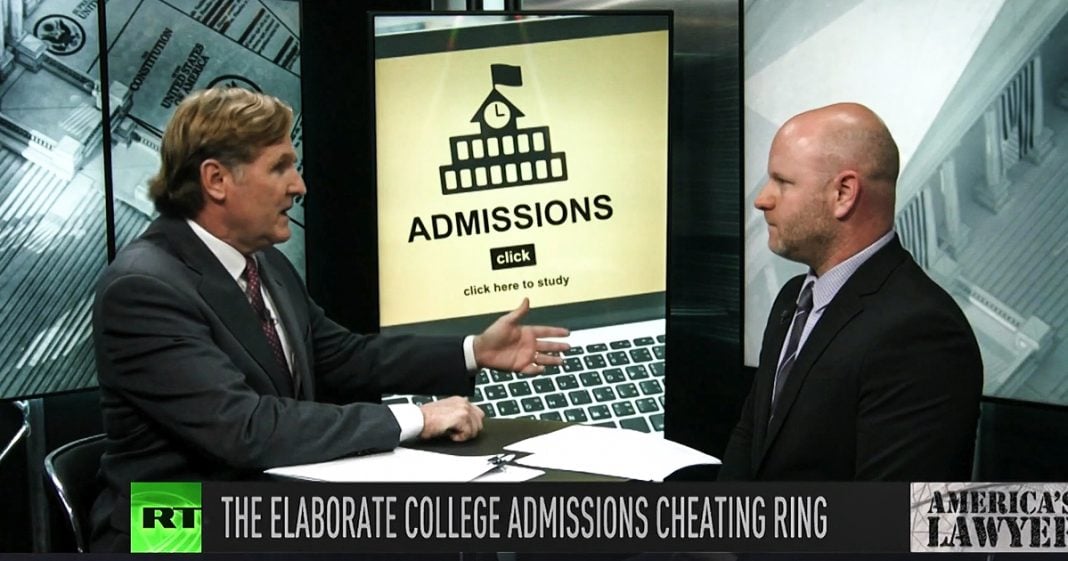 Via America’s Lawyer: Mike Papantonio and Trial Magazine Executive Editor Farron Cousins discuss the college admissions scandal which has revealed a massive web of corruption between Hollywood, the business world, and prestigious universities.

Mike Papantonio:             The college admissions scandal that was revealed last week, has exposed a massive web of corruption between Hollywood, the business world and prestigious universities. Farron Cousins from the Trial Lawyer Magazine joins me now to talk about it. You know the thing, there’s so many things about this that catch your eye, but the, the, the most troubling thing was where, where kids were brought in and the testing was just a scam.

Where they show up, they have their special proctor that actually changes, corrects, corrects the, the test on the site and then it goes to the university. This is, this organization is called the Key and it, what is it 81 or so of these organizations around the country?

Farron Cousins:                  Yeah, that’s something a lot of people didn’t quite understand. You know, this isn’t just one guy out in California running this scam. This is an international company. The 81 sites here in the US, it’s in five other countries around the planet and that is what this guy, William Singer, that was what he did. That’s why he started this because he understood I can make a lot of money. You know, this isn’t something that’s, that’s highly regulated behind closed doors.

The SAT, ACT market I guess. And he knew he could easily get away with it for a very long time. And that’s exactly what happened until, you know, the reason this was even uncovered is cause one of the CEOs who engaged in this was actually popped on a different crime and said, okay, go easy on me. Let me tell you about a thing you should know about. Had it not been for, for that CEO, we wouldn’t even know this today.

Mike Papantonio:             Okay. If I, if I look at this story, right, this is, this Singer has been been doing this 20 years. One form or fashion for about 20 years. And I think the thing that is most tangible, it’s the most tangible idea of it is to say, okay, my child has a learning disability, they have to have a testing process that lasts two days. Oh, by the way, it needs to happen in their home or it, it needs to happen somewhere that they’re comfortable.

They have the proctor there. You got, the proctors absolutely changing the answers. The proctors actually saying, comparing, ask the parents, give, give me a sample of their handwriting. And then the proctors then making those changes. That’s the most tangible part of it. The other part is it, you know, it’s, it’s where they, the Singer has figured out that he can bribe coaches. He can bribe the coach and he can say, look, coach let her in. She’s a great volleyball player.

Farron Cousins:                  Right. One of the things they would do you, aside from the testing scam, which was massive, he would also, I guess he had a consulting part to it where he would tell these parents, listen, go out, take your kid, get some photos taken of them playing this sport. And one of the things listed in the charges was that he had a parent, a wealthy parent. They had their kid they wanted on the water polo team.

So they took a picture of the kid in a pool and then photo shopped in the water polo stuff. Eventually, even Singer laughed behind closed doors. He said, wow, this is really fake looking. So they took the kids face and just put it on another kid’s head in a different photograph. And then through his charity with the Key, that’s where parents would give about $200,000, he would use that money as direct payment to the coaches and that’s what got the kids in.

Mike Papantonio:             There’s always, there’s always been this kind of this legacy thing in a university. My child went there, let my child in and oh by the way, I’m going to support this program, or support that. But that’s been going on for decades. That’s, that’s different than this. But what’s happened here, the difference is that this wasn’t just a legacy program. This wasn’t where, you know, my child wants into your university and if you’ll give him a chance, all support various programs as we go through college, that happens has been happening for decades.

This is far more direct than that. This is where I will bribe the coach, coach, let them in, and then everything happened. So, so as, as this progresses, Singer has already pled guilty. There’s no really, there’s no real question this happened. He admitted it happened. The prosecutors have all of the information and the investigation I’m sure we’ll continue.