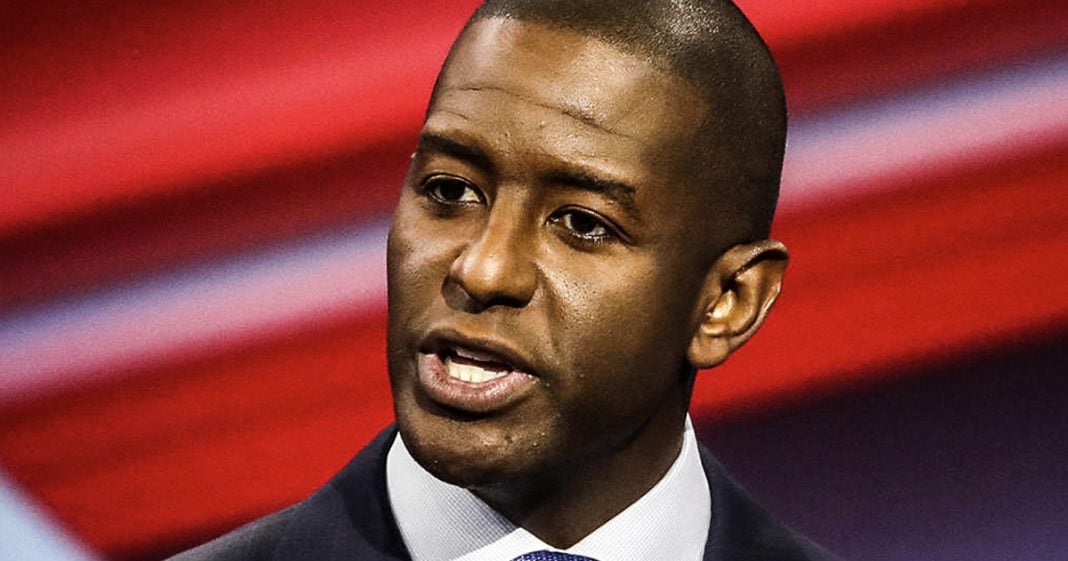 Former Florida gubernatorial candidate Andrew Gillum isn’t sitting around moping about losing his election this past November. Instead, he’s using his momentum and support to start a massive voter registration drive in the state of Florida with the hopes of changing the face of the electorate. Considering the fact that Florida voted to restore voting rights to 1.4 million former felons, the Florida electorate could look A LOT different in the next election, and Gillum is certainly hoping that it does. Ring of Fire’s Farron Cousins discusses this.

There’s lots of candidates who after they lose an election, they disappear or they take wonderful jobs working at think tanks, you know, becoming adjunct professors somewhere, you know, still working on policy, not really doing anything to effective just using their name to get out there. But then there’s other people who say, I created a lot of momentum with my campaign and I’m going to use that momentum, use that support to make the country a better place. And that is exactly what Andrew Gillum, the Democratic candidate for Florida governor, uh, back in the midterms who did not win. But that is what he’s doing right now. He is taking his support and his momentum and his name recognition. And he has launched a new voter registration drive here in the state of Florida. And this is a man who has almost $4 million still left in his campaign coffers money that could be used to help with this voter registration effort.

And here’s why this is so important. In the November elections, 64% of Florida voters headed to the polls and told the state, we want former felons to have their voting rights restored. So 64% it passed. That’s one point. 4 million former felons who are now eligible to vote. Now, the Republicans who run this disgusting state are still trying to block it just this week. They passed in committee in the house, a resolution that would prevent people from being able to get their voting rights back unless they went back and paid all of the court fees from when they were arrested, when they were tried. All of that, this is currently is not required. If you are a convicted felon, you do not have to pay the court fees, uh, to get your rights back. You only have to pay restitution to any victims that may have been a party to your crime or the victim of your crime, I guess.

So they want to make it harder. They’re essentially instituting a poll tax to make sure these 1.4 million people are not allowed to vote because they understand that right now there’s actually a few hundred thousand more registered Democrats than Republicans in the state of Florida. But we also have 3.6 million registered voters who are not registered with either political party, adding 1.4 million new voters to the voting rolls hell based on the most recent elections in the state of Florida. Adding half of that, or even adding half of half of that is more than enough to change the outcome of every single election that Florida has had since the year 2000 including the highly contested Bush v Gore race of 2000 literally half of half of half would’ve changed every single election in this state since the year 2000 that’s why this is important. And Andrew Gillum understands that and that’s why he’s spending his money. The for the Democratic Party is kicking in $2 million for voter registration and they’re gonna make sure they do what they have to, not just to get the former felons their right to vote. But other people nonvoters people sitting around saying, why vote? It doesn’t matter. This last election in the state of Florida proved it matters. It was so close in so many different races

that a few thousand people had they shown up, or had they had the right to vote, would have made this a very different state. And that is what Gillum is hoping to do along with a lot of us in this state ahead of the 2020 presidential election, Florida’s got 29 electoral votes, 29 so if every other state in this country, except for Florida were to vote the way it did in the 2016 presidential election, you’re going to be looking at a completely different outcome than we saw in 2016 and that is why what Andrew Gillum is doing now is so important.