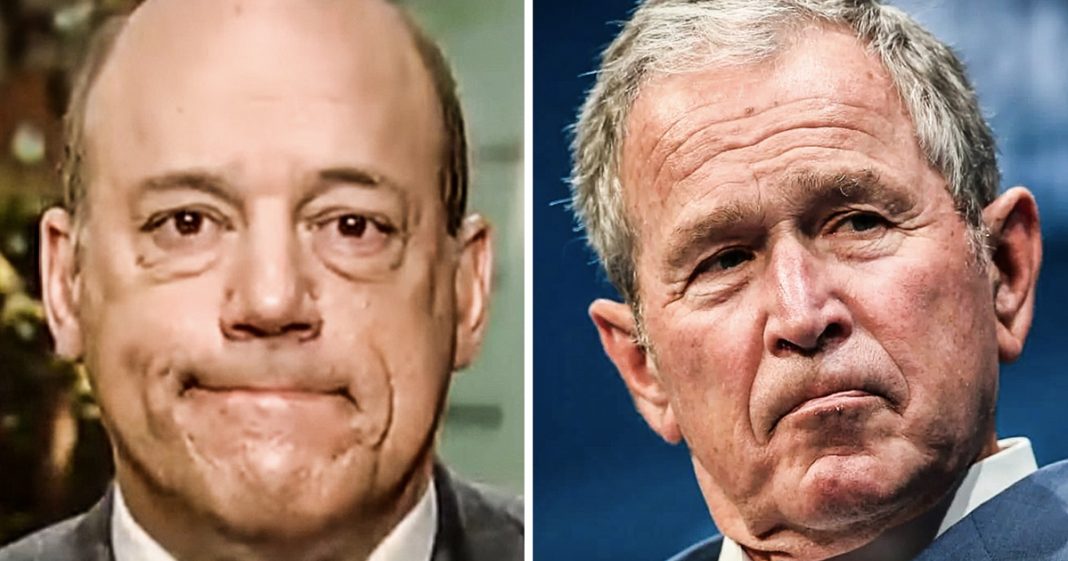 Ari Fleischer, the former press secretary for President George W. Bush, took some time on the 16th anniversary of the invasion of Iraq to remind us that the Bush administration DID NOT lie us into the war, but instead everyone just got their intelligence wrong. This is another lie. We’re 16 years into this quagmire and those responsible for it still can’t admit that they weren’t honest with the American public. Ring of Fire’s Farron Cousins discusses this.

Yesterday, mark the 16th anniversary from the date that the United States decided to invade Iraq. Ari Fleischer, George W. Bush has a press secretary during the run up to the Iraq war, decided to take the time not to commemorate the 4,500 dead US soldiers or the 300,000 dead Iraqi civilians and combatants, but instead took to Twitter, wrote a multi tweet thread about how nobody in the Bush administration lied us into the Iraq war. He swore up and down that no money lied. Stop saying we lied. Nobody lied. It’s just that all the intelligence was bad. But we were telling the truth based on this intelligence that later turned out to not be true. So there was no intentional or malicious lying taking place by anyone within the Bush administration. So says Ari Fleischer the guy who helps spread the lies that got us into the Iraq war. Now, plenty of people on Twitter, plenty of articles came out.

Everybody already refuted what Ari Fleischer had to say, because just like when he was press secretary, his entire litter, little, uh, Twitter screed was a lie. None of it was true except for the fact that, yeah, the intelligence agencies got it wrong. But what he left out was that not only did they get it wrong in some areas, but they actually had it right in plenty of other areas. It’s just that the Bush administration chose to ignore those parts. Like when the intelligence officials came and said, hey, we can’t find any evidence anywhere of nuclear weapons. And then Dick Cheney goes on TV and says, Oh yeah, there’s no question Saddam has nuclear weapons. Or when Condalisa Rice went on TV and said, well, they’ve got all these aluminum tubes, and they’re using those to build missiles. The probably nuclear missiles. Yeah. The intelligence community before those claims were made, told them these things aren’t happening.

So guess what, Ari, that is a malicious and intentional lie. The list is, is endless of all the lies this administration told to get us into Iraq. They lie to us in there. They didn’t know how to get out of there. Once they got in there, they didn’t even have an actual goal with this war other than George W. Bush. And Dick Cheney and Donald Rumsfeld trying to finish what Bush’s daddy started in the early nineties beyond that, they didn’t know what to do. They didn’t know how to get out, and that’s why we still have American troops over there interact 16 years later. But the worst part of it all is that nobody from that administration is willing to admit that they weren’t honest. Hell, back in, I think it was what, 2006 we got the Downing Street memo, maybe it was even 2005 were British officials, said that the u s is fixing intelligence around a specified goal of Iraq invasion.

Even the British knew that we were fixing our intelligence to support an invasion that happened. That was a thing and nothing happened to George W. Bush or anyone else from his administration. They should have all immediately upon taking office by Barack Obama had been prosecuted for their war crimes, for lying us into the war for torturing enemy combatants. Everything totally prosecutable. Very easy to prove. But Obama came to office and said, let us look forward, not backward. It’s actually what he said, and that’s why these people are walking around today. Hell, George W. Bush has getting praise from some Democrats now. He’s so sweet. He gave Michelle Obama a piece of candy at the funeral. What a, what a good guy. He couldn’t figure out how to get his rain Poncho on during Trump’s inauguration. He’s such a goofball. He’s a goofball who got hundreds of thousands of people across this planet killed, and he hasn’t shown a single bit of remorse for the lies that calls all those deaths. That’s not exactly the kind of guy we should be hoisting up on our shoulders and saying, look at this lovable idiot. Isn’t he cute?