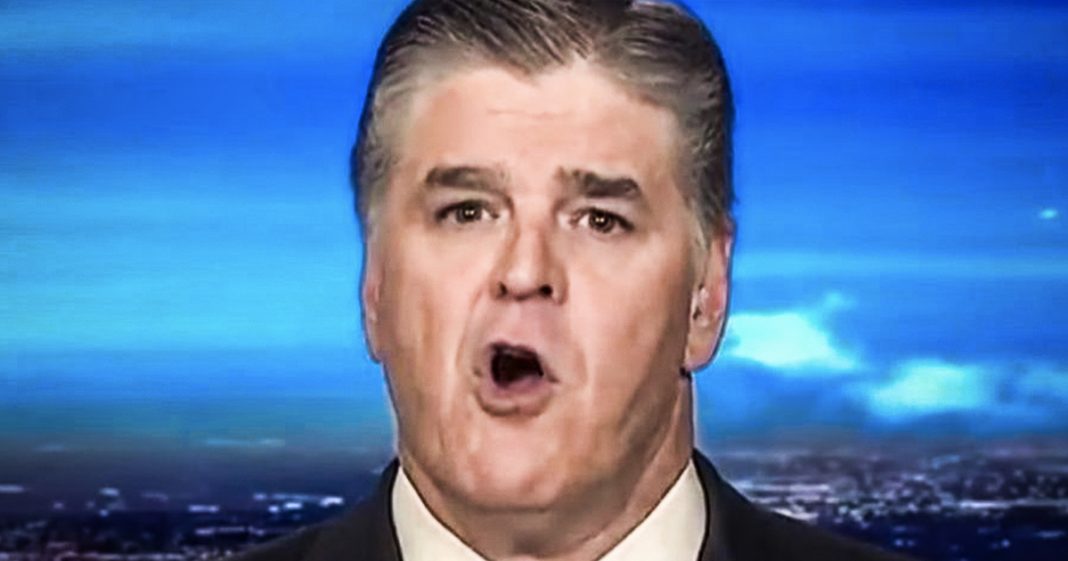 Sean Hannity is starting to absorb some of the paranoia that has gripped Donald Trump, and reports now say that Hannity believes the owners of Fox News are secretly out to get Trump. According to insiders, the network has been engaged in a form of “cold civil war” for a few years now, with the actual news division growing more and more angry over the antics and fact-free opinions of the on-air talent. Ring of Fire’s Farron Cousins explains what’s happening.

There’s no question that some of Donald Trump’s biggest supporters are the folks working over at Fox News, or at least the people working on air on Fox News. They’re always ready to jump in and defend the president, have his people on the air to defend him and explain why he is the greatest person who ever walked the face of the earth. But according to new reports, there may be trouble in paradise. And that troubles actually originating from Sean Hannity. Here’s what’s happening behind the scenes at Fox News, and this has apparently been happening since 2016 when a Rupert Murdoch was ousted or Roger Ailes, excuse me. In 2016 you see there’s a news division at Fox News and then you have the kind of entertainment opinion division. The news division is actually not bad. You know, that’s where a Fox News came up with a story about Stormy Daniels and the hush money payment, but then they killed it and the on air people never talked about it.

But the news division does consist of real investigative journalists doing real, honest, nonpartisan work. And they’re pissed off and have been for a very long time because they keep telling management that these buffoons over here, the Sean Hannity’s and Tucker Carlson’s and Laura Ingrahams and judge Jeanine Pirros, they’re giving us all a bad name. They’re making us all look stupid and foolish to which the on air people respond. Yeah, but we’re the ones who make the money for the network. So, oh well this is what they’re describing as a cold civil war. You know, there’s no real fighting going on yet, but it is between the two different factions in Fox News. And Sean Hannity believes that this is all because Lockland Murdoch, Rupert Murdoch’s son, who’s now taking control of Fox, he believes he has it out for Donald Trump. He believes that Lockland Murdoch wants Trump gone, and he’s been telling Donald Trump that.

And according to people close to Hannity, he’s actually considering not renewing his contract when it runs out in the year 2021 because he believes this network is about to make a leftward turn. Oh, all the Republicans are going to be gone. It’s just not the same as it was. Oh no, things are so bad for Sean Hannity and he’s fearful that the network is going to turn on his good buddy Donald Trump. Listen, Fox News and actually today does the, uh, completed their merger with part of the Fox entertainment corporation. So the Big Fox breakup is currently happening and being finalized. So Fox News is not immune from that. They actually have had to spin off into a separate company now and that could change things that might make things a little bit harder for the president to tune into his favorite cheerleading network. And Sean Hannity recognizes that and Sean Hannity’s trying to tell the president they’re out to get you.

I know you’re already paranoid, but apparently I am too. So we’ve got to stick together. It’s you and me buddy, till the end. They’re not going to take us down. Sean Hannity probably isn’t quite sane enough to be viewed by millions of people every single day. And yet he is. He sees some kind of conspiracy where one doesn’t exist and he does that on his television program as well. Nothing’s going to happen to Fox News. Fox News is always going to be Fox News. There may be times when it’s a little bit more tame than others, but at the end of the day, that is their brand. Their brand is hatred, their brand is lies, and their brand isn’t going to change most likely anytime in our lifetimes.