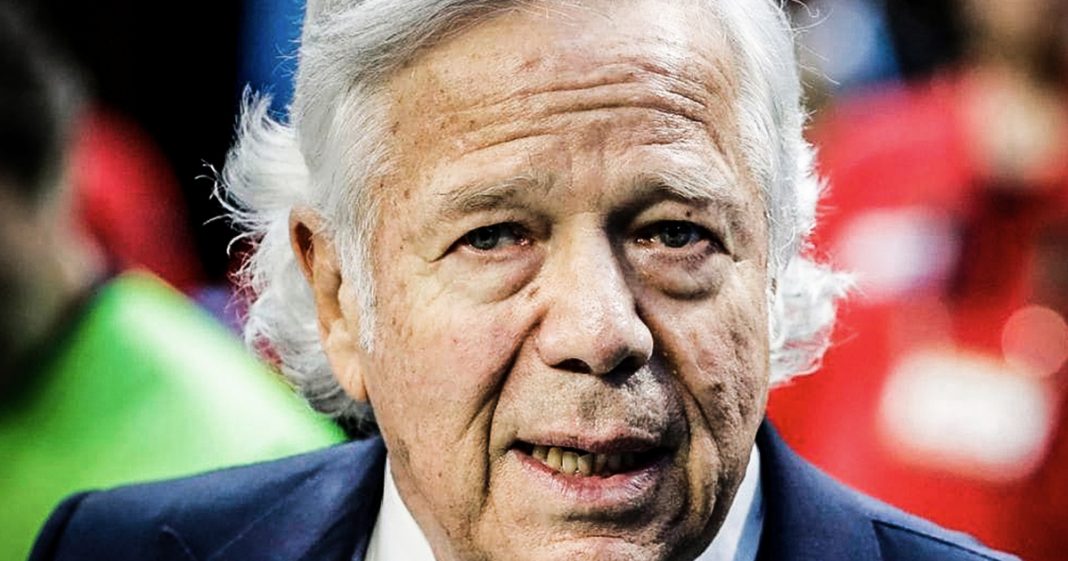 Robert Kraft, the Trump-loving owner of the New England Patriots football team, has been offered a very sweet deal by prosecutors in the state of Florida: All he has to do is admit that he’d be found guilty if his case went to trial and he’s free to go. That’s it. No real punishment, just an admission that he’s a scumbag and he’s off the hook. This is the kind of justice system that rich white men have enjoyed in the United States, especially in Florida, for far too long. Ring of Fire’s Farron Cousins discusses this.

Rich white guys in the United States of America might be the luckiest demographic in all of human history. Really. Um, this was on display earlier this week when it was announced that Florida prosecutors have decided to work out a plea deal with Robert Kraft, the Trump loving owner of the New England Patriots. A case you’re not familiar with it. A couple of weeks ago, Robert Kraft was, uh, arrested as part of this undercover sting that had been going on here in the state of Florida. Uh, there was this massage parlor chain that was also offering some prostitution services. Uh, Robert Kraft, I think on two occasions, I believe it was, decided to take them up on that offer. Got Arrested for solicitation of prostitution. Uh, as part of, uh, the sting that caught a several dozen people. Actually, in fact, there’s some pretty big names on that list that have not been released yet too, but nonetheless, prosecutors in Florida said, all right, Robert, we know you’ve pleaded not guilty, but here’s what we’re going to offer you.

Instead, if you just admit that you would have been found guilty if this thing went to trial, we’re going to let you go. You’re a rich white guy. You own what is arguably the best football team in the United States today. Why don’t you just tell us that you would have been found guilty and then you can go ahead and skidatal back up to New England. That is the plea deal that they’ve offered him. But they also said, well, why don’t you read, you know, the evidence and the charges that we have against you to make sure you’re comfortable saying, I would have been found guilty. Then after that, all he has to do is go through an STD test, hundred hours of community service and uh, take an online course or something to so he knows prostitution is not something you should go out and solicit and then you’re good.

You know, to me, this reminds me a lot of the Jeffrey Epstein case, and I know it’s not as disgusting, but that also originated from prosecutors down here in the state of Florida who seem to have no problem with men having sex with people who they shouldn’t be having sex with. Epstein got 13 months in prison. Robert Kraft is about to get off Scott free. I guarantee you this special little plea deal isn’t going to be offered to other people who got wrapped up in this sting, but it will be to Robert Kraft just like it was with Jeff Epstein, who is allowed to leave prison for half a day, six days a week. Why? Because they’re wealthy white men and wealthy white men do not face the same kind of justice here in the United States as everyone else.