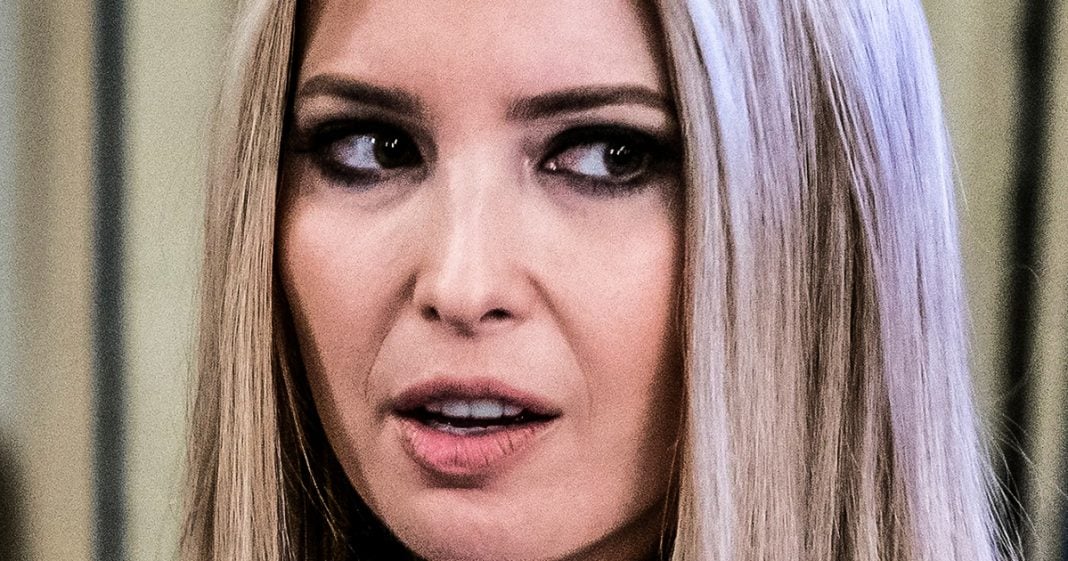 Ivanka Trump has never been regarded as a deep thinker, and her student loan debt proposal that she put forward this week helps us understand why. She wants to limit the kinds of loans that students and their parents can take out instead of trying to put an end to the predatory banks that are charging astronomical interest rates to students. This won’t solve the problem at all, it’ll just leave us with a far less educated public, as Ring of Fire’s Farron Cousins explains.

Nobody has ever accused Ivanka Trump of being a thought leader, uh, with regards to US policy. And she proved that she proved why we don’t view her as a thought leader this past Monday when she unveiled her proposal that she came up with all by herself on how to address the growing problem of student loan debt here in the United States. And here is what her proposal is. Let’s just limit the amount of, uh, people loaning money to students or their parents to pay for college. Let’s not let them have access to money to pay for their education. That is her plan. And now she claims that, oh, the reason we’re doing this is because then nobody’s going to have enough money to go to college. So then colleges are totally going to be forced to lower their prices. And then everybody can afford to go. Ideally, I guess in a, you know, free market, capitalistic system, that should be how it works.

But American capitalism does not work that way. If it did, we wouldn’t be paying more than $10 a pop for our prescription drugs. Instead, we have people who are dying because they can’t afford their drugs and big Pharma says, you know what, I’m just going to raise the prices again, anyway. That’s what colleges we’ll do. The real problem is that we have 44 million people here in the United States that currently holds some form of student loan debt, 44 million and the grand total of those debts is one and a half trillion dollars. The average millennial holds roughly $36,000 worth of student loan debt today and Ivanka Trump thinks that we can solve those people’s problems by just not lending money or limiting the number of banks or programs that will give people money to pay for college. This truly is one of the dumbest ideas I’ve seen come out of this administration and that is saying a lot.

The problem is that you have predatory banks, you have a dysfunctional department of education that refuses to do anything about the problem. Students are taking out these massive loans to pay for college tuition that is once again going to increase again this year. They’re paying astronomical interest rates on these loans. Whereas you know, basically prior to about 2004 you took out a federal student loan, you’re going to pay one or two maybe on the high end, 3% for that loan. That was it. You also had the option of, you know, applying for grants and other kinds of subsidies paid for by the federal government. If you graduated and then you took a job with the federal government, you could get is part of their a student loan debt forgiveness program, but Trump’s actually doing away with that program. This administration’s done away with a lot of the available grants for low income students.

The pell grants, things like that have been drastically reduced. They want to take more money out of it with their current budget, so they’re leaving students with no other option than to go to predatory banks who are going to charge them astronomical interest rates. But Ivanka thinks that that’s just fine. The real problem is that you got to put this indirect pressure on colleges to lower their prices. No, the federal government has to step in and yeah, get colleges to lower prices, but more importantly tell the banking industry that they’re not going to charge more than one or 2% on these student loans and they’re going to have to reinstitute some kind of debt forgiveness program in order to get this one and a half trillion dollar burden off the backs of 44 million Americans. The ultimate goal obviously is debt free college for American citizens, but this administration isn’t going to do that.

We’re going to have to wait for some kind of change in leadership in Washington DC for that to become a reality. In the meantime, we’re going to be subjected to Ivanka Trump’s stupid plan to help colleges, not students and banks actually to help them increase their profits while the students are the ones getting screwed and if she is successful and she does limit the number of banks are the kinds of loans that students and their parents can get to pay for college. All that’s going to do is leave us as a country with a larger population that doesn’t have any form of higher education, and for many industries would therefore be considered completely on hireable. That’s Ivanka, his plan, and that is what it would do.