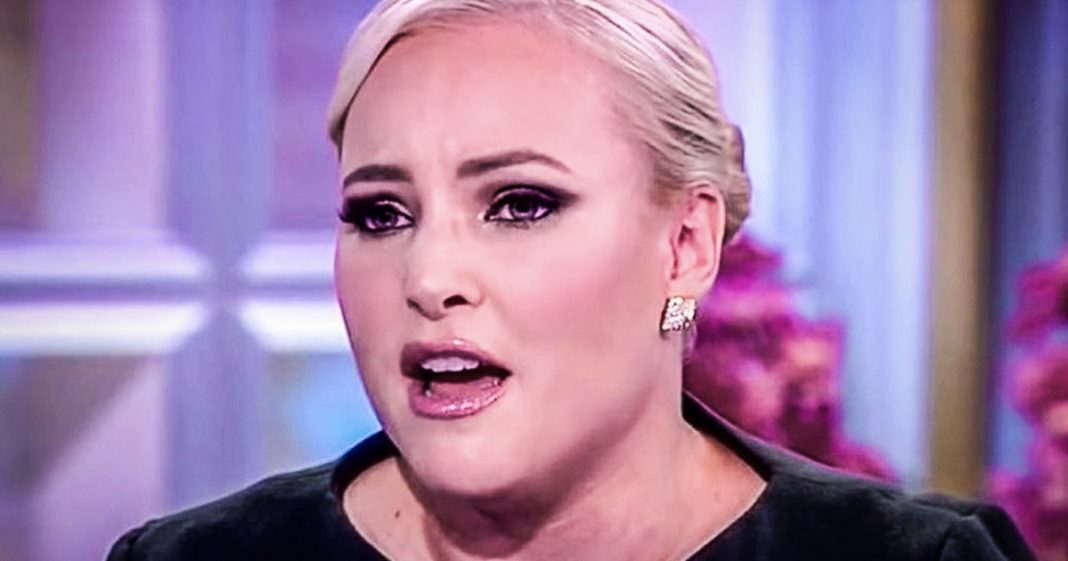 The View’s Meghan McCain has been getting praise for her epic “clap back” to Donald Trump’s attacks on her father. Trump has never been shy about attacking McCain or anyone else for that matter, but Meghan has a history of supporting the President’s policies and backs the Party that unapologetically supports Trump. She is enabling this through her continued support for the Republican Party. Ring of Fire’s Farron Cousins discusses this.

For a very long time. I have held my tongue about Meghan McCain. You know, we have seen clips, uh, other people have done videos about them. I’ve heard you saying the most insanely stupid things imaginable on the view. Then this past weekend, Donald Trump came out yet again and attacked her father, former senator John McCain, who passed away not that long ago. He, uh, mentioned that McCain was last in his class, uh, in the military at the academy. He attacked his honor and credibility all because McCain wanted to get the, uh, Christopher Steele dossier to the public. He’s felt that was important. It was a good thing McCain did too, by the way. But in his assessment of McCain not being a good student at the Naval Academy, that is actually correct.

If you go back and you look at McCain’s record and you’ve read about his history, that that’s not a lie. It was a stupid attack to make on a dead guy for no apparent reason. Just cause you’re a bully and Trump shouldn’t have done that. There was no reason to. But then Meghan McCain came out, defended her, father’s on her as she should, and she got all kinds of praise online for her epic clap backs. Every toe is epic. Clap back. I got tired of hearing the phrase epic clap back. I hate even saying it, but here’s my thing and this is why I’m finally choosing to talk about Meghan McCain. She enables this, you know, she goes out there and she gets pissed off when Donald Trump attacks her father. Rightfully so. I would be furious if anybody did that to any member of my family. And then she goes back on the view. She defends his policies, excuse back on the view and she defends the Republican Party. She tows the Republican Party line. She spouts out Republican Party talking points and the Republican Party led by Ronna Romney McDaniel.

Okay, is the one who supports Donald Trump. So Meghan McCain supports the party that supports the man that attacks her dead father. She’s enabling this.

Think about it this way. If you had a parent the passed away or or any member of your family, how they don’t even have to be passed away, but if there was a group you were a part of that just started launching all this criticism and attacks on a family member of yours, would you stay a part of that organization? Would you continue to support the organization? No, you wouldn’t. No sane, rational person would do that. No person who genuinely cared about their family members would stay. A part of the Meghan McCain is she continues to remain a republican even though she didn’t start her life out as a Republican in case you were unclear about that. Go go look at her history. She used to be a democrat. You used to believe in all these democratic ideals, only changed her affiliation when her father decided to run for president and now she sold her soul like so many others to the Republican party, just so she could have that cushy little job at the view that she is grossly unqualified. The hold, I am sorry that her father died, and I do not believe that now after his death is the time to go out and personally attack him. What needed to be said about John McCain was pretty much said when he was running for president in 2008 there’s no need to rehash it anymore.

Okay. But by staying with the Republican Party, by defending them, defending their policies and saying what they want her to say, she is tacitly giving support to the man who continues to denigrate her deceased father. She is an n a blur. And in that sense, I do not feel sorry for her because she at this point, is now choosing to remain a part of the group that throws their undying support behind Donald Trump. She owns this now.