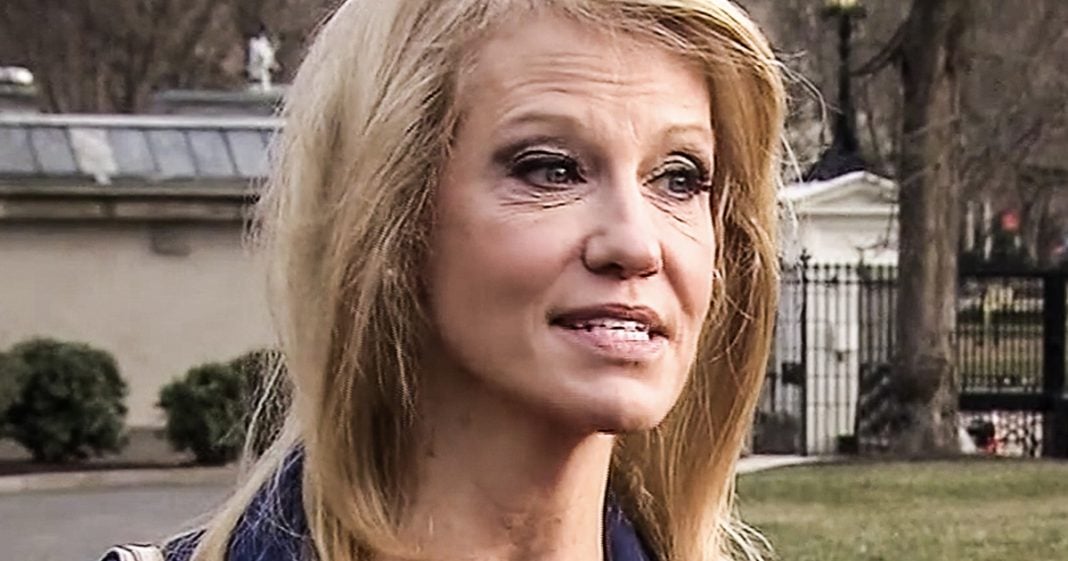 On Monday, Kellyanne Conway’s husband George warned the country again that Donald Trump is mentally unstable, and he even cited the DSM to back up his claims. Kellyanne arrived at the White House shortly afterwards where she told reporters that she disagrees with her husband’s assessment, and that Trump is perfectly fine. She’s wrong, and all those who agree with her are wrong, too. Ring of Fire’s Farron Cousins discusses this.

I have to imagine that things are probably pretty awkward in the Conway Household, uh, between Kellyanne and her husband, George, because on the one hand you have Kellyanne Conway who is Donald Trump’s number one confidant and the chief liar of this administration. And on the other you have George Conway, Kellyanne’s husband who is repeatedly been warning us on Twitter for the last week or so that Donald Trump is mentally unstable and we really need to be concerned about his mental state. On Monday, George Conway decided to step it up a notch on Twitter and he started posting snippets from the Dsm, which is what mental health professionals use as their guidelines to diagnose mental illnesses. He posted two different pages from the book that essentially, even though they’re just diagnostic criteria, they, they read basically like a excerpt of Donald Trump’s auto biography. They fit him that well. They were narcissistic personality disorder and antisocial personality disorder.

So while George Conway is out there warning us and showing us the evidence, like here it is, here’s the criteria. This man fits it. Why doesn’t anybody care? While he’s doing that, Kellyanne Conway shows up at the White House. There’s reporters out there and she talks to them and they say, Hey, your, your husband’s kind of a telling us that your boss is crazy. You care to comment. And she says, I don’t share his concerns about the president. I just don’t, I don’t share his concern. I don’t think the president’s a nutjob is what she’s telling us. And then she went on to say, know I was busy getting the kids out this morning and you know, rushing into work. So maybe the situation’s changed since I left the house. So obviously by her statement there, she knew that George Conway is sitting there on Twitter, like just blasting her boss and then she’s a, how do I get to get the kids to school?

I gotta go, I’ll deal with this later. Well, she did actually have to deal with it later because her boss Donald Trump was pretty pissed off. So he gets on Twitter, starts to bully George Conway, calling him quote a total loser. And this is where we are right now. Kellyanne Conway, honest to God, I almost feel a little bit of sense sympathy for at this point, just a little, not much, not enough to make me like her, but still she has to go to work and to deal with is not job. And then she asked to go home and hear from her husband about what a nut job she’s working for. That can’t be a comfortable situation. That’s got to create a lot of awkward tension in the Conway household and in the White House. But I think my sympathy is already actually run out for Kellyanne Conway because she 100% deserves this.

She has decided to stick by this man. She has decided to defend this man and she has decided to ruin any credibility she may have had by continuously going on television and lying on behalf of Donald Trump. Her husband is correct. Donald Trump is not well. We need to take this seriously and as Conway George Conway pointed out last week, we need to look into this more than just attacking it on Twitter or attacking it on social media. We actually need inquiries. We need evaluations. We need experts to determine whether or not this man is mentally fit to be president of the United States because based on all the evidence he’s presented us with, he sure as hell isn’t up to the job, at least mentally. And that’s the guy that Kellyanne continues to defend while denying that there’s anything wrong with how his brain is functioning.