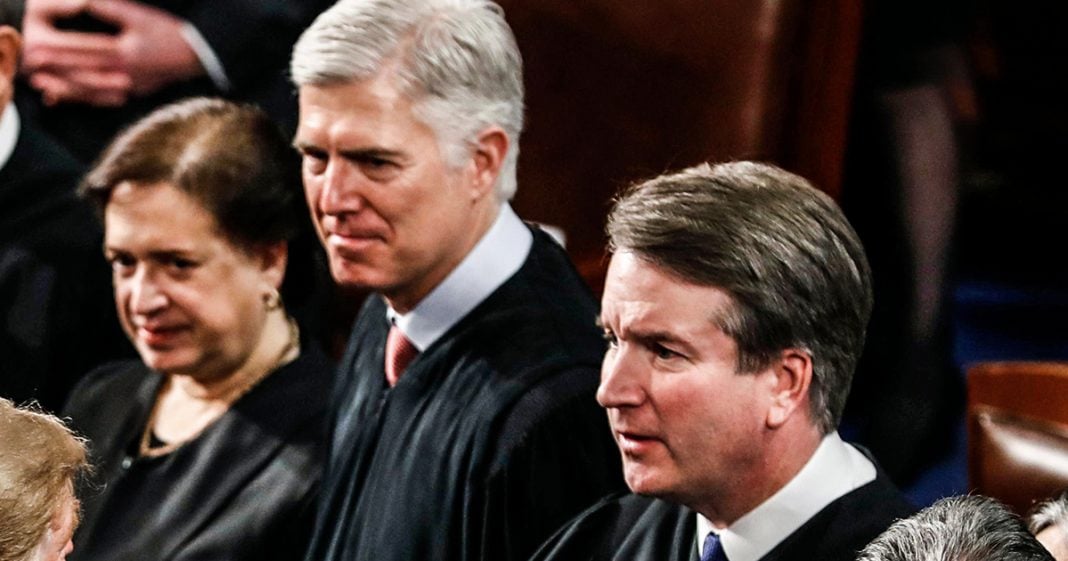 More and more Democrats are warming up to expanding the number of seats on the Supreme Court in order to counter the Republicans’ efforts to pack the court with right wing partisan judges. But the truth is that this won’t fix the problem. In fact, it won’t even come close to fixing the problem. Democrats have let Republicans destroy the court system for decades and a few more seats on SCOTUS isn’t going to undo that damage, as Ring of Fire’s Farron Cousins explains.

Democrats running for president in 2020 are all kind of starting to warm up to the idea that Eric Holder throughout a couple of weeks ago and that is that we should expand the number of seats on the US Supreme Court to fight back against the Republican’s packing that one court in particular. Here’s what pisses me off about this story and to be honest, this idea is a story from politico talking about this. Let me read you the first line of this article and you can find a link to it in the description. This video, this first line here, after watching Mitch McConnell transformed the judiciary over the last four years, liberals are demanding a bold response over the last four years. Is that how long you people have been paying attention to the judiciary? Has It only been four years? Really? Do you not know about the existence of the Powell memo? Do you not know? Have you not been paying attention to what Republicans have been doing since the 1970s yeah, I’m pissed off right now. Four years. You idiots think they’ve been packing the courts. They’ve been doing it for 50 they have remade every single district court in the United States district courts that by the way, here’s 7,000 cases a year and about 6,850 of those 7,000 are decided at that level. That’s the end. That’s the end.

Okay. Supreme Court gets about a hundred to 150 cases a year. Okay, and you want to sit there and tell us all the problems, the supreme court, we should add a couple more seats, you know as political payback. Look, I agree. The Republicans have put some really horrible human beings on the court, most of whom do not belong there. I get it. I’m not disagreeing with you on that, but do you think adding a couple more seats is going to solve anything? No, because we’re still going to be left with hundreds of courts in this country that are packed with right wing ideologues who are going to consistently rule for corporations over consumers and continue to erode our civil rights. That’s what they want to do and that’s what they are doing and that’s what they’ve been doing since the 70s not just for the past four years. Here’s the other thing about just adding some seats to the Supreme Court. You know what’s going to happen if we do that as Democrats, the Republicans are just going to come back later and just add some more and repack those and then I guess the next Democrats going to have to add more seats. Where does it end?

Okay, where does it end? Tell me honestly, because you think Republicans aren’t going to pay us back. We add two more seats. They’re going to add 10 this is a dumb idea. It is not well thought out and it is a silly talking point to placate the liberal base that doesn’t understand how badly our court system is screwed up in the United States. There is a solution. This would require a change to the constitution, so it is more difficult than adding seats to the Supreme Court, which is a bandaid that will quickly be ripped off by the way. But the solution is term limits. Trump has put people on the bench for lifetime appointments that are in their thirties folks, their thirties Ruth Bader Ginsburg’s 86 years old, sitting on the u s supreme court. So some of these appointments, one of whom at least as 36 years old, she’s got 50 more years to be a right wing corporate hack on a district court. One out of six district judges in the United States today are Donald Trump appointees, one out of six. And you want to bitch and Moan about four years of Supreme Court now, open your eyes, widen your gaze, and pay attention to the damage that Republicans have done to the entire court system over the last 50 years. This is not just about the supreme court. This is about quite literally every court in this country, and it’s been going on for a lot more than just four years.