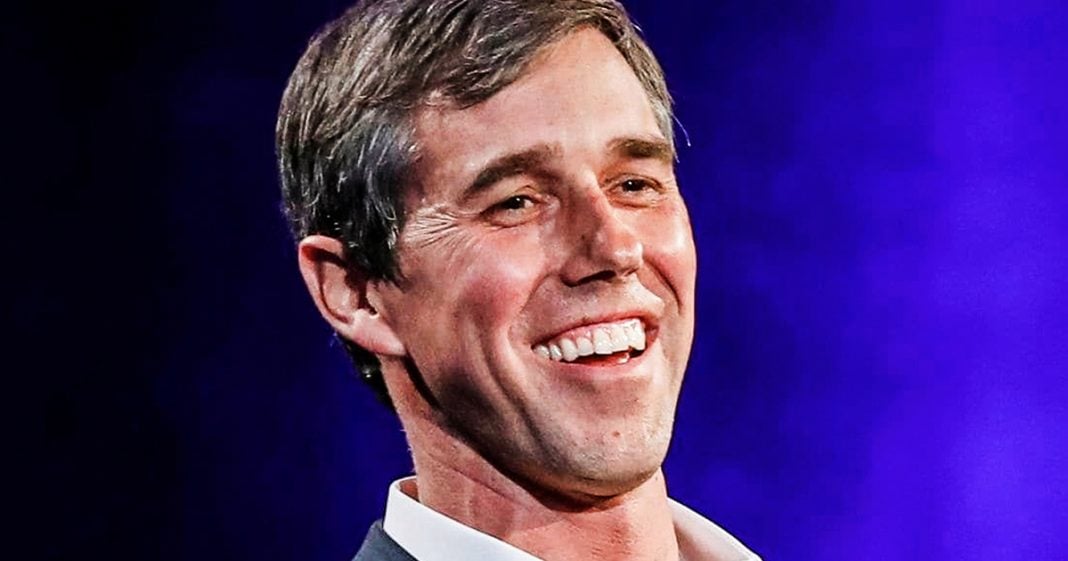 Beto O’Rourke now holds the title of biggest opening day fundraising numbers out of all the Democratic candidates. But in a weird twist, he refuses to tell us where the money came from. This has led to rampant speculation of bundlers and corporations padding his numbers, and we won’t know the truth until he has to release his financial statements at the end of the quarter. Ring of Fire’s Farron Cousins explains what’s happening.

Well folks, the numbers are out and Beto O’Rourke now holds the title of the top single day opening day donations, I guess out of any of the Democrats running for president right now. He talked six point $1 million in the 24 hour period following his announcement that he is running for president six point $1 million. So he beat Bernie’s total and he is now the 24 hour leader in money. There’s just one problem. You know, Bernie told us how many people donated. They told us what the average campaign contribution was. It was $27 Beto refuses to tell us. He said I could, but I’m choosing not to that. That’s not okay.

Yeah, we, we should know those things, right? I, this is a guy who just a couple months ago was getting popped for taking that no fossil fuel pledge. And then it turns out he was getting a lot of money from people who work in the fossil fuel industry, both employees, which is okay, but also from the top brass executives to so eh, it makes it a little more iffy and now he won’t tell us where the money came from. Now I am not saying at all because I don’t know that this money came from corporations or came from the wealthy elite or came from whoever we don’t know. And that’s the problem though, is that right now there is a lot of speculation out there. There’s people making some wild claims on Twitter that maybe this is some kind of DNC money laundering thing. All right, back up folks. I am not a member of the Beto O’Rourke fan club.

Okay. I wanted him to beat Ted Cruz. He was unable to do it and he’s now running for president, has not given us a position on anything. And I actually have talked about that on Twitter and people said we’re just give them time. A lot of the candidates didn’t have platforms on their website when they started running. Oh, you mean the people who started running two months ago? Yeah. Beto O’Rourke has been teasing us for three months about whether or not he’s going to run. You would think he would have time to maybe say, Hey, I stand for this instead. All these done is one, stand on countertops for some reason, like some Weirdo and to tell us what he’s not for, which is, you know, universal healthcare, medicare for all. Uh, he told us this past weekend, Hey, if you like your ar 15, you can keep it.

We’re not going to confiscate those. Just just use it responsibly. It’s a weapon of war designed to kill as many people as possible in as short of a time as possible. And you want them to use that responsibly. Doesn’t make a lot of sense. But I understand you’re trying to placate the gun. Crazy crowd. You have no positions Beto you have no policies, you have no platform, you have no plans. And that’s what’s driving me crazy about this. I don’t get better. Romania. It doesn’t make any sense other than it is a cult of personality. That’s all this is. And why God didn’t even have that great of a personality. We have lots of very serious people running for president who aren’t doing it because they think they’re the coolest. They’re doing it because they want to fix the problems and you know what? They all have plans.

Cory Booker, you know as core participants, he’s been, he’s got plans that are actually pretty damn progressive. Elizabeth Warren, who did a town hall on CNN last night, laid out plan after plan after plan, not just ideas, actual plants when it comes to being prepared and knowing what she wants to do and how she’s going to do it. Elizabeth Warren is number one in this crop of Democratic candidates. Bernie Sanders, he has plans, he has ideas, he has proposals. He has put forward legislation. He knows what the hell he’s doing and he knows how to do it. Tulsi Gabbard lover or hater. Her website is filled with plants. Andrew Yang, tons of plans. Boot edge, edge. He has plans. Do you see where I’m going with this? Beto O’Rourke has offered us nothing yet. Now he holds the single day fundraising record for the first 24 hours and people are loving him. I don’t hate him by any stretch of the imagination, and if he is the only viable alternative in November of 2020 to defeat Trump, I will vote for him. I will. But until then, I want to know what the hell the guy stands for instead of just seeing pictures of what the guy stands on. I don’t think that’s too much to ask for somebody who wants to be president.