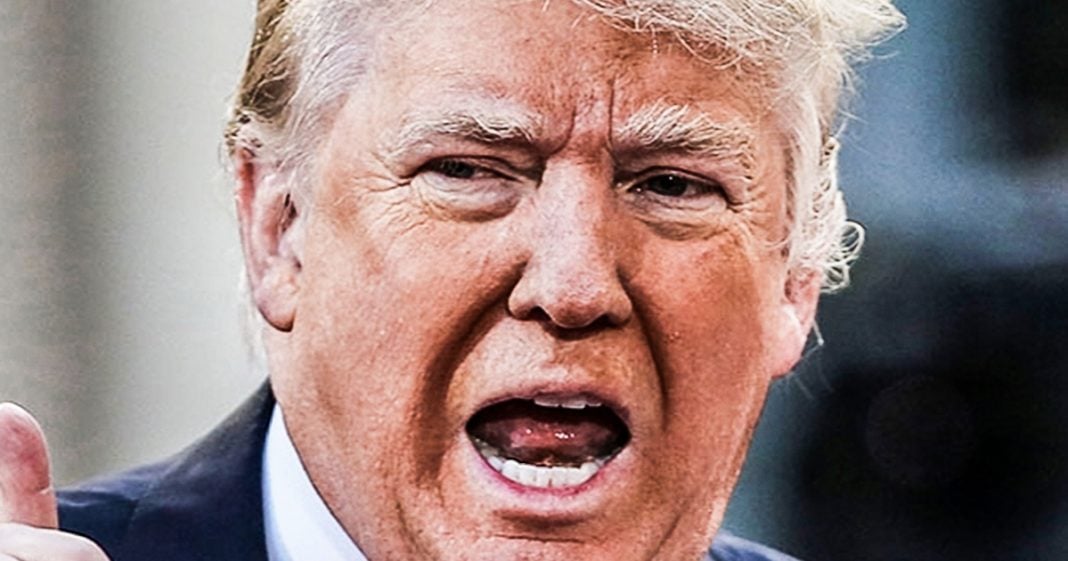 Donald Trump went on a delusional Twitter rant on Sunday, railing on everything from Saturday Night Live to the Mueller probe, but in the midst of all of this, he took some time to complain that some of Fox News’ weekend hosts aren’t being nice to him. Ring of Fire’s Farron Cousins discusses Trump’s Twitter meltdown and his dangerous obsession with Fox News.

Over the weekend. In fact, really just on Sunday, Donald Trump went on a tear on Twitter complaining about everything from Saturday night live to late night comedy, host of Robert Mueller to the Democrats, to the witch hunts, to the Fox News not airing, Jeanine Pirro show this weekend. But to me, one of the tweets, the kind of really stuck out like a sore thumb was this tweet right here. We’re at Fox News weekend. Anchors are full. Neville and Leland Vitor trained by CNN prior to their writings collapse. In any event, that’s where they should be working along with their lowest rated anchor. Shepard Smith. This one tweet Donald Trump sent out tells us a lot about this man’s mental state. First and foremost, the two anchors that he’s talking about. Arthel, uh, RFL Neville and Leland Vitor, they weren’t completely kind to Donald Trump this weekend. They did the typical, uh, which we’ve seen on Fox News a few times. They weren’t awful to him.

They weren’t like, Oh man, this guy sucks. This guy’s going down. They weren’t being honest. It would just wasn’t a complete puff piece on the president. And so he got furious and compared them to Shepard Smith who will also hold the president accountable when the president needs to be held accountable, which is all the time in Shepard. Smith isn’t afraid to do it and neither were these two hosts this past weekend and Trump flipped out. He flipped out that anyone on that network had the audacity to not just lavish praise upon him and he says, go to CNN. That’s where you belonged. CNN mean to me, Fox News is supposed to be nice, so you leave the nice people and you go sit with the main people because you’re being too mean to me. It’s not funny. It’s really not.

Donald Trump, not just with this tweet, but with the entire Sunday of tweets showed us and many other folks on Twitter have already been saying this for the last 24 hours. They showed us that he’s not well. They showed us that he’s not right. They showed us that there is something wrong inside of him and that’s not a personal attack on him. People in this country do have mental illnesses. It’s just that a lot of them do seek help. They recognize the warning signs or more importantly, they’re surrounded by a support system that encourages them and helps them and gets them the help that they need. Trump doesn’t have that. There is nobody in his life willing to stand up to them and say, hey man, everything okay? Do you need to talk? Do you need something? Do you, do you want to go see somebody’s decision? Normal? Your behavior is concerning to us and we would like to get you help, but we can’t if you won’t let us at this point, every republican out there,

Okay, who is complicit, who doesn’t speak out against it? You own this as well, and I think that says a lot more about you than it does about Donald Trump in 20 years from now, if that long, we’re going to see documentaries, you know retrospectives about the Trump presidency, it, all of the historians of that time, all of the political analysts, they’re going to say that there was clearly some form of mental illness happening with this president. It’s just at the time we couldn’t see it. I guarantee you mark my words in 20 years, there will be someone on one of those retrospectives saying, at the time, we just didn’t see the warning signs. No. The warning signs are the last 24 hours of Donald Trump’s Twitter feed, and it doesn’t even matter when you’re watching this. If you’re watching this a week from now. Yeah, the last 24 hours of Trump’s fitter Twitter feed, I guarantee you they’re going to be pretty frigging crazy.

Okay? The man needs help. He doesn’t need sick offense and yes, men telling him that he is wonderful and great, but that’s why he watches Fox News. That’s why he gets mad when you have a couple of hosts who have to call them out for being crazy.