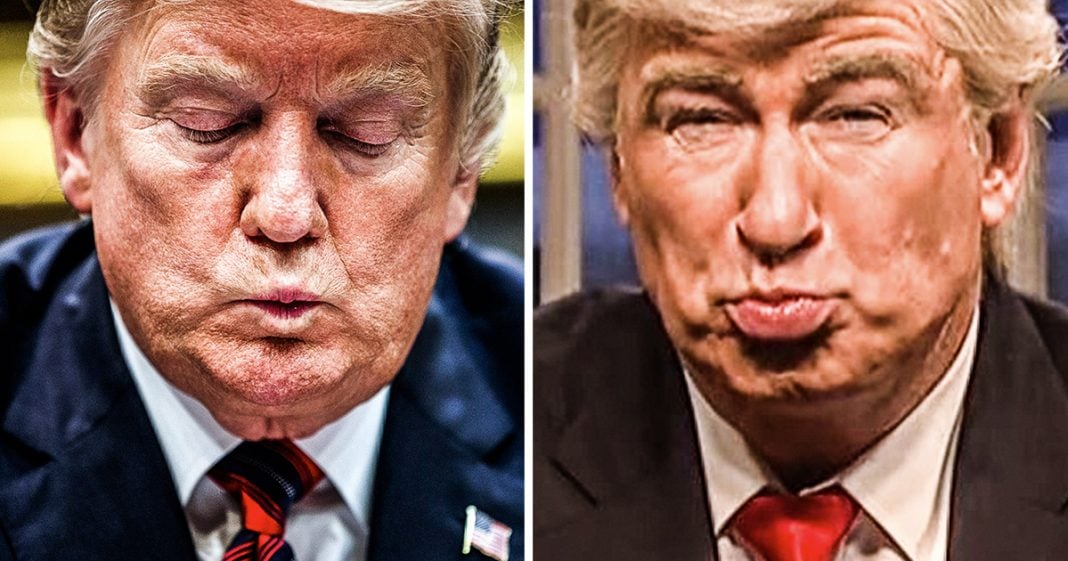 Donald Trump doesn’t have a care in the world, other than late night comedy shows being mean to him. Imagine being the President of the United States and your biggest concern is what people are saying about you on comedy shows. This man isn’t well, and he should be focusing on things that actually matter for this country, but his vanity is preventing him from being able to serve in his position. Ring of Fire’s Farron Cousins discusses this.

Poor Donald Trump just cannot catch a break. Every time he turns on his TV, there’s somebody there making fun of him, whether it’s Saturday Night Live, maybe it’s Jimmy Kimmel, maybe it’s Steven Colbert, but it’s just always dog in on this president. And this past weekend was no exception, even though Saturday Night Live ran a rerun and Donald Trump got super mad about it. So Sunday morning Donald Trump takes to Twitter and in the midst of a massive Twitter tirade, Twitter Tantrum, really, he tweeted out the following two part tweet about how pissed he is at Saturday Night Live and other late night comedy shows. Here it is. It’s truly incredible. That shows like Saturday Night Live, not funny slash no talent can spend all of their time knocking the same person, me over and over without so much of a mention of the other side, like an advertisement without consequences. Same with late night shows.

Should Federal Election Commission fee commission and or FCC look into this. There must be collusion with the Democrats and of course Russia. Such one sided media coverage. Most of it. Fake News, hard to believe. I won and am winning approval rating 52% 93% with Republicans. Sorry, Hashtag Maga um, wow. That’s a lot to take in right from his insane tweet. Um, okay. So first let’s start with the obvious. He’s, he’s mad that they make fun of him. Dude, if you don’t want to be made fun of, don’t be in a position of power. Don’t be a high profile human being. It’s literally happened to every president before you. It’s going to happen to every single one after you. It’s what they do. Late night comedians made fun of Obama, even if they did support him because it was timely and topical and funny. I laughed at jokes making fun of Obama, even though I had supported him.

Get a grip and lighten up. You want an investigation in the what? This isn’t, you know, a news debate. Plus even if it were, we don’t have the fairness doctrine anymore. You can thank your savior, Ronald Reagan for that. So there is no requirement to air the other side as you say. But if you’re going to start calling from media outlets to air both sides of something, you better be careful because that’s really going to destroy Fox News. The other thing, collusion, Donald Trump in this tweet that I just read you, he thinks that Saturday Night Live and and Kimmel and Colbert and Samantha Bee and all these people, they must be colluding not only with the Democrats but with Russia, so now it’s the Democrats colluding with Russia. My God. Is there anything that Russia doesn’t have their hands in right now? They’re just colluding with Republicans and Democrats and late night comedians and Saturday Night Live.

Oh my God, they must be very, very busy. This is insanity. By the way, this is insanity. Russia is not pulling the strings on Saturday Night Live at least I don’t think. Then hard to believe I won an am winning approval, 52% first of all, your approval rate, he’s not 52% it’s in the low to mid forties which you’re siding is a conservative poll that is consistently ranked you a little bit higher, but you take the composite and you still in the low to middle forties so you don’t even have half the country supporting you right now. Yeah, you’ve got 93% of Republicans who were polled become on. Even W had numbers higher than that. This is all pathetic. It’s all insane. We have a president who’s mad that people are making fun of him. I mean hell, Obama should have told him first thing when he walked in the Oval Office, Hey, be where people are gonna make fun of every single thing you do.

So don’t do anything overtly stupid to give them fodder. But I guess that message wasn’t conveyed and Trump at every possible turn does something stupid or does something crazy or does something that is worthy of people mocking him for, because maybe one day he’s going to get tired of the mocking and rather than lash out and try to regulate SNL, he may say to himself, you know what? Maybe the problem is me. But I don’t think that day will ever come because Donald Trump’s narcissism won’t allow him to think for a second that he might actually be the problem.