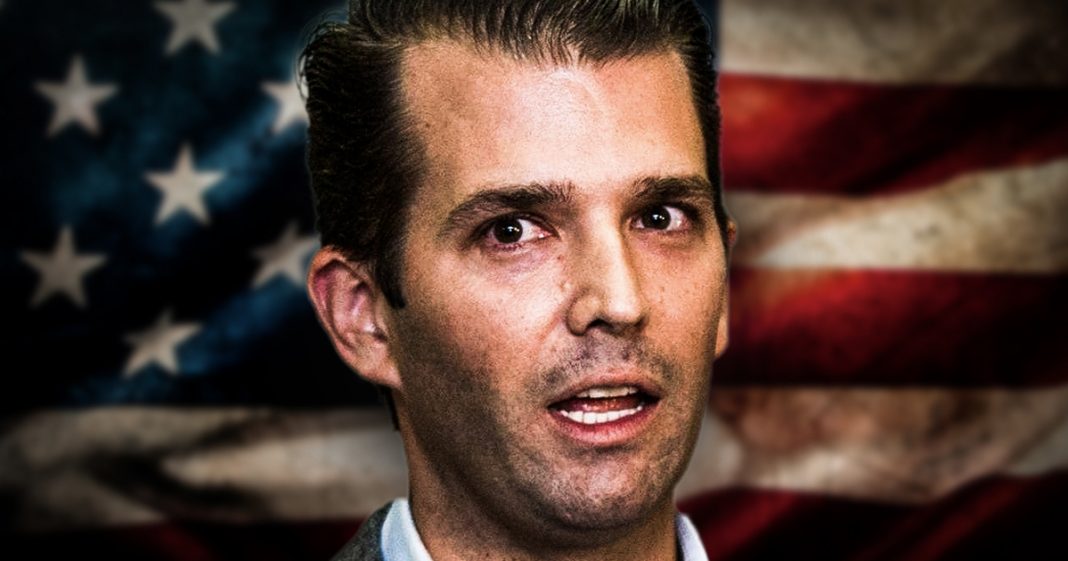 According to reports, Donald Trump, Jr. has very strong political ambitions, and Republican strategists believe that his fundraising abilities and high profile are helping him prepare for a future presidential run. Is his father just the beginning of the “Trump Dynasty,” or is he a one-shot President that will go down in history as America’s worst decision of the 21st Century? Ring of Fire’s Farron Cousins discusses this.

According to reports, Donald Trump Jr. is actually being groomed as a potential candidate for the 2024 presidential elections because everybody on the right assumes that Donald Trump is going to be in office until 2024. So the earliest that junior could run would be in 2024. Now, these reports have actually been going on for months and even Trump, Jr. himself has retweeted people asking him to run for president. Uh, you’ve had the folks at Fox News trying to tell him, you’ll, you’ll be a great president someday should you choose to go that route. We’ll recently, Eric Trump gave an interview to the Times of London where Eric said, I have no political ambitions, but I think don Jr., you know, he, he’s got some ambitions. He may be the guy. And, uh, they asked him if this could be the beginning of a Trump family dynasty. And Eric Trump said, oh, sure. Other Republican strategists have said that.

Yeah. Donald Trump Jr. does a great job out there. Fundraising. Uh, he goes in campaigns for people. He’s really helping a lot. He’s raising his own profile, so. Sure. Let’s have him run in 2024 let’s create that Trump political dynasty because yeah, the first two years of first Trump have just been phenomenal, right? I mean, yeah. Even though real income is back down to the levels, it was in 1974 millionaires and billionaires are doing great, and by the way, just so everybody’s clear on this, when you see people talking about wage increases, like Oh, real wages grew by 2.4% or 2.1% whatever it is, keep in mind that that’s also factoring in how much the wealthy folks are. Pull it in. So as CEO gets a massive raise, a massive bonus, a couple million dollars, that skews those numbers up upwards. The real median income here in the United States is back to the levels it was in 1974 so don’t be fooled by those stupid numbers and don’t be fooled by Donald Trump’s talking points that he’s actually doing great for the economy.

This is an economy built of Straw that will eventually come crashing down as most economists are already predicting it’s going to. But Trump Jr. has nothing to offer. You know, at least Donald Trump after his small loan of $1 million, he did build something. Even though most of it has come crashing down and there’s pretty good evidence that a lot of it was built on tax fraud. He still built something which has more than you can say about Trump. Jr. Trump junior doesn’t have the same, I’m going to beat you up persona that Donald Trump’s senior has. And a lot of people gravitated towards that for some reason. You know, their, their own fragile masculinity, which is what you know, researchers have said, made them grasp onto Trump who they thought was the embodiment of what a man should be. Trump junior doesn’t have that. Trump junior doesn’t have anything that his father had.

He’s not a good businessman. Neither is senior. But you know, he’s not a good con man. He’s not good at lying. He can’t handle pressure. Neither can his father. But all of the bad traits about senior are so much more amplified in junior. So here’s what I have to say. Hell yeah. I want Donald Trump Jr. to run for president in 2024 because all of the manipulative traits that his father has that helped to get him elected in 2016 are absent in junior. But to be honest, if you really wanted to be the Alpha, what you should do is primary your father primary him for 2020 usurp that throne. Show Him who’s boss. Otherwise, you’re really just bowing down to the man showing how weak you really are.