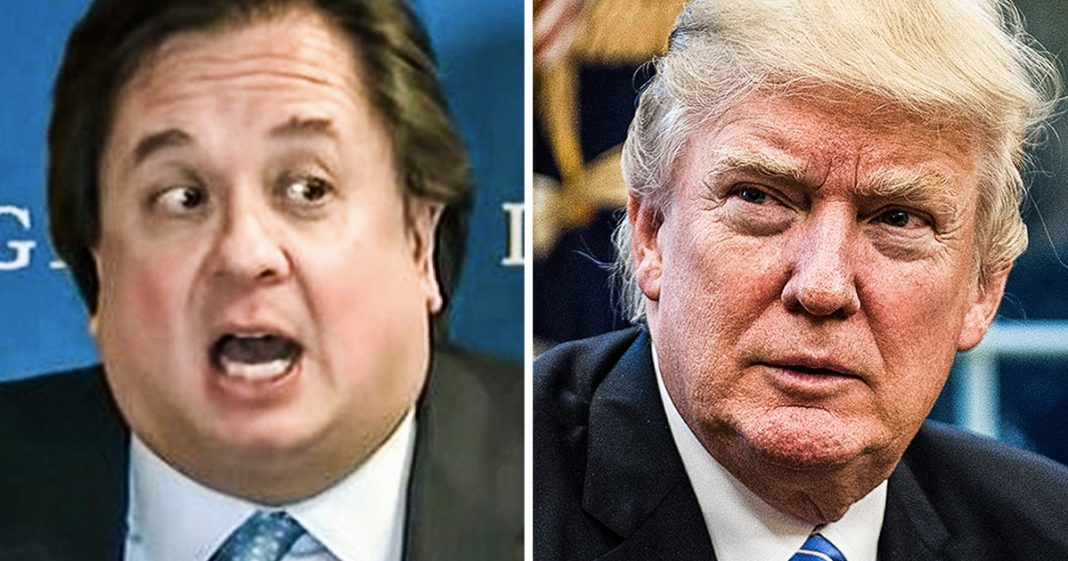 During a glorious Twitter tirade earlier this week, George Conway, the husband of White House counselor Kellyanne Conway, called for a “serious inquiry” into Donald Trump’s mental state. Apparently what set Mr. Conway off was Trump’s claim that the judge in the Manafort case “completely exonerated” Trump on the issue of collusion, when the judge actually did the exact opposite. George isn’t playing anymore, and he wants the country to take the issue of Trump’s failing mental health seriously. Ring of Fire’s Farron Cousins explains why we need to listen to what George Conway has to say, at least in this one instance.

George Conway, the Republican lawyer, husband of White House counselor. Kellyanne Conway took to Twitter this week in what I really do consider to be a glorious Twitter tirade because I loved it. Were he called for a serious inquiry into Donald Trump’s mental health? What started all of this? Was Donald Trump tweeting out a video, I guess, um, of him talking. Shortly after the Manafort, a verdict came down and he got sentenced to more time in prison, but Trump claimed and that video that the judge said there was no collusion, that that Trump did not collude with any foreign countries at all, and that that’s total bunk. It’s a witch hunt. She never said any of that. What she said was that when Manafort’s lawyers were trying to argue that there was no collusion, she said, that’s irrelevant. We’re not here to talk about that at all. Stop talking. I don’t care.

Those weren’t her exact words, but that is the message that she sent Trump claims that those comments saying that’s irrelevant. We’re not talking about that means that he was exonerated and George Conway, again, he’s a lawyer, knows that. Yeah. Not only is that not true what you’re saying Mr. Trump, but clearly there’s something wrong with you because all you do is lie. Here’s a sampling of just some of the tweets he sent here. It says, have we ever seen this degree of brazen, pathological mendacity and American public life? You know, he denies what the world can see on videotape, even as donors and supporters wonder what is wrong with him? Why would he feel compelled or why would he be feel compelled to tell such an absurd lie? At that point, he’s talking about the Tim Apple, Tim Cook, Apple, Tim Apple Video, where Trump has repeatedly changed his story about what he said, and it was a nonissue from the start.

Who Cares? But your constant lies and the changing of the story to make yourself look better. You made it an issue. You Moron. But one lie on any subject is never enough for Donald Trump. Conway continues, so he next tells a different lie. Yes, I omitted a word, but to save time, a ridiculous assertion. Of course he really said Tim Apple instead of Tim Cook Apple to save a third of a second. This man who recently gave an incoherent rambling two hour plus speech, this man not known for economy of words, another absurd, crazy lie pathological, and now another one, and yet he lies again, a blatant lie again, pathological. And it’s not rational because it’s a lie that no reasonable person would believe. It undermines his credibility. It’s self defeating. Here’s the thing, and George Conway in his assessment, and I do not agree with his political stances at all, but I agree with everything he’s saying right here.

And he does later go on to say that it’s nuts. It’s a disorder. That’s how he ends it. It’s nuts. It’s a disorder, but the lies are unnecessary. And that’s what makes us think he has a disorder. Because it’s one thing to go out there and tell everybody that the tax cuts are working. Yo, a political lie, still a lie, but let’s be honest. 99.9% of politicians throughout history do that. They tell you their policies are better than they are. They lie to you about the effects, but that’s a lie for personal gain. So you’ll support them lying about the Tim Apple thing, lying about what this judge said. There’s no benefit in that for you. Maybe with what the judge said, I guess, but the Tim Apple thing, you got no benefit from lying about that, except people thinking like, wow, may maybe this guy is nuts. He’s nuts. Donald Trump is nuts. The lies are insane. This is getting crazier by the day at this point. And George Conway is 100% correct. We need some kind of serious inquiry to find out if this man is even mentally stable enough to sit in the White House. My guests, and I’m assuming George Conway’s guests as well, is that he’s not.