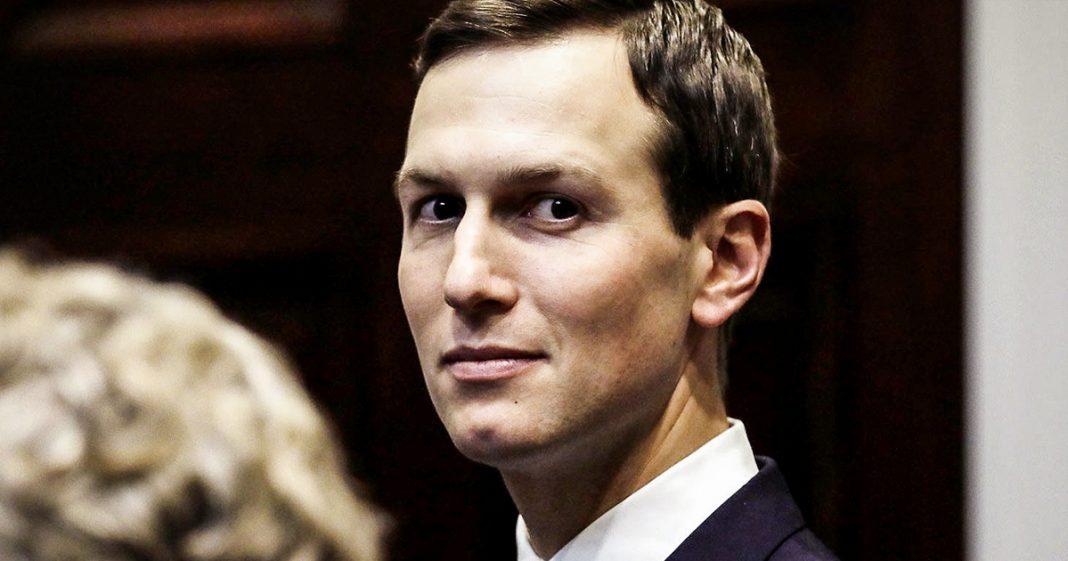 Jared Kushner isn’t the sharpest knife in the drawer, and his tendency to screw up everything he touches – from real estate to the White House – is evidence of that. So the recent college admission scandal that roped in the wealthy elite and Hollywood stars has re-awakened questions about how this guy managed to get into Harvard. Apparently this issue has already been investigated, and it certainly appears that there was some kind of pay-to-play involved, as Ring of Fire’s Farron Cousins explains.

So obviously one of the biggest stories this week that grabbed headlines The world over was the college admissions scandal. You know, you had actresses, you had Lori Laughlin, you had to Felicity Huffman, you had Laughlin’s husband, the Masa, Moe guy. They were taken down, CEOs are taken down, college coaches were taken down, all because they were paying these essentially bribes to some universities, to some coaches to inflate their child’s athletic ability on paper to get them into good schools. And some of them were using this fraudulent testing center that would basically pay and have smart kids either come in and take the sat for your dumb kid or sit next to them and help give them the answers so they could get into a better school with better test scores. All of this, which is a massive scandal and I believe it’s probably going to go deeper than we’ve even seen so far.

But all of this has raised a lot of questions because some of the people out there mocking these actresses and the CEO’s happened to be members of the Trump family. So what did everybody in this country do? They started asking, well, wait a minute, how did you get into college? How did you get into an Ivy League school? You’re all idiots. And we can see that every day. So what happened? Well, luckily the case of Jared Kushner, who went to Harvard, that was actually investigated back in 2006 by an author, uh, from Propublica. They looked into this and it turns out that Jared Kushner may have very well benefited from some kind of pay to play at mission scam perpetrated by his father. Now, I’m not suggesting that anything illegal happened, but I am saying what the report said back then, which is that 1998 you had Charles Kushner Jared’s daddy gave a ton, couple million, to Harvard, a school that Charles Kushner didn’t even go to.

So it’s not like he was just giving money to his alma mater, gives them a few million dollars, and then wouldn’t you know what, a month or two later, Jared Kushner gets his acceptance letter, even though according to interviews, his high school buddies and classmates said that, wow, how do you get into Harvard? He wasn’t a good student. He didn’t really do anything to excel and that was at a time when one out of nine applicants could get in. So eight out of nine were rejected. So how the hell did this more on get into Harvard? Well, I think the two and a half million dollar donation that daddy made played a big role in that and it gets a little more interesting according to the author, because Harvard would always publicize when they got big multimillion dollar donations. But they didn’t do it for Kushner’s. They didn’t put out a press release. They didn’t say, we just got this great endowment, we just got a huge donation. This is the one that they kept quiet.

Yeah. Now that seems a little odd to me and it also makes it appear more likely that Jared Kushner only got into an ivy league school because daddy paid his way. Of course, that’s, you know, before daddy went to prison for witness tampering and making illegal campaign donations, which happened in 2005 oh also tax evasion. But Jared Kushner has shown us, he shows us every time he speaks, every time he does anything. Anytime a news story comes out about him, he’s not a smart guy. He just isn’t.

So how did he get into such a prestigious school? Well, the answer is pretty simple and it’s pretty simple for a lot of people in this country that you know, left, right center and everything in between. If you’ve got wealthy parents, they can buy you access to anything. And that’s the biggest problem with the United States today. There is no merit anymore. It doesn’t matter how smart you are, it doesn’t matter how great your ideas are or how hard of a worker you are. The people who were born into money are always going to have the advantage. That doesn’t mean that there aren’t opportunities for the rest of us. There are, but we have to work 10 times harder than these trust fund inheritance babies who’ve gone through life having everything handed to them, even though there were far more qualified people in this country to take those spots.

There are probably millions of people in this country who could have taken Jared Kushner spot at Harvard and made something better out of their lives than what that scumbag was able to do with his real estate scams. And now with his fraudulent security clearance, meeting with world leaders as some kind of White House advisor. Jared Kushner doesn’t deserve to be in the White House. He doesn’t deserve anything that he has. And the only reason he has it is because his former felon father was able to give a prestigious college millions of dollars. Just think of the advantages the rest of us in this country would have if our parents could have written big checks to prestigious universities.