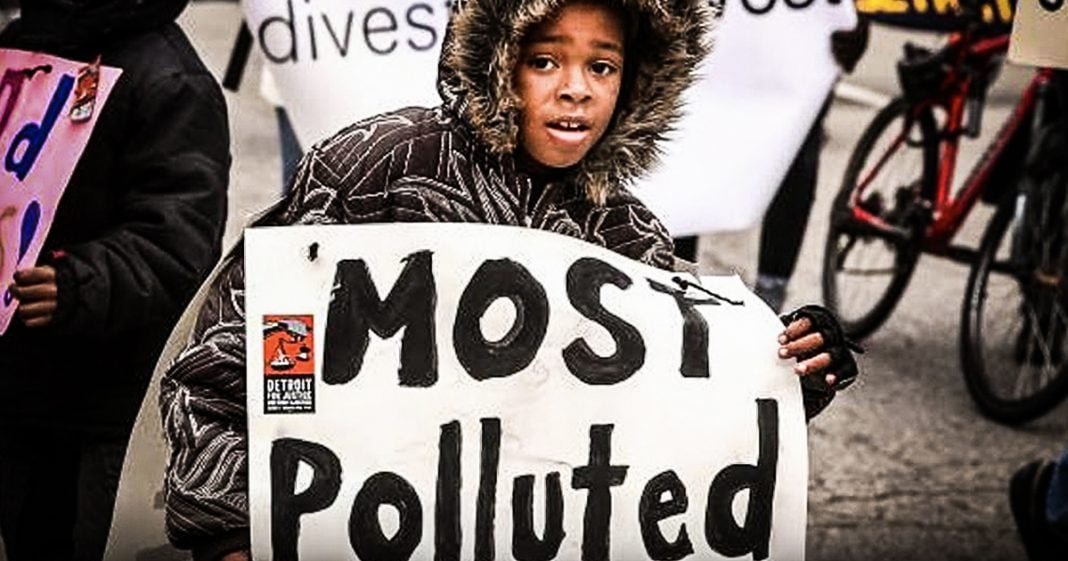 A new peer-reviewed study has been published that shows that even though white people consume and pollute more than their non-white counterparts, it is minorities who suffer the most from pollution. This confirms what many of us have been saying for a long time, and what previous studies have been saying. Environmental issues ARE race issues, and they are also economic issues, but too few Democrats seem to be able to link these all together. Ring of Fire’s Farron Cousins discusses this.

An alarming new study was released earlier this week that shows that minorities in the United States are disproportionately affected by air pollution, and here’s the kicker. The study found that white people pollute more white people. White consumers here in the United States are responsible for the bulk of the air pollution that we have in this country, and yet it’s minorities who are the most adversely affected by this air pollution, even though they’re not even causing most of it. Here’s the numbers. This is startling. African Americans are exposed to about 56% more fine particulate matter of pollution then is caused by their consumption of goods and services. Hispanics, on average bear a burden of 63% excess exposure. Whites, on the other hand, experience a pollution advantage. It calls it meaning they’re exposed to 17% less pollution then is caused by their consumption. This study is examining what they’re calling pollution inequity, which is I pollute less, yet I’m exposed to more.

That’s pollution. Inequity. Part of the reason that African Americans and Hispanics are experiencing more pollution is because of the income disparities between the races here in the United States on average, they’re going to make less money, so they’re going to live in not nicer neighborhoods. Not all of them obviously, but a statistically significant proportion of them. Those communities, as we know, are the ones where corporations like to put their factories. It’s where they like to spew their particulate matter. It’s where they like to dump their toxins into. The waterways happens all over this country, coast to coast, north to south. They target poor communities to dump their trash, and unfortunately, because of income disparity, a disproportionately large amount of minorities live in those areas. So here’s the thing, and it, and I love this story. I hate this story, but I love it because it proves what I’ve read in other articles, what I have reported on here, and yet time after time, I get plenty of white people coming and attacking me saying, how dare you say white people aren’t affected by pollution?

I’ve never said white people aren’t affected by pollution. That would be a very stupid statement to make because it’s completely untrue, but what I have repeatedly said, what past studies have shown in what this study proves is that minorities are more effected by it. That’s the difference. Another thing that people have to understand, and I’ve, I’ve seen Bernie Sanders attacked for this a lot. They say he’s not talking about racial. He wants to talk about income and equality. He was talking about environment. When is everybody going to learn specifically those on the left guys, everything is connected. Environmental issues as this study proves our racial issues, economic issues are racial issues, economic issues are environmental issues and vice versa because all three of these are connected writing right now. Environmental Ism, income inequality, racial disparities. This story links all three, so it’s impossible to talk about economic or environmental problems without it implying that it disproportionately affects people of color.

Here in the United States, we understand that that’s implied. You don’t have to express the say it, so stop acting like some of these people aren’t talking about the issues. They just happen to see the bigger picture of how these issues affect these communities disproportionately. And that’s what this study is talking about. I advise everyone to take a look at this, and this is not, you know, some crackpot study. This is peer reviewed, and it was also funded by the federal government throughout the Obama Administration. They’ve just finally finished it. This is real. This is legit. And it’s alarming. And it shows that racism in the United States is alive and well, not only between human beings, but also in our environmental destruction.