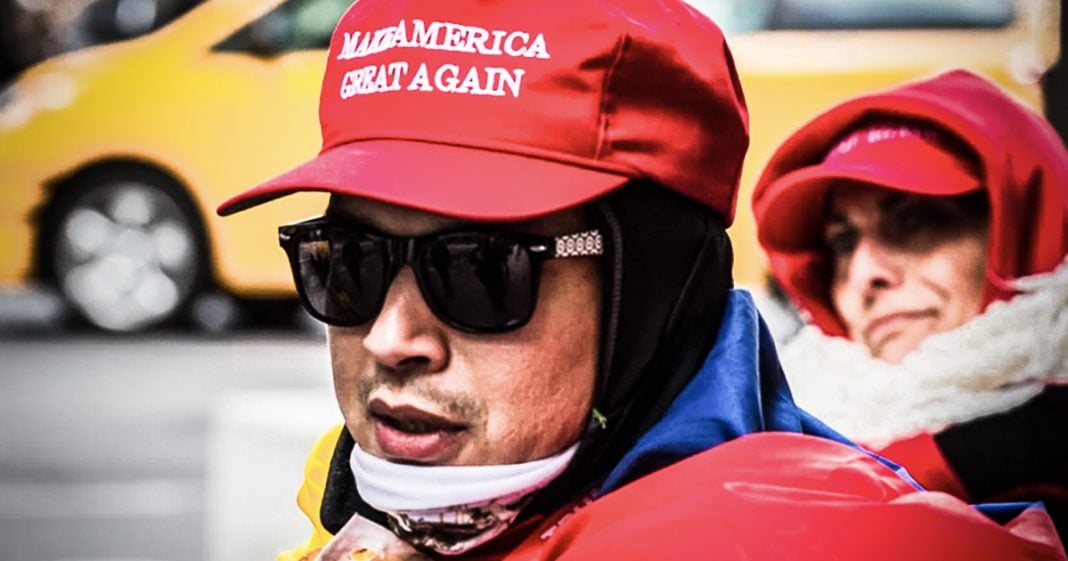 A new app has launched that allows the MAGA hat crowd to avoid anyone who may disagree with their politics. This app leads users to “safe spaces” for the special snowflakes who are so terrified of liberals that they can’t even eat a meal next to them. Ring of Fire’s Farron Cousins discusses the absurdity of these new app, and how it proves all of the talking points conservatives have about liberals are completely false.

You know, one of the things I love about conservatives is that they just can’t seem to keep their talking points straight. And it’s humorous to me because one day they tell us that the left, they’re angry, they’re violent, they’re going to come out there and beat the tar out of you because that’s all they know. They’re just horrible people who want to beat everybody up. They’re all Antifa. And then the next day they tell us liberals are weak. They’re crybabies, they’re snowflakes that need their safe spaces. You know, these cups, soy boys, whatever they want to call them, they’re just a bunch of, you know, idiots so weak. They can’t even fight. Then back to the next day, oh my God, they’re gonna kill us all. And the reason I bring that up is because there is a new app out there called 63 red safe. And what this APP does, uh, it has been described as a Yelp for conservatives is that it helps direct Republican’s MAGA hat wearing Trump supporters on places they can go to basically find a safe space so that they don’t get confronted by those angry, violent or terribly weak liberals.

So after years of telling us that liberals are the snowflakes, liberals are the crybabies Republican’s had to come up with their own app so that they can find safe spaces so that they don’t get interrupted while they’re trying to eat their dinner while also wearing their mega hat. I hope everybody sees the irony in this. One of the places that they have listed as unsafe for conservatives to go is the Red Hen restaurant, which is the one where Sarah Huckabee Sanders, uh, was told to please leave because you’re a horrible human being. But she did get a free cheese played out of it. So, Hey, I guess she’s the real winner there, right? But according to conservatives, the red head is off limits. It is not safe. Do not go there. Now, the idiot who designed this app, uh, Scott Wallace appeared on Fox and friends and he said, you know, his aim is to get politics out of local businesses.

You would just leave the politics out of it. Let’s just be able to have a dinner or be able to go shopping for a new shirt or new shoes, leave politics out of it. I wonder Mr. Wallace, does that apply to a baker who says, no, I’m not going to make you a wedding cake because I don’t like gay people cause cause that’s politics. That’s a religion. Those are things that you want people to avoid in business. So, so I hope you label his restaurant is also unsafe because he keeps politics in his business. He went on to say a typical Republican bs here. I think Antifa was nothing compared to between now and what’s coming in 2020 because he says, you know, this app is going to be especially helpful as we get towards the 2020 election because man that Antifa that thing that doesn’t even really exist.

It’s like a couple of people. I think somewhere they’re going to come out and they’re going to beat the tar out of you if you walk into the wrong restaurant. That’s what this more on is saying right now. And they’re so terrified. So scared of a thing that doesn’t really exist. Antifa that he created this app. So conservatives can go cry in their little safe spaces, be the snowflakes that they are all the while getting on their phones and telling us how much they love drinking those liberal tears. We own the libs. They’re triggered. Yeah. We’re not the ones who have to have an app to tell us where it’s a safe space where we can get a burger. I think you need to understand who’s the real snowflake in this situation. Cause it ain’t us.