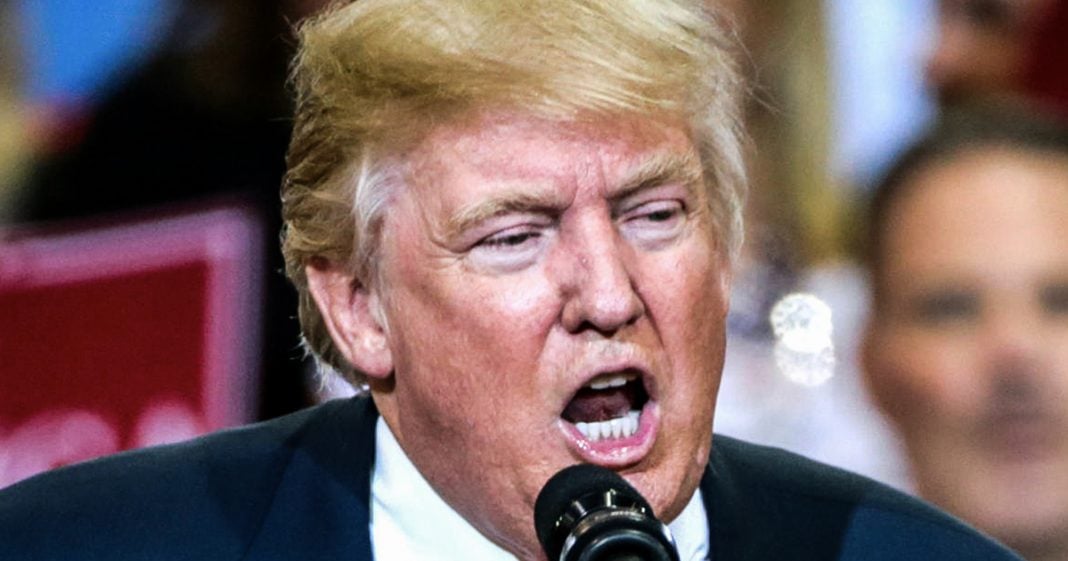 During an interview with Breitbart published this week, Donald Trump gave a bit of an ominous threat to anyone who opposes him. Trump said that he had the “tough” supporters, like cops, the military, and Bikers for Trump, and that these people will certainly get tough if things get to a “certain point.” While it isn’t clear what he means, the threat he’s posing is very real. Ring of Fire’s Farron Cousins explains this.

Earlier this week, a Bright Bart interview with Donald Trump was published where Trump essentially threatened to sick his followers on liberals here in the United States. Here is Donald Trump’s exact quote in his own words. I have the support of the police, the support of the military, the support of bikers for Trump. I have the tough people, but they don’t play it tough until they go to a certain point and then it would be very bad. Very bad. So what Donald Trump is basically trying to tell us here, which is something he has told us repeatedly over the last few years, is that don’t get on my bad side because I’ve got some really tough friends who’ll do whatever I say and they’re going to come beat you up. Now the bikers for Trump part, okay. There they’re not a branch of the military are federal employees. I get that. You know, if you were talking big and bad and a bar brawl, maybe you would say, lie dude, my biker friends are outside.

They’re going to kick your ass when you walk out there. Okay, not okay, but I get it. But you just threatened to sic the military and the police on people who disagree with you on Liberals, on Democrats, and I just want to add what would happen. You know the Guy Maduro down in Venezuela that you guys hate so much? She said he’s just the worst person in the world that’s ever lived. What if he came out and did an interview and he said, all you people who are against me, I’ve got the military, I’ve got the police. Oh, they’re tough. And if they get tough, that’ll be very bad. Very bad. Do you know what we as a country would do if he came out and said that we would already be dropping the bombs on him? We would be in full blown regime change mode because those are the words of a fascist dictator. They are. That’s what those words are. You know who else uses the military and the police to threaten political dissidents? Kim Jong on North Korea has done it for decades.

Okay? We’re living in a dictatorship. This, this little statement by Trump, which again, not the first time he’s hinted at this. That’s what this means. That’s where this puts us. You do not threaten your own citizens who disagree with you by saying, I’ve got the military and they’re tough. It would be very bad. Very bad. Time’s up. Time’s up. 25th Amendment right now. Right now based on nothing more than this statement. You don’t even have to bring in everything else. This man just threatened to sick his own military on US citizens for the crime of disagreeing with him. If we don’t do something now, there is no back. We’ve hit that point, folks. We’ve hit that point. If this man is not removed from office, we’re not going back. We’re not going to get back to what we were. He is turned a corner now. He is insane. He’s nuts and through the mechanisms that are in place for this particular reason, we have to remove him from office. Any person who looks at this man and says, no, I support him. I, that’s a hell of a strong statement. Yeah, this is my guy. You’re the same kind of people who allowed people like Hitler to rise the power. You are. You are. This is how it happens. It’s right in front of our faces and we’re sitting here not doing anything about it. Unbelievable. I don’t even know what else to say about it.