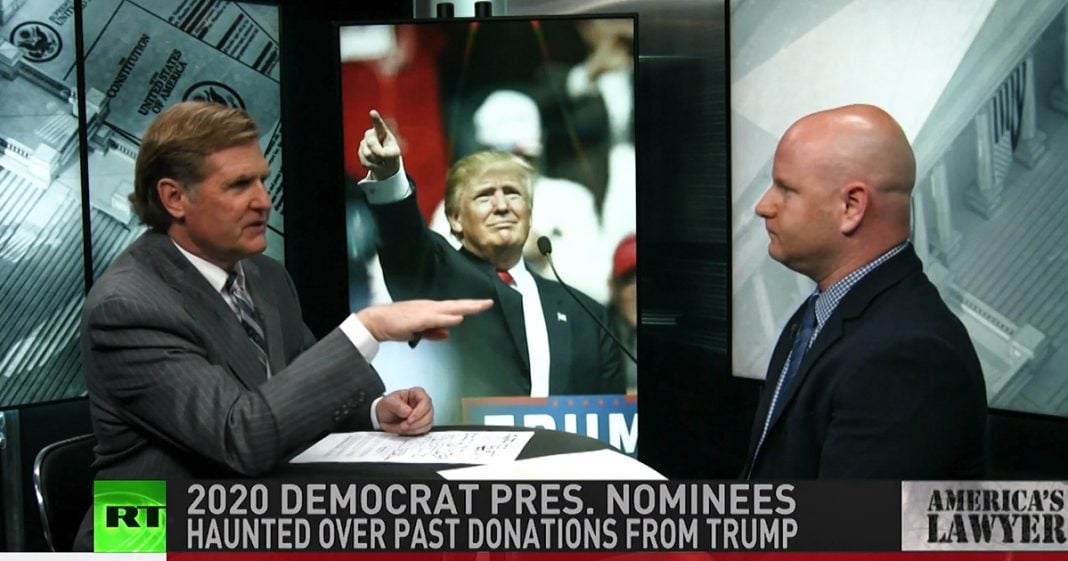 Via America’s Lawyer: Democratic candidates are each trying to convince us that they can beat Donald Trump in 2020 but some of these candidates have Trump connections that aren’t sitting really well with voters. Mike Papantonio and Trial Magazine Executive Editor Farron Cousins discuss.

Mike Papantonio:             Democratic candidates are each trying to convince us that they can beat Donald Trump in 2020 but some of these candidates have Trump connections that aren’t sitting really well with voters. Now, if you’re following these stories, progressive’s are outraged when they find out the Kamala Harris, Cory Booker, Kirsten Gillibrand, Joe Biden, John Kerry, Terry McAuliffe, who was the biggest, Terry McAuliffe took $25 million from Trump, from the Trump family.

And you know, I guess it’s okay to take the money and to just say whatever you want after it’s over to say, I don’t have anything in common. Each one of these people, if you asked them, what do you have in common with Trump? They’re going to say, well, I took his money and you know, at the time it sounded like a good idea. What, Kamala Harris, this, this, this, this story to me is one that I don’t think is going to go away. It’s not, Chuck Schumer is another one.

Mike Papantonio:             This isn’t just going to go away for these people in the next election cycle.

Farron Cousins:                  And, and, and it shouldn’t, we should be examining the financial donations of all of the candidates. That’s how we determine who’s real and who is not. And the big question to me is, why would you, you have Jared Kushner and Ivanka Trump. They actually held a fundraiser bundled tens of thousands of dollars for Cory Booker back in 2013. And they each personally donated a few thousand dollars to his campaigns, up to the legal limit.

And there, there’s no, nobody’s saying any of this is illegal, but it’s certainly, how are you going to stand on, on a debate stage next to the man who helped bankroll your campaign and say, I’m better than him. No, at some point…

Farron Cousins:                  In this same race. So Harris has a very real problem. You have not separated yourself from the people you want to run against and you’re also taking their money.

Mike Papantonio:             She could have prosecuted, didn’t prosecute. Instead, well here’s, here’s what people miss. And you know, it’s, it’s amazing to me that so many Democrats are just okay with this. It’s okay. It’s okay for Wall Street, I call them the Wall Street Democrats and what they are, the, it’s Wall Street is like a soup line for them.

You know, it’s a soup kitchen and the Democrats line up, actually you may not know this, but when freshmen senators and, and freshman congressman first could get an office, they actually bring in lobbyists from Wall Street industry and telling them how they should conduct business. You, you know this story?

Farron Cousins:                  Yeah, absolutely. They, they sit them down and they say, here’s the people you need to know. Here’s what we kind of expect out of you. It’s almost as if the lobbyists are running the show and these are their new students, pupils, they want to mold them and let them know that I the lobbyist, I’m in charge here and here’s what I need from you. It’s disgusting.

Mike Papantonio:             It’s a party totally captured by Wall Street and you know you can have the, the, you know the Clinton bots, the, oh my God, we have to do that. We have to give them what they want or we can’t survive. This whole idea started with Bill Clinton when he said, well, you know, I’ve got to, we’ve got to create this love affair with Wall Street. He started it in a real serious kind of way for the Democrats and it has just snowballed year after year.

Farron Cousins:                  People are going to look at these donations and understand that really with some of these folks, there is no difference between the two. Maybe a little bit different on some social issues.

Farron Cousins:                  Other than that, when it comes to regulations or fighting, you know, powers that are hurting American citizens.