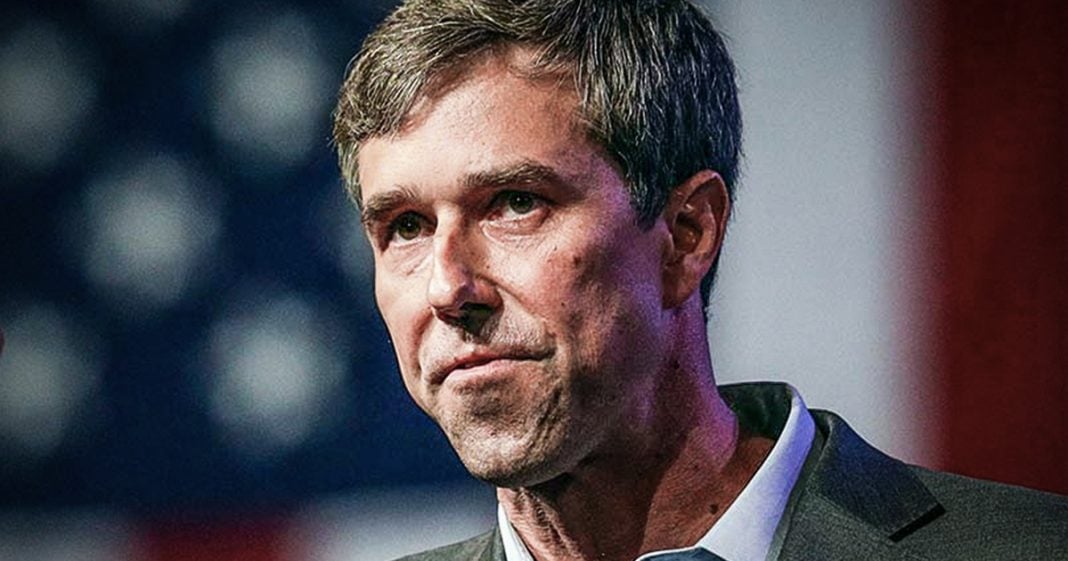 Beto O’Rourke has officially announced that he is running for President. But he doesn’t have a platform and all he’s offered so far are platitudes about being nice and healing the divide in this country. Those are impossible goals that mean absolutely nothing. More importantly, if he can’t beat the guy who couldn’t beat Trump, what chance does he have in a general election? Ring of Fire’s Farron Cousins discusses this.

Well after months of teasing it out, Beto O’Rourke is finally announced that he is officially, as of right now, running for president in 2020. Beto joins an already pretty crowded democratic field, but we expected a crowded field. And to be honest, we kind of need a crowded field. One thing we don’t need though is Beto O’Rourke. Now. I’m not the kind of person that just hates Beto O’Rourke. I don’t hate him. I thought he would have been a great replacement for Ted Cruz. I wished him well. Uh, we did plenty of videos supporting him. However, as a presidential candidate, I do not support Beto O’Rourke and I haven’t actually endorsed anyone, but I am officially not endorsing Beto Work here and I have very good reasons for it. First and foremost, the guy basically gives us 50 shades of grey style teasing for months about whether or not he’s going to run for president.

Then he finally announces it and he has no platforming. The guy literally has no ideas. In fact, even in interviews in these months of teasing, he’s saying, well, we should have a debate about this. Well, we need to be thinking about this. We should be talking about this. He was never once able to come up with a plan other than his plan to crap on other people’s plans like Medicare for all or getting rid of ice and returning those duties back to the agencies that used to handle them before ice was created 16 years ago. That’s all these God, he is essentially Howard Schultz. I don’t have any ideas of my own, but I can tell you that everybody else’s ideas or garbage, that’s what Beto or work is. He has no plans and he has had more than enough time to come up with plans. So no, I don’t trust him.

I don’t trust his mealy mouth. Well, let’s have a debate about why we’re in Syria. No, we don’t need to have the debate. We know it’s wrong. Let’s get out. End of story. Oh, let’s have a debate about whether or not Medicare for all. No. We know that we’re getting screwed over by hospital corporations, health insurance industry, big Pharma. We know that they’re screwing us over. We know Medicare works very well. Let’s expand it to everybody into story. Beto O’Rourke is too weak. And think about this for a second. First of all, okay? I don’t even understand why people are so excited. He jumped in, he doesn’t stand for anything and he couldn’t beat the guy who couldn’t beat Donald Trump yet. We expect him to beat Donald Trump. Explained to me in what universe. That makes sense, right? You had a guy that was running against Donald Trump, ted Cruz.

Cruz loses to Trump. So then O’Rourke comes and runs against that loser and then O’Rourke becomes the loser. So now we’re expecting loser be to run against person A. Folks, it doesn’t make sense. And I’m not just trying to sit here and say, Beto O’Rourke is a horrible person. I do not like his voting record. I do not like his willingness to go vote with Republicans instead of progressive’s how he even endorsed a Republican over a progressive candidate in 2018 this guy ain’t it. He is not what this country needs. He has no plans or ideas, but he has a hell of a lot of platitudes about healing the nation. Bringing us back together and you know what, a decade ago that probably would have worked really, really well, but not today. We have one side that wants to get violent. One side that’s had plenty of people arrested because they’ve tried to carry out that violence or because they’ve been planning it, you can’t heal that kind of divide.

What you can do is enact strong social policies that benefit everyone to help heal the suffering. Here in the United States, you reduce overall suffering, you’re gonna reduce the amount of violence and heal the divide as a side effect. Beto doesn’t seem to understand that Beto had no reason to join this election cycle. He did it because he’s all about him and we have already seen the cult of personality develop around him. Some of the people who are so excited, the reasons they offer are because he has name recognition and because he can raise a lot of money and if you’re basing your choice for president on those two things, then I have, there’s some very sad news for you. You’re part of the problem too. We need to be running on issues. We need to be voting on issues, not based on somebody’s name, personality or how much money they can raise. Those are things of the past. Let’s leave them there.