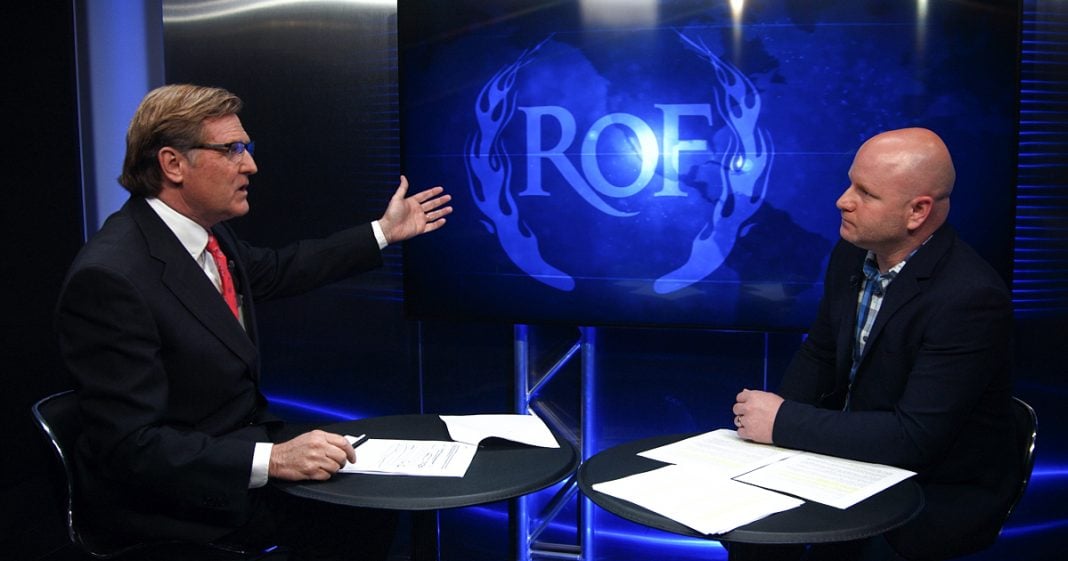 The Trump Administration has put us back into a new Cold War, thanks to his incompetent, war-hungry advisors. By pulling the US out of the INF treaty with Russia, this administration has launched a new arms race that could dwarf what we saw during the decades of the Cold War. The only people who come out on top of this are the defense contractors. Ring of Fire’s Mike Papantonio and Farron Cousins discuss this issue.

Mike Papantonio:             The Trump administration has put us back into a new Cold War, thanks to his war hawk advisors. This is the worst group of advisors you’d ever want to have in one room. Matter of fact, this was, this story again, it was you always count on social media. You never count on corporate media to tell these stories. This, I love this quote. This is in Truthout and it was just the story so well done. It says, Mike Pompeo. John Bolton. Elliott Abrams. Mike Pence, Donald Trump. These are the men standing the light, standing the lighthouse rail to guide us through dangerous and uncertain waters. Crisis of confidence does not do it justice when I think about this.

I, it and that’s it. That’s exactly it. The new Cold War is underway. Now, look, you know, sometimes I have to give us some props when we call it, right. Okay. We called this right after, if you think about it, right after we saw John Podesta and the Hillary Clinton, Hillary camp creating all this Russia hysteria. Remember the stories we did? We said the next thing is going to happen is the arms industry is going to move into this with Russia.

And they’re going to create this, A create really bad relations, promote the bad relations, get the weapons industry ready to go both on, well on all of them, on Russia, on Venezuela, on Iran, on China. That’s what’s happened. And you have these, you have these knot heads that I just read out, that is the team putting us in the middle of, of a Cold War because hey, they represent the arms industry, which is one of the biggest interests, industries in America, in the world.

Farron Cousins:                  Well, and what’s interesting is, you know, Trump at the advice of these boneheads pulls us out of the INF and the public is actually okay with it. And part of that is because we had spent years fomenting this Russia is bad, Russia is going to get us Russia hysteria.

Farron Cousins:                  And so the administration actually used that to their advantage even though they were, you know, so now they pull us out of this and then you have that same crowd who said, this is exactly what Russia wants. No, it’s not what, Russia doesn’t want us to build up our nukes.

Mike Papantonio:             Let’s, let’s back up a little. Let’s, let’s do with a story that I think you did. I, it’s been so long. This is such an old, I mean this has been developing a long time. How about it doesn’t just start with Trump. It starts with Obama violating what the Russians perceived as the INF treaty where he started putting missiles in places that we had agreed not to put missiles.

Second part of that, Hillary Clinton ran that program. He, they started edging closer and closer to Russia. The INF treaty became meaningless. It was under Obama where it started. That’s where this bad blood started. The UK, which we don’t, most people don’t keep up with the UK and what they’re doing politically. The UK has been in a Russia hysteria for 15 years now. And so they, they were behind the scenes promoting this demise of the INF under Obama, under Hillary Clinton.

Now add to that like pouring gasoline on a fire, the Trump administration, which, you know, this group of people I just read, Pompeo, Pence, Elliot Abrams. These are people who want to go to war because they are owned and operated by the arms industry. And so I don’t know where this, I don’t, I don’t see an end, I don’t see a good ending to this, do you?

Farron Cousins:                  No, absolutely not. And I think it’s important to understand that, you know, yes, we did have Putin come out a week or two ago and he said, look, we we’re going to respond to anything the US does. And everybody said, well look, there it is. This, this man Putin is a lot of things. He is not stupid though. He wouldn’t, I honest to God, do not believe ever he would launch a nuclear attack on the United States.

But he understands, he knows US foreign policy history. He sees what we do, we make stupid decisions, we make rash decisions, and he’s got to look like a leader in front of his people and say, listen, these folks are nuts. And we have to admit that we’re nuts on foreign policy.

Mike Papantonio:             Yeah, and he’s got big Mr. Mustache Bolton, who every week is saying something so crazy that corporate media ignores him like he’s sane. Let me, let me thank, let me, let me do some thanks here. Thank you, CNN. Thank you, MSNBC. Thank you corporate media. Thank you, John Podesta. Thank you Hillary Clinton for making all this possible. Now that’s the way I see it. John Podesta, as I’ve said so many times, is a complete buffoon and the, the whole that move, the whole organization running Hillary’s campaign was a gaggle of buffoons.

So these buffoons did the impossible. They lost an election to Donald Trump. So they start with their talking point Russia this, Russia that, hate Russia. We still, I started seeing it with America’s Lawyer for gosh sakes. You know the stories I do are domestic stories and, and, and so all of a sudden now the arms industry saw an opportunity, didn’t they?

Farron Cousins:                  Yeah, they did. They’re, they are the only ones who are going to come out on top of this. The US isn’t better off. Russia’s not better off. Neither country needed or actually wanted this. The people who wanted it are the people who make the missiles, the people who make the warheads and the planes and the tanks and the guns. They’re going to make a fortune because we’re already starting to ramp up production. Russia is going to ramp up production because again, we’re right back in the sixties and seventies and early eighties of Cold War nuclear arms race.

Mike Papantonio:             You ought to go take, take a look at this article. It’s, it’s, it’s torture fans and war criminals determine US foreign policy. I would add to that torture fans, war criminals, US corporate media and John Podesta, you know, fan the claims. This in truth, Truthout article is just, well, really well done.