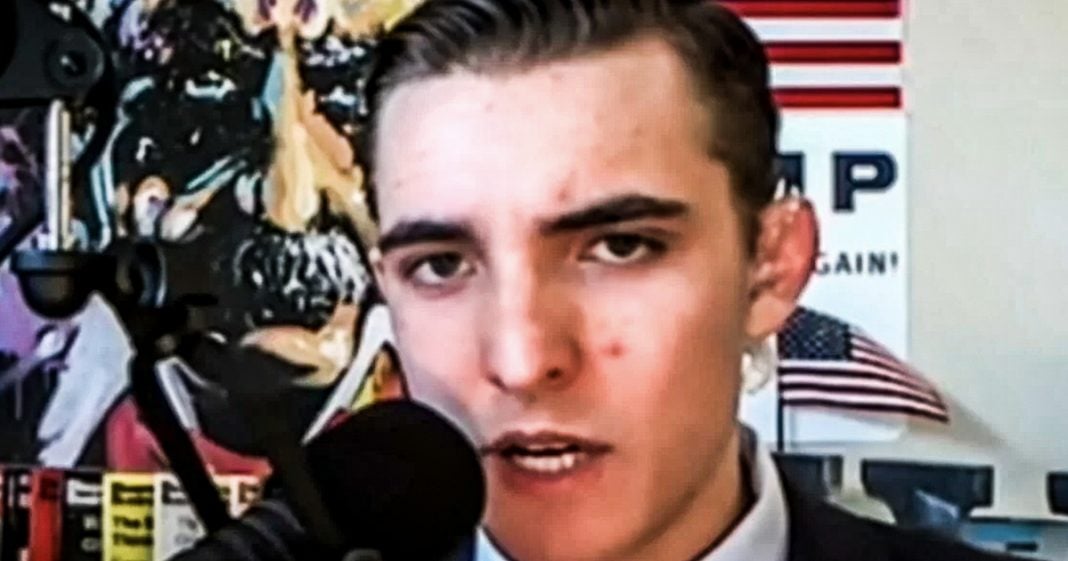 Jacob Wohl, the Trump Twitter troll who gained national attention by making false accusations against Robert Mueller, is once again in the spotlight for the incredibly level of stupidity that he showed the world in a new documentary. Wohl tried to show in the film that he filed a police report following an abusive Twitter message was sent to him, but what he didn’t realize people would find out is that he MADE THAT ACCOUNT that sent the message. This would mean that the police report is fake, which could land Wohl in jail. Ring of Fire’s Farron Cousins discusses this.

You know, it’s easy to make fun of a lot of Trump supporters, right? You know, you see these people online, they deny reality. They don’t have any facts or logic to back up their arguments. They just argue out of pure emotion and a co like devotion to Donald Trump. And one of the biggest, Eh, I don’t want to say biggest people who does this, but one of the biggest supporters of the president who clearly has no common sense whatsoever is Jacob Wall, who most of us know as the Trump troll who used to reply to everything Trump said with some kind of suck up comments until of course he got kicked off of Twitter for creating fake accounts. And it’s those fake accounts that he was creating that might actually land Jacob Wall in prison. Here’s what’s happened. Jacob Wall along with two other right wingers, a one by the name of Ali Alexander and one by the name of Laura Loomer, who seems to have her claim to fame being her being kicked out of places they wanted to create a documentary about representative Ilan Omar.

And they basically wanted to say that she married her brother so that he could get us citizenship. So they traveled to Minnesota recently to make this little a fake documentary and as part of the documentary, which is now released, Jacob shows us a death threat that he received on Twitter and then he goes into the police department. He gives them this information and he makes a files a complaint, says, I’m being threatened with death by this man. Unfortunately for wall, he didn’t realize that not everybody’s as dumb as he is and the account that he showed that death threat coming from had already been exposed as one that he had created. He created a fake account and then sent himself a death threat and then reported it to police as if somebody was trying to come and harm him. Now, I don’t know if you remember what two weeks ago, a man by the name of Jussie Smollett, who’s now been arrested for filing a false police report saying he was attacked by some Manga folk.

Well now we have a maggot folk saying that he was going to be attacked by some crazy left wing or on Twitter filing a false police report just like Jesse Smollett and hopefully the Jacob Wall story ends the same way that Jussie Smollett story does that he gets arrested, that he gets his little mug shot and that he’s going to stand trial and face possible prosecution and a little bit of time behind bars. Maybe that will help this disturbed individual realize what the hell he’s doing. I’m not kidding when I say that. I do believe there is something wrong with this guy. If you had ever gone through, and I know a lot of folks have and just read the comments that he would say to Trump on Twitter, these are not the actions of somebody with a fully functioning normally functioning brain. Jacob Wall needs help and he’s clearly not getting that help.

Instead, he’s being Egged on by these frauds like Laura Loomer and olly Alexander who I have actually had the pleasure of being opposite of during a debate where the guy throughout no facts, he lied repeatedly. I actually had to pull up my phone and show him facts because he was lying about it during the interview was phenomenal. I loved it. But nonetheless, these are the kinds of creepy little creatures that are thriving under Donald Trump and get this. There are also being funded by the right wing machine because I had at least olly Alexander has gotten quite a bit of money from the Mercer family, big time Republican donors. So yeah, they’ve got the bankroll, but unfortunately they don’t have the brains to pull it off. And that is why Jacob Wall is about to be in a world of legal pain because he’s too damn stupid to know that you can’t send yourself a death threat when the world already knows that you created that fake account. This story’s going to get a lot more fun before it’s over for everybody, except of course, Jacob Wall in his creepy little Trump creatures.