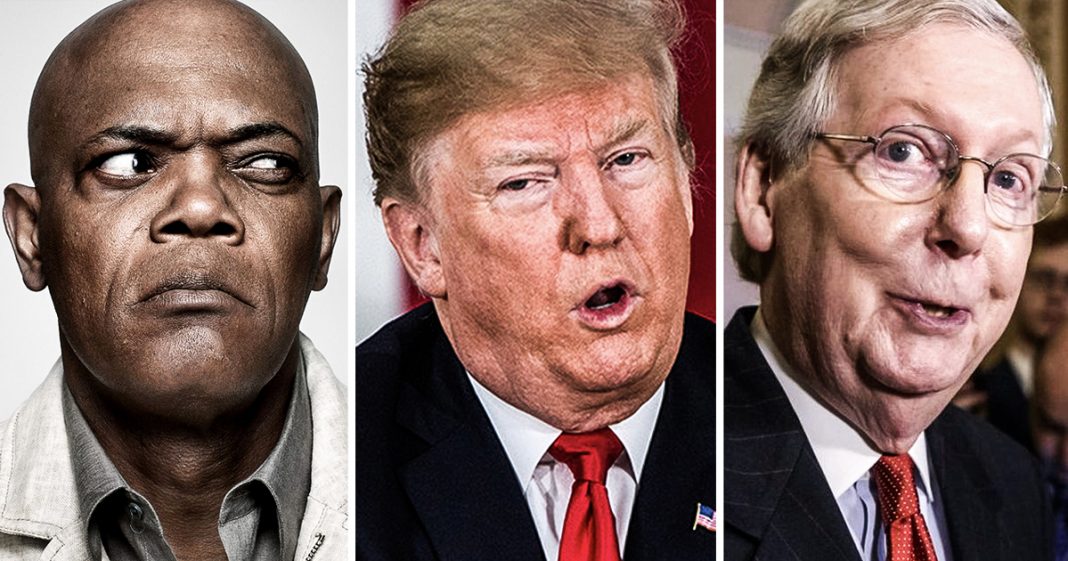 During a recent interview with Esquire magazine, actor Samuel L. Jackson held nothing back when speaking about Republican leadership today. He said that these were the same people who, when he was growing up during segregation in Tennessee, would call him the N word and would tell everyone that whites were becoming outnumbered. Jackson says that he’s angrier today than he was back then, and it is likely because they mask their hatred with nice suits and coded talking points. Ring of Fire’s Farron Cousins discusses this.

Actor. Samuel L. Jackson recently sat down for an interview with Esquire magazine where he did not hold anything back when giving his thoughts on not just the current administration, but pretty much the Republicans at the top of our federal government and Jackson who grew up during the time of segregation in Tennessee in the fifties and sixties understands a lot about what it means to be oppressed, what it means to be treated as not quite a human being. And according to what Jackson told the magazine, he sees those same behaviors in the racist from the fifties in Donald Trump and Mitch McConnell. Here is exactly what Samuel L. Jackson said. Excuse the language, but these are his exact words. I’m angry or now about it than I was then just because I see these guys and I know these are the same guys, Trump and all those assholes, Mitch McConnell, they’re all the same fucking guys.

And when I hear their voices, I hear the same voices, those Twaings where they didn’t specifically call you inward, they said, Negro, the Negro us. You know, as somebody who’s lived in the south for my entire life, I, it’s scary because even as a white person, I, I’ve heard that. I know the phrase he’s talking about. I know the voices he’s talking about because we still hear it in these areas. It still exists, and for somebody like Samuel L. Jackson to come out and say, I’ve lived through this. I went through this. I was apart. I was on the receiving end of it, and I see it today in these Republican leaders. You hear it in Trump’s voice. You hear it certainly in Mitch McConnell’s voice, but that’s not all. It’s not just the, you know, deep seated racism that’s within these people. He even points out that the talking points are the same today as they were back in the 1950s because he said back then you would have these white people saying, Oh, why?

It’s they’re going to be outnumbered. Soon we’re going to become the minorities and the blacks are going to take over, which is exactly what we hear coming from Republicans today. We did a segment on it last week, former Maine Governor Paul LePage saying that the whites are going to be out numbered. That is a common talking point and apparently it’s been around since the 1950s and that tells you everything you need to know about the Modern Day Republican Party. These people, they may not have called themselves Republicans at the time, but their mindset never changed. Just their political affiliation. That is who they are. That is what they grew up as, that as how they raised their children. Hopefully their children were smart enough to not follow in their footsteps, but that same racism that people like Samuel L. Jackson lived through in the 1950s is still alive and well in the United States today. It’s just that the people in charge, they’re not wearing the white hoods. They’re wearing very nice suits going to work in Congress and the White House every single day.