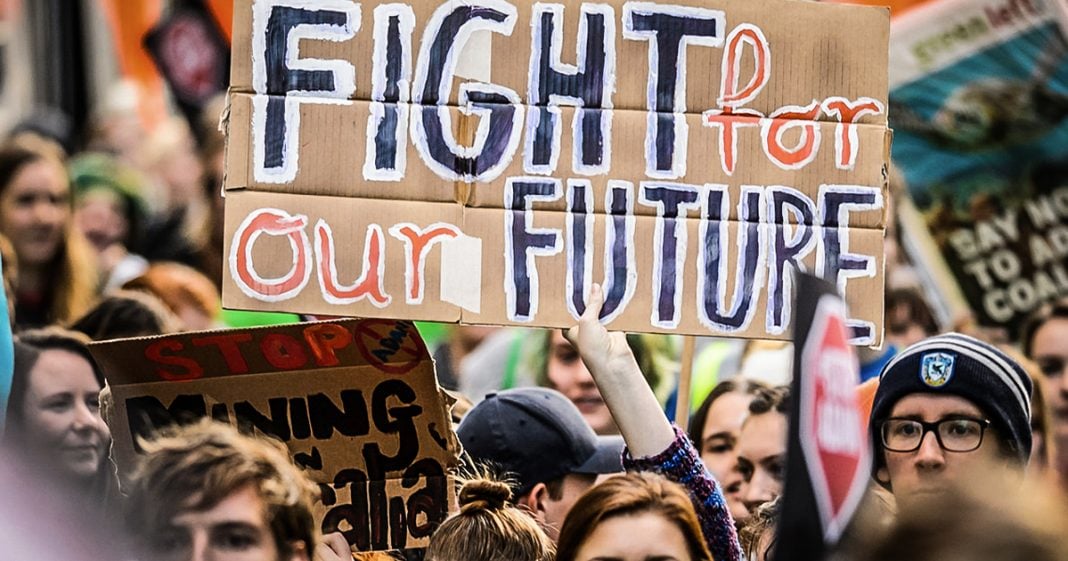 High school students across the United States will be “striking” by staying out of school on Friday to call attention to climate change and to demand action from our elected leaders. They, unlike any other generation, will have to deal with the threat of climate change for their entire lives, and they are counting on the ones who caused this problem to at least start working on solutions until they are old enough to hold office and do it themselves. We owe it to them, as Ring of Fire’s Farron Cousins explains.

Tomorrow across the United States. Massive school strikes are going to be taking place among high school students. These students are going to either walk out or not show up to school and it’s all to raise awareness about climate change and to demand action on the issue from our elected officials. These protests, these strikes, these walkouts, whatever you want to call them, have actually been happening around the globe since last September. Students in countries all over the world staging these strikes to bring attention to the biggest issue that the world is facing as a whole and that is climate change and the people engaging in these strikes that people doing these acts of, you know, disobedience to raise awareness. They’re the ones and they may actually be the only generation other than the ones that come after them, the that have to deal with climate change as a reality for their entire existence.

Now those of us, even the millennials when we were first born, yes, greenhouse effect, those things, those were words. Those are phrases we had heard, but it was a far off problem and we weren’t expressly living through the consequences. Right. Then at that time, you know we thought I, you know the future generations, they’ll fix this. It’s not going to be an issue. We don’t have to worry about this global warming thing. Everybody’s talking about, well now we do and as you go up the ladder of older generations, they lived most of their lives. Not even knowing that climate change or global warming could ever even be a thing, but these students staging these protests their entire lives, this is what it’s been. We’ve known the climate change is real. We’ve known that human beings calls it and for most of their lives they’ve actually seen the actual effects of it. I, we have people in high school right now who weren’t even born yet when Hurricane Katrina hit. That’s how long these things have been and that’s how long we’ve been putting off these problems and if you think like the president does the climate changes and real, this is all a hoax. Yo climate scientists are just trying to get rich quick off this idea and I’m still not sure how that works. Then I suggest you get to take a look at what’s happening in the Midwest literally right now, right this second, that bomb cyclone that has essentially formed a category two hurricane in the middle of the United States, not over water in winter.

Okay. Hundred mile an hour winds in the Midwest right now. And it wasn’t something that had been predicted for weeks or something that had been tra, uh, tracked. These people were caught unprepared suddenly in hundred mile an hour wind storms. That’s climate change folks. Climate change makes things worse. Climate change makes things like this more likely to happen. So these students could not have picked a better time to do their demonstration because right now the United States is getting absolutely hammered by a storm that was made worse and possibly even made possible because of the climate change scenarios that they’re going to have to deal with. All they’re asking us to do, all they’re asking our leaders to do is to take it seriously and start doing something. Because these kids aren’t old enough to run for office yet and won’t be most of them for another 10 years. So we’ve got to do something in that time to show them that we care. Because if we don’t, when these people get old enough to run for office, when they finally take over and they start fixing things, they’re going to have to do drastic things that are going to affect all of us in ways we never imagined. It will be the right thing. It may not be comfortable, but we’ve left them no choice. And that’s what we have to realize. And that’s another reason why we need to start taking action today.