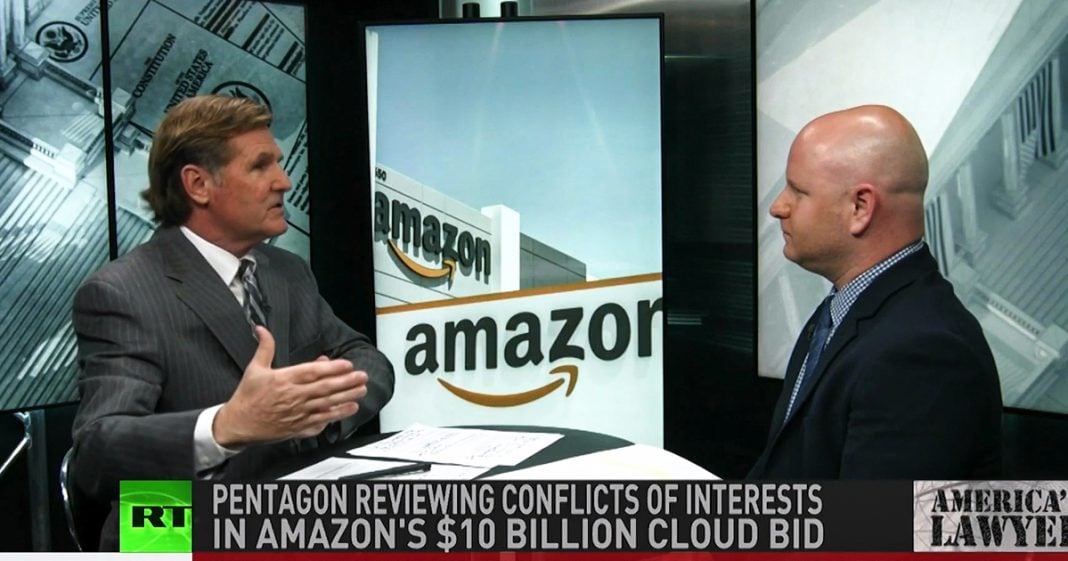 Via America’s Lawyer: Mike Papantonio and Trial Magazine Executive Editor Farron Cousins discuss reasons behind the drawn-out battle over a $10 billion contract between Amazon and the Pentagon, after the cloud-computing company Oracle filed a lawsuit alleging that the Pentagon rigged a major contracting process in favor of Amazon.

Mike Papantonio:             Amazon’s profits have more than tripled in the last two years. And it isn’t because people love buying stuff from their website. Their rise in profits is partly due to the companies government contracts for cloud computing, but their biggest prize, a $10 billion contract is now held up in the courts. I have Farron Cousins from the Trial Lawyer Magazine to talk about it.

We, seems like we’re doing a lot of stories on Amazon lately. This is a story that oddly enough, you know, at least written corporate media is picking up on it. A great story that actually appeared in the Wall Street Journal and in the Mother Jones. Here’s the deal, there’s this thing called the JEDI cloud. You know, by it’s definition, the JEDI cloud sounds pretty ominous by itself.

So Amazon bid on being able to have the JEDI cloud to be something that they take care of it and they house and they make all the money on it, $10 billion worth of money on it. And now we find out it wasn’t a fair fight. We find out that Amazon might have tried to tip the scales of justice where it comes to fair play on this case.

Farron Cousins:                  Right. I, I mean basically to, to strip it down to the bare bones, Amazon essentially had a guy on the inside, a man by the name of Deap Ubhi. He worked for Amazon. He leaves Amazon, goes to work for the Defense Department, is there for about a year. And while he is there, he convinces the defense, the defense department, we need to get into cloud computing, move away from traditional servers, go to cloud computing.

Mike Papantonio:             Lots worse than that. First of all, let’s talk, let’s talk the JEDI cloud. It’s, as I say, it sounds pretty ominous, but it’s where the military will store all of their digital information in one place.

Mike Papantonio:             Now, I don’t know if that sounds like a good idea, but somebody along the way said, yeah, let’s store everything in one place where somebody can hack into it just in one place and make it convenient. But here’s what’s interesting. Oracle filed this lawsuit. Oracle had a similar program that they were trying to sell. Now what this cat did that worked for Amazon and then worked for the Defense Department then worked for Amazon again.

What he did is he tried to move the ball. He’s, the conflict was ridiculous, but he tried to move the ball to where all of the standards for the contract fit directly into what the standards were at Amazon and varied from the Amazon, it varied from the Oracle standards. In the process, I think what’s incredible though is he actually spied on the com, on the competitors while he was working with the government.

He got information about competitors that were coming in to try to get the same contract. And I, you know, somebody at Amazon said, yeah this is okay with me. Business as usual. What’s your take?

Farron Cousins:                  Well it’s interesting cause I don’t think enough people appreciate the fact that Amazon, the bulk of their profits are coming from these government contracts. You know, this $10 billion one that’s up in the air right now for them, this was not the first, it’s not going to be the last, but it’s what’s driving more than 50% of their yearly profits. And as you already pointed out, before they got into this government contract business, they were pulling in a couple billion a year and then last year suddenly they’re making more than 10 billion a year.

And again, more than half of that is from these kinds of contracts. So they have this guy, this Deap Ubhi, who goes in there, does everything he can to steer it towards Amazon. Spying on the competitors, knowing what they’re doing, still being friends with Amazon, hyping Bezos up to the Defense Department. And suddenly Amazon gets awarded the contract until Oracle has to step in and say, wait a minute, something isn’t right here. The, the Defense Department says they did everything properly, but we have all of this info showing that no, Amazon was gaming it from the start.

Mike Papantonio:             Okay. So you got here, you got the obvious conflict. He works for Amazon then works for the government and then works for Amazon. He’s there as a plant by Amazon, very clear. Next thing is we find that he’s using that position to, as you point out, spy on his competitors. Thirdly, what he’s doing is he’s moving the standard to a point to where it fits in perfectly with Amazon and way different from Oracle.

And then he uses his position really to, this is where it really gets weird. Amazon as an inducement to him, actually offered to buy a startup company that he owned. In other words, that’s, that’s, it sounds like bribery. I mean, I, if you take a look at what the complaint is, the complaint is well, no, we’re saying there’s a, there’s a conflict of interest. It’s far more than that when you start looking at this.

I wonder if, this is kind of sounds like a payback from Trump kind of too, doesn’t it? I mean, if you want it, if you want to go after Amazon, I mean Bezos and Trump, you know, not a, not a match made in heaven. And Trump wants to go after Bezos. This is a, this is pretty good vehicle. This is a $10 billion vehicle.

Farron Cousins:                  And you couldn’t even argue he is doing it politically here. There is plenty of real evidence to show that Amazon should not be awarded this contract and, and not even all of it has to do with the conflict of interest here. They just had a massive data breach that took place I think the day or two before black Friday of this past year, 2018 that leaked user data addresses. Some people may have had their financial information stolen. Are these the people we want controlling the government secrets, you know, the military secrets, all of that in their cloud when they can’t even keep our, our credit card information safe?

Mike Papantonio:             Yeah that’s, that’s the bigger issue here, isn’t it? We’re going to have all of this, all the most, most special military digital secrets in one place, controlled by the company who blew it. Has blown it a couple of times, and now we’re saying, yeah, we’ll pay you $10 billion to do that.