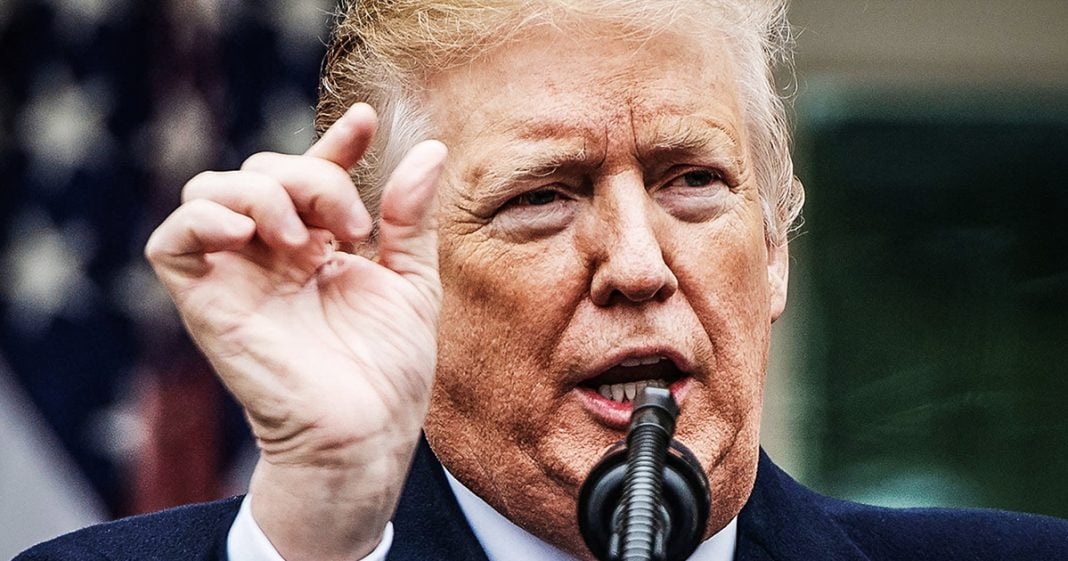 Donald Trump will believe anything that Fox News has to say, and on Tuesday of this week he took them at their word when they brought on a lobbyist claiming to be a founder of Greenpeace who said that climate change is a complete hoax. Not only was the guest, Patrick Moore, NOT a founder of Greenpeace, but he’s spent most of his life working as a lobbyist for fossil fuel companies and other corporations. Ring of Fire’s Farron Cousins explains how Trump’s tweet shows how out of touch with reality the President really is.

Donald Trump spent his Tuesday morning watching Fox News and on Fox and friends, he saw a man by the name of Patrick Moore who claims to be a cofounder of Greenpeace, even though he’s not. And Patrick Moore, the alleged former environmentalist, said that climate change was a complete hoax. This cause Donald Trump to tweet out the following, Patrick Moore, co-founder of Greenpeace says, the whole climate crisis is not only fake news, it’s fake science. There is no climate crisis. There’s weather and climate all around the world. And in fact, carbon dioxide is the main building block of all life. Wow. Trump tweeted, wow. Yeah. Amazing. Wow. This guy, Patrick more just, just blew the whole climate hoax out the window. It’s all fake folks. All of it. 100% because Patrick Moore, a guy who’s literally lying about where he came from, says that it’s fake. Now, Patrick Moore is a guy who spent his career other than the time when he was with Greenpeace back when it was trying to be a pro corporate organization.

Uh, and it wasn’t even Green Peace in the USA. It was Greenpeace Canada. Nonetheless. Uh, he spent most of his career actually working for corporations as a consultant, which is really just a fancy word for lobbyists. And in fact he’s such a disgusting pro corporate hack that he’s actually tried to tell us that Monsanto’s glyphosate in roundup, which has been called a probable human carcinogen by the World Health Organization. He said it’s safe to drink. And actually there is a video that we’re going to show you have Patrick Moore being offered a glass of glyphosate to drink. Here it is.

Do not believe that glyphosate in Argentina is causing increases in cancer. You can drink a whole quarter of it and it won’t hurt you. It’s you went to drink some. We have some here. I’d be happy to actually, no, not really, but not really. No, it wouldn’t hurt me if you say so. I have some guns. I’m not stupid. Okay. So you know, but I know this is dangerous. I know people try to commit suicide or that it would fail. Failure regularly. Tell the truth. It’s not dangerous to humans. No, it’s not. So are you ready to drink when in class? No, I’m not an idiot. Interview me about Golden Rice. That’s what I’m talking about. Okay, then it’s finished. Then the interview is finished. Let’s say that’s a good way to sell things. You’re a complete jerk,

so that’s the man that Donald Trump thinks is telling the truth about climate change. The man who told us that a popular weed killer that’s been linked to cancer is totally safe to drink, and then when literally offered a glass of it, said, no, I’m not an idiot. Yeah, because you know it’s not safe. Just like you know that climate change is real, but I do applaud you Patrick more because what you did was showed the entire world how stupid the of the United States truly is. I mean, Donald Trump will literally hear anything on Fox News and believe that it is the truth. Without a doubt, without questioning it. If Fox News said it, it has to be true. Donald Trump is actually the perfect example of the typic, a typical Fox News viewer. They have no capacity for independent thought, no capacity for rational thinking. They just hear something and automatically it becomes the truth to them, and Trump is no different. In fact, he’s even more dangerous with it because he happens to be the president of the United States. For now, climate change is real. One Moron going on TV and lying about it does not prove anything incorrect. When you have more than 97% of scientists around the world, more than 97% of scientifically peer reviewed papers telling us this is real. When Trump’s own administrations papers have told us this is real, probably should take their word for it over some guy who can’t stop lying about everything he’s done in his entire life.